Exclusive RAF classified the Stansted 15 as an ‘enemy force’

Note point 4 which defines enemy forces as ‘any individual ... that attempt to deliberately delay and/or disrupt the mission’

The RAF issued its sinister definition of protest in the wake of a major demonstration at Stansted airport, where peaceful demonstrators chained themselves to the wheels of a deportation jet bound for west Africa.

That flight was cancelled and 15 activists from the End Deportations group were convicted under a draconian anti-terror law, in what human rights groups warned was an attack on freedom of expression.

With the “Stansted 15” due to be sentenced next week, the Morning Star can now reveal the shockwave their protest sent through the government’s hostile environment policy.

Stansted airport was so concerned about a copy cat incident that it banned the Home Office from using its runway for deportations to Nigeria and Ghana.

“We had some success in convincing them to allow what they consider to be lower risk flights to continue operating from Stansted,” civil servants noted.

“However ... They are currently maintaining their refusal to allow flights at higher risk of protest activity (Nigeria, Ghana and Jamaica) to operate.” 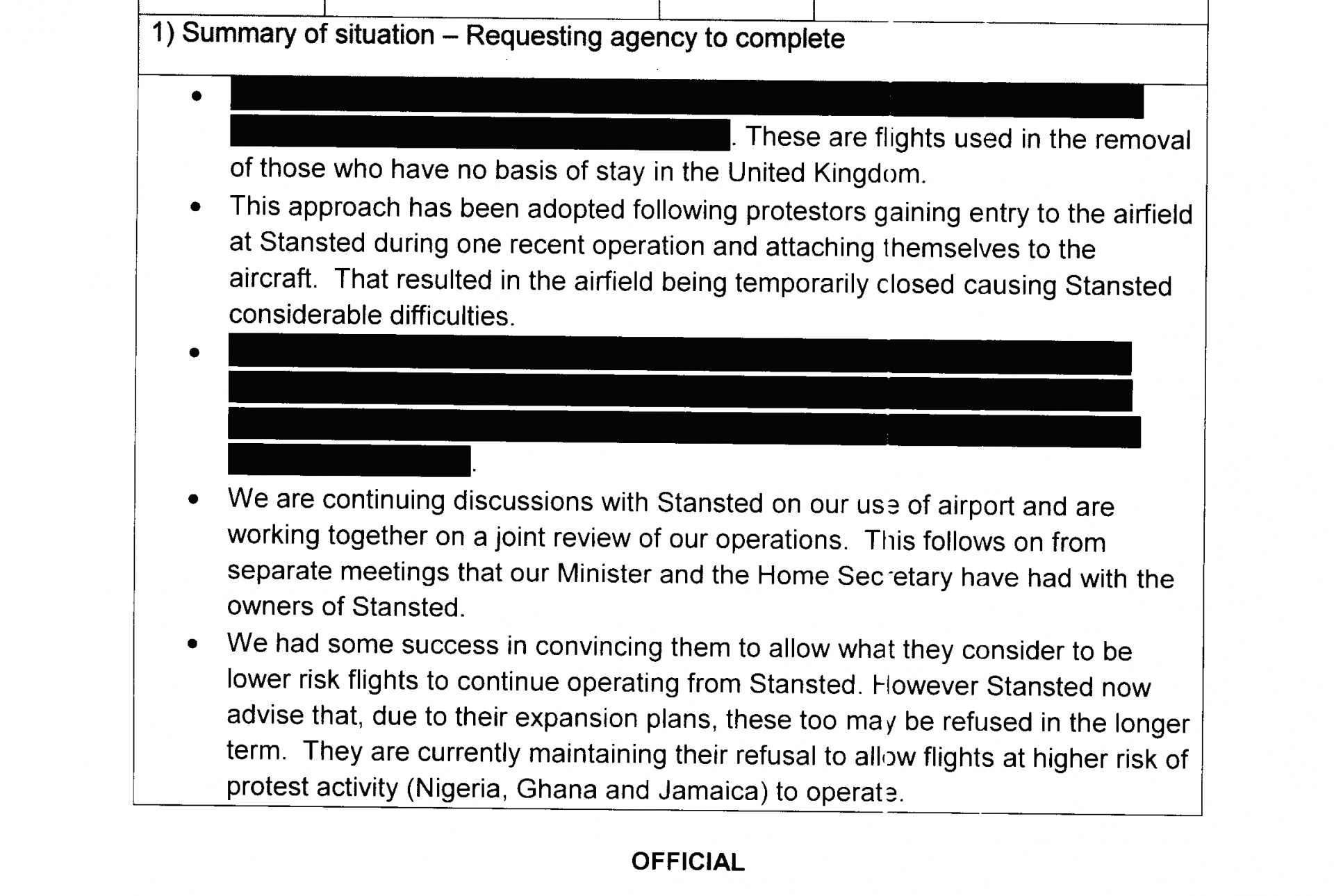 Stansted’s unprecedented slapdown sent the Home Office into a tailspin, with civil servants failing to secure an alternative departure point.

Eight other civilian airfields across England, from Southampton to Birmingham, were deemed unsuitable.

With just a week left before the next deportation to west Africa, the department desperately asked the Ministry of Defence (MOD) to let it use RAF Brize Norton in Oxfordshire.

Former Tory immigration minister Robert Goodwill begged his then counterpart in defence, Sir Mike Penning, for permission to use a military runway.

A day before the flight was due to take off, Mr Penning finally agreed to provide assistance.

“I note the difficulties your department is facing and I am content to provide assistance under Military Aid for the Civil Authority (MACA) in this exceptional circumstance," he wrote. 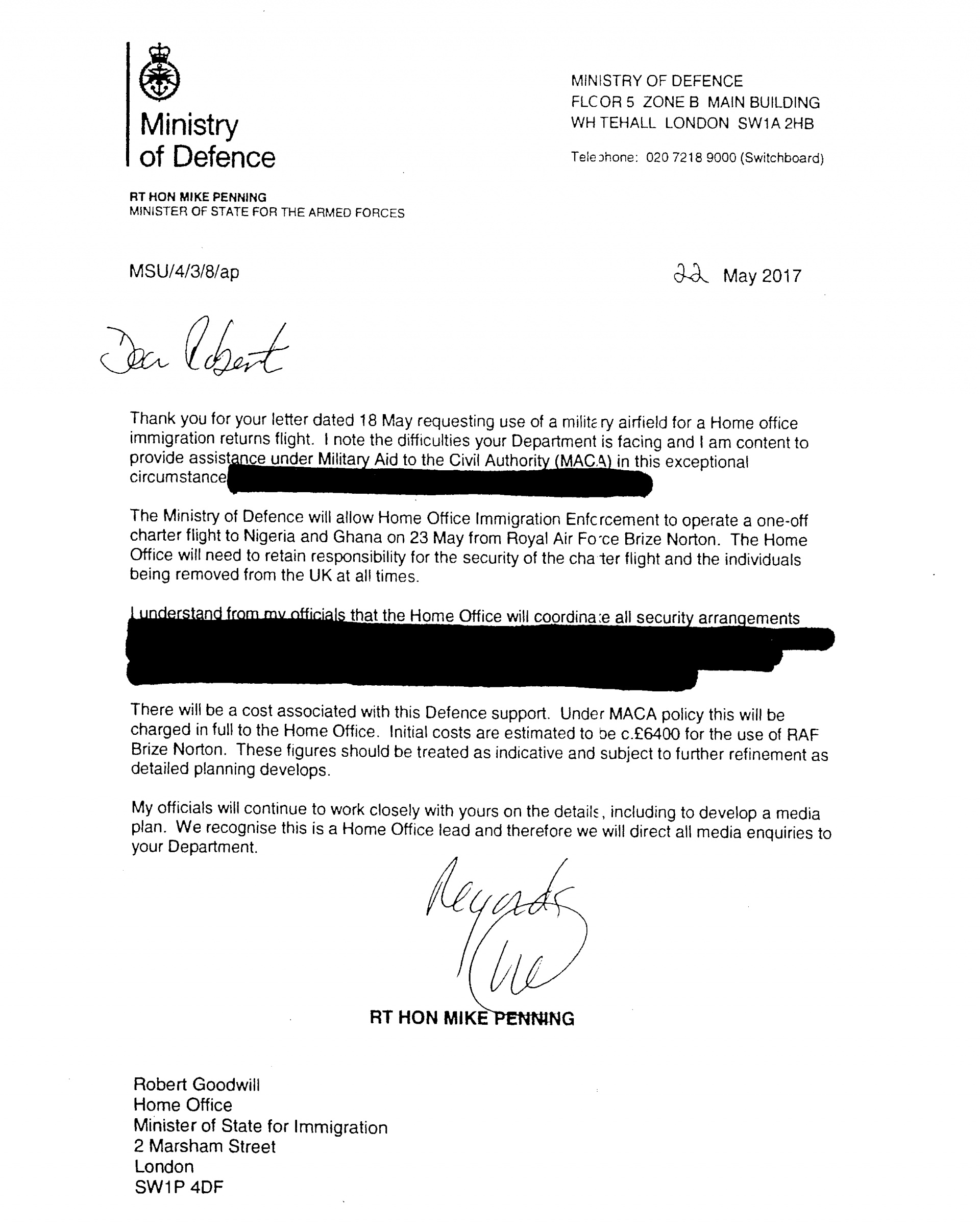 MACA is an emergency scheme normally reserved for natural disasters and civil unrest.

They were explicitly told that the RAF base had been “adopted following protesters gaining entry to the airfield at Stansted during one recent operation and attaching themselves to the aircraft.”

The MOD was worried about bad publicity, warning: “The issue of immigration enforcement is highly emotive and has been the subject of recent negative media attention of both the flights themselves and the protests that have accompanied them.”

RAF officers then issued their order to personnel at Brize Norton designating “enemy forces” as “any individual, group or organisation that attempts to deliberately delay and/or disrupt the mission.”

Although the Home Office had said “armed assistance is not required,” the RAF plan involved the Military Provost Guard Service controlling access to the airbase. 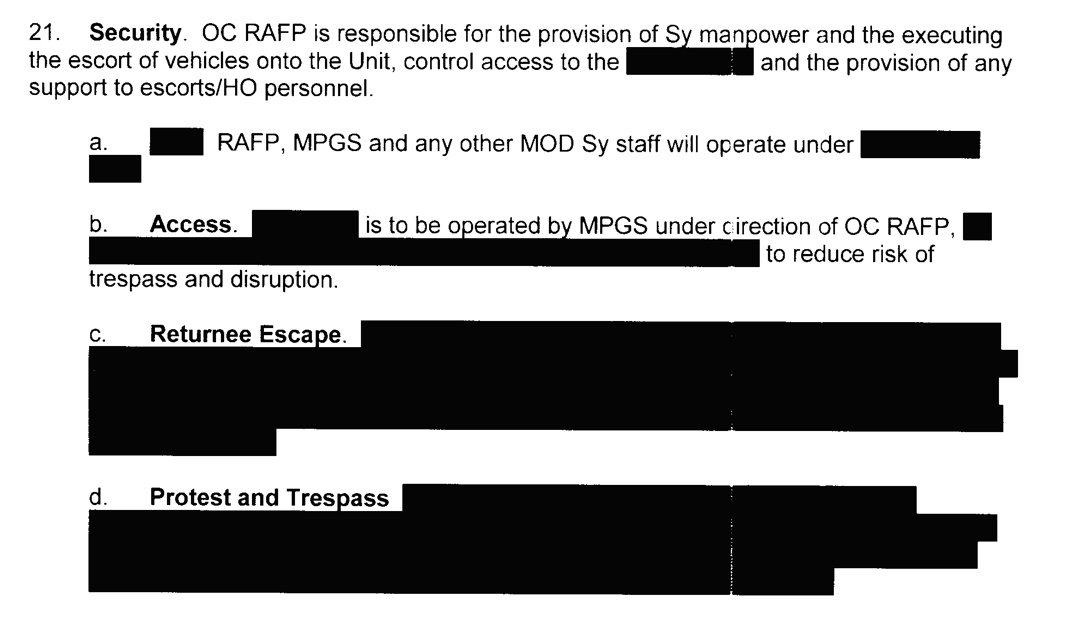 This is a British army unit tasked with preventing terrorist attacks on military bases.

For this operation the armed guards were needed to “reduce risk of trespass and disruption” — a clear reference to potential protests.

Parts of the briefing headed “Protest and Trespass” as well as “Returnee Escape” are censored, meaning their rules of engagement remain secret.

The Ministry of Defence said full disclosure could “adversely affect the security and operations at RAF Brize Norton” and “prejudice the operation of immigration controls”.

Reacting to our investigation, shadow home secretary Diane Abbott told the Morning Star: “This seems like a dangerous escalation of judicial and other sanctions against lawful protesters.

“They are not ‘enemy forces.’ We have already seen others being charged with terrorism offences, which is completely outlandish.”

The frontbencher said a Labour government would review laws “to better guarantee the right to peaceful dissent,” and warned that the Windrush scandal showed many deportations “are just wrong” because “our own citizens have been deported illegally.”

Thirty-one men and five women were deported from Brize Norton in May 2017. Over 100 others had their tickets cancelled at the last minute because of ongoing immigration claims.

The use of Brize Norton was only meant to be a “one-off,” but it ended up being used five times for deportations to west Africa that year.

Minnie Rahman, from the Joint Council for the Welfare of Immigrants, said the RAF’s plans were “astounding” and a “crackdown on peaceful protest.”

She said: “It is unacceptable to have military involvement in immigration enforcement.”

Sean Lyons from End Deportations said this was “another escalation in the hostile environment by regarding potential peaceful protesters as ‘enemy forces’.”

It showed the government was “desperate” to keep these deportations hidden, he said.

Although the Home Office no longer uses the RAF base for deportations, Ms Rudd’s successor Sajid Javid has called in the Royal Navy to intercept refugee boats in the Dover Strait.

The MoD told the Morning Star that the armed forces respect the right to peace protest. A spokesperson added: “Terms such as ‘friendly and enemy forces’ are standard language used in all forms of military documentation. These terms do not prejudge how any groups will be dealt with.”

Let this be the start, says Man City’s Gareth Taylor

Behind the headlines – what can we learn from the EHRC report into Labour anti-semitism?