PEOPLE stuck inside a refugee camp on the Greek island of Lesbos are facing a deluge of water and mud.

Heavy rainfall at the weekend caused some of the tents and roads inside the Kara Tepe refugee camp to overflow with water, leaving those stuck inside to eke out their existence in ankle-deep waters and sludge. 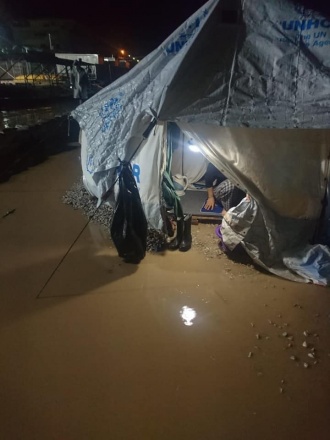 After the overcrowded Moria refugee camp on Lesbos burnt down in September, forcing thousands of refugees to live on the streets, the Kara Tepe camp was hastily constructed right beside the sea on an old military firing range.

Kara Tepe is often referred to as Moria or Moria 2 by refugees, activists and NGOs living and working in the camp.

One of the camp’s detainees posting photographs and video footage from inside the camp anonymously on social media on Sunday said: “I haven’t washed my body for over a month, I’m afraid of being sick and nobody cares, I asked when I could go to the washroom, and she said: ‘I don’t know.’ I’m so tired of this shitty life.”

Grassroots media project the Dunya Collective shared a photograph taken inside the camp on Saturday of an old mortar shell found by refugees when digging a drainage channel from their tent.

“This is why the government doesn’t want pictures from inside the camp. This place is neither humane nor safe. The police [have been] informed.” 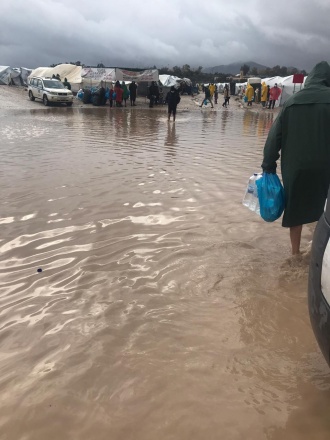 Aegean Boat Report, which monitors refugee arrivals into Greece from Turkey as well as pushbacks by the country’s coastguards, shared images from inside the camp on Sunday showing the refugees’ drenched tents and belongings.

“It’s unbelievable that Europe can let this happen on European soil in 2020. Over 7,000 people are living in this camp, many of them children, in inhumane conditions.”

One refugee, Aziz, told the human rights monitoring NGO Mare Liberum how people cannot sleep because of the wind blowing into the camp.

“Sometimes I think the tent is getting out of the ground and it’s so cold that we use two or three blankets at night but [we’re] still cold,” he said.

“It’s not a place even for animals to live in winter.”

The Iuventa 10 — former members of the NGO rescue ship Iuventa facing possible charges by the Italian state for saving thousands of refugees in the central Mediterranean — said that the situation in Kara Tepe/Moria 2 should not be considered a humanitarian crisis, but a deliberate consequence of EU migration policy.

“European politicians have consciously decided that the people in Moria 2 hardly receive any medical care, that they do not get enough food, that there has been no running water or electricity in the camp for months,” the Iuventa 10 group said at the weekend.

“European politicians decided that. Humanitarian crises [make it] sound like [no-one is] responsible! But there are. Racist misanthropists, despising life.”

Climate change: PM urged to ‘clean up his act at home’ before telling other nations what to do

Hope for the Rams yet, administrators tell fans