LABOUR leader Sir Keir Starmer was slammed by socialists  today after he sacked Rebecca Long Bailey for sharing an article online that included a mention of Israeli training of US police.

The now ex-shadow education secretary had tweeted a link to the interview with actor Maxine Peake on the Independent website, adding: “Maxine Peake is an absolute diamond.”

Ms Long-Bailey tried to defend herself in face of criticism from the Board of Deputies of British Jews, which called into question her “suitability for the role” of shadow education secretary because of a line in the interview.

But she later said that Mr Starmer had already made the decision to sack her, for what his spokesman said was sharing an article that “contained an anti-semitic conspiracy theory.”

The Socialist Campaign Group of Labour MPs requested a meeting with Mr Starmer about the sacking, but the request was reportedly declined.

In an online press briefing held immediately after the sacking, Jeremy Corbyn’s successor said his decision was made in the interests of rebuilding trust with the Jewish community.

Mr Starmer also repeatedly refused to clarify whether he thought Ms Long Bailey was anti-semitic herself.

During the wide-ranging Independent interview, Ms Peake had said that the kneeling on the neck of George Floyd in the US is a tactic “learnt from seminars with Israeli secret services.”

The Independent added in brackets: “A spokesperson for the Israeli police has denied this, stating that ‘there is no tactic or protocol that calls to put pressure on the neck or airway’.”

But Israeli security forces have been photographed many times kneeling on the necks of unarmed Palestinians.

It was reported by the Morning Star earlier this month that officers in Minnesota, where Mr Floyd was killed, had attended training by Israeli law enforcement officers at the Israeli consulate in Chicago.

It has also been reported by Amnesty International USA that Israeli forces have trained US police.

International Solidarity Movement co-founder Neta Golan told the Morning Star that she had been subjected to the kneeling-on-neck tactic multiple times during non-violent protests in the West Bank.

“It’s a fact that Israeli security forces regularly train police in the US, Brazil, and around the world. And the expertise they are exporting is treating civilian populations as potential terrorists.

"They don’t deny that they train police in other countries using tactics used on Palestinians, and it’s incredible that they get away with accusing anyone who criticises Israeli policies and actions as anti-semitic. This is a bullying tactic used to silence criticism.”

Palestinian activist Ashraf AbuRahmah (pictured) told the Morning Star he had been subjected to this tactic many times, including three years ago when protesting in the West Bank village of Burin against settler attacks. 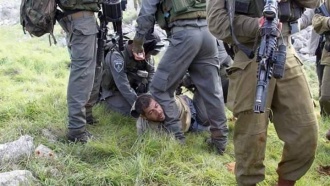 He told the Star: “When I saw what happened to George Floyd in the US, I thought this was the same thing that happened to me. I was sad and angry but this is daily life in Palestine and no-one speaks about it.”

A spokesperson from the socialist group Jewish Voice for Labour told the Star that the sacking “takes guilt by association to the nth degree” and that there was “nothing anti-semitic in the interview with Maxine or in Long Bailey’s tweet.”

They added: “The shadow education secretary, who was the left’s champion earlier this year, has been unjustly thrown to the wolves.

“She has fallen foul of the Board of Deputies’ draconian 10 pledges which she signed, alongside Starmer, while standing against him for the party leader’s position.

“All talk of party unity seems to have been thrown to the wind.”

David Rosenberg of the Jewish Socialists’ Group said that her sacking was based on a “very flimsy pretext.”

“US cops’ tactic on Floyd goes back to the ’60s, but today they get training by Israelis, among others,” he noted.

He added that she and Mr Starmer clashed over pupils’ return to schools during the coronavirus pandemic.

Former shadow chancellor John McDonnell expressed his solidarity with Ms Long Bailey, adding: “Throughout discussion of anti-semitism it’s always been said criticism of practices of Israeli state is not anti-semitic.”

Former shadow justice secretary Richard Burgon and Labour for a Green New Deal were also among those expressing solidarity with her.