Westminster shut down as tens of thousands protest against Trump

TENS of thousands of protesters shut down Westminster today to show their opposition to US President Donald Trump’s state visit. 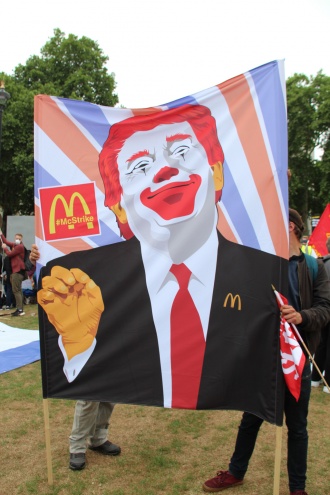 Demonstrators gathered in Trafalgar Square in central London before marching to Whitehall, near 10 Downing Street, where Mr Trump was meeting Prime Minister Theresa May.

Speaking in Whitehall, Labour Party leader Jeremy Corbyn, who refused to attend a state banquet for Mr Trump yesterday, said he hoped there could be a conversation with the visitors from the US.

But the US president said he had refused to meet Mr Corbyn and dismissed reports of the demonstrations as “fake news.” He instead claimed that thousands of people had “cheered” as he was driven past them.

Mr Corbyn said: “I am not, absolutely not, refusing to meet anybody. I want to be able to have that dialogue to bring about the better and more peaceful world that we all want to live in.”

He told the crowd, who greeted him with deafening applause and chants of “Oh, Jeremy Corbyn,” that he was disappointed with Mr Trump’s Twitter attack on London Mayor Sadiq Khan yesterday.

“I am proud that our city has a Muslim mayor, that we can chase down Islamophobia, anti-semitism, any form of racism within our society, because racism divides,” the Labour leader said.

“We are in the midst of a debate about our relationship with Europe and the rest of the world.

“It should be a debate on how to protect jobs and rights, not on how we will go about with a no-deal Brexit as well as offering up our health service to American companies to take over.”

Mr Corbyn also addressed Mr Trump’s views on immigration, war and the environment and said he wanted to work with every government across the planet to create a peaceful world.

Stop the War Coalition convener Lindsey German said British ministers should have denounced Mr Trump for calling Mr Khan “nasty,” among other things, instead of having lunch with him to discuss the threat of further war.

“This [protest] isn’t just about the US government but also our own,” she said. “We have the most discredited government in history.”

Ms German called for a “return to equality and justice” through a general election. 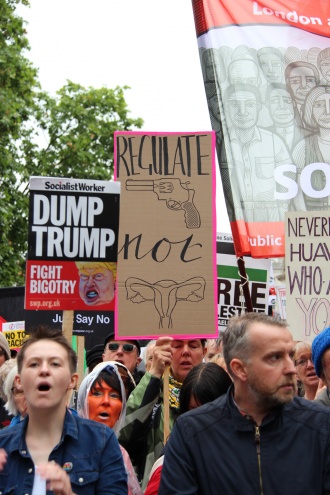 Also speaking at the rally, TUC general secretary Francis O’Grady sent her greetings to the US trade unions and working class.

She said: “We love the American people — we just can’t stand their president.”

Ms O’Grady also sent solidarity to the victims of the latest mass shooting in Virginia, telling Mr Trump to “go home” and “sort out gun control.”

“The real reason he is here is because he wants a slice of the NHS,” she said. “The NHS is not for sale.”

Communications Workers Union general secretary Dave Ward could not attend the demonstration due to the birth of his grandson, but he sent a message that his union stands against Mr Trump, Tory leadership frontrunner Boris Johnson, Brexit Party supremo Nigel Farage “and all of their ilk.”

He vowed: “We will not allow the far right to be normalised in the UK.

“For too long we have been offered two sides of the same coin. Jeremy Corbyn’s Labour Party offers a chance for us to choose hope over hate.”

Protesters then marched to Parliament Square, where a small group of Trump supporters were already gathered, holding Israeli flags and chanting: “USA, USA” and “Trump is great.”

A man with a “Make America Great Again” hat said he was thinking about jumping into the middle of the main protest to start an argument and “get one of them nicked.”

One pro-Trump demonstrator had to be escorted away from Parliament Square by police after being hit by a thrown milkshake.

Reopened schools will not mean a return to normal for children

Burundi thanksgiving held for election result despite allegations of fraud