The Times launches yet another desperate smear against Corbyn

THE TIMES newspaper has launched another desperate anti-semitism smear against Jeremy Corbyn, this time for writing a foreword to a book by an influential historian who has also been cited by Tony Blair and Gordon Brown.

The latest smear attempt appears to contradict previous smears in which Mr Corbyn has been accused of not reading enough books.

If Hobson's "Imperialism" is an anti-semitic tract, it means every university course in politics and international relations has been promoting hatred of jews. https://t.co/Z9AMBDN2ja pic.twitter.com/XWS1Pi00YN

The Times has now realised that Mr Corbyn has not only read a book, but he has also written a foreword to one.

The book in question is called Imperialism: A Study and was authored by JA Hobson in 1902.

Mr Corbyn wrote a foreword in 2011 for a new edition of the book.

Eight years after the book went on sale in bookshops across Britain, Mr Corbyn’s foreword was “uncovered” by the Times journalist and Tory peer Lord Finkelstein.

The Times published its scoop a day before this week’s local elections, revealing:

“Jeremy Corbyn wrote the foreword to a book which argued that banks and the press were controlled by Jews.

“… In his foreword Mr Corbyn said the work was a ‘great tome’, praising Hobson’s ‘brilliant, and very controversial at the time’ analysis of the ‘pressures’ behind western, and in particular British, imperialism at the turn of the 20th century.” 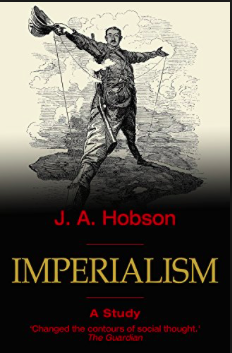 The book’s front cover carries a Guardian review which said Hobson had “changed the contours of social thought.”

Hobson was also cited in 2005 by Gordon Brown who said in a Chatham House speech:

“This idea of liberty as empowerment is not a new idea, JA Hobson asked, ‘is a man free who has not equal opportunity with his fellows of such access to all material and moral means of personal development and work as shall contribute to his own welfare and that of his society?’”

Tony Blair also described Hobson as “probably the most famous Liberal convert to what was then literally ‘new Labour’.”

Mr Blair made the comments in a pamphlet for the Fabians.

“Jeremy’s not unlike other politicians who have quoted Hobson in particular speeches or written pieces about them.

“Jeremy in no way supports or sanctions the words that were used in relation to anti-semitism.”

Glyn Secker, secretary of Jewish Voice for Labour, told the Morning Star: “Daniel Finkelstein, in his scurrilous piece for the Times, ingeniously cobbles together quotes from two different books by Hobson.

“If you read Finkelstein's piece carefully you will see that all the most anti-semitic passages come from an earlier book published in 1900 not from the later book to which Jeremy Corbyn wrote a foreword.

“In his Imperialism Hobson does in one passage make a dodgy reference to the Jewish element in international finance and to the Rothschilds as did many others at that time.

“But he also referred to JP Morgan and Cecil Rhodes — neither of them Jewish — as examples of financiers backing imperialism.

“The central argument of Hobson's imperialism is not anti-semitic and is widely acknowledged as a key text in the history of the analysis of imperialism.”