The worst assault on our right to protest in recent history, Commons hears

THE Tories’ new policing Bill is the biggest assault on our right to protest in recent history, the Commons heard today, as shameless Tory MPs ignored calls to drop the legislation.

Criticism of plans to hand police additional powers has intensified after the Met’s storming of the Clapham Common vigil for Sarah Everard, the 33-year-old woman who was allegedly kidnapped and murdered by one of the force’s serving officers.

During the Commons debate, Labour MP Bell Ribeiro-Addy said the Bill is “designed to infringe on our civil liberties.”

“This Bill doesn’t even attempt to address the crisis of plummeting conviction rates for some of the most serious crimes including rape,” she said.

Labour MPs were told to vote against it, but Ms Ribeiro-Addy’s reasoned amendment to throw out the legislation was rejected by the Speaker ahead of the debate.

Signed by over 40 cross-party MPs including the Green Party’s Caroline Lucas, who in the Commons branded the Bill “dangerous, undemocratic and disproportionate,” and Labour’s Nadia Whittome and Diane Abbott, it sought to halt the new law on the basis that it fails to “address the racial bias and discrimination that persists in policing.”

“The Bill therefore risks exacerbating the racial and gendered disparities in the criminal justice system by increasing police powers and sentencing whilst reducing accountability,” it read.

The legislation, dubbed the Police Crackdown Bill, will boost police powers against so-called static protests, including by giving the ability to impose start and finish times and “maximum noise limits.”

It also seeks to prevent protests outside Parliament, expand powers to shut down demonstrations and introduce new offences for protesters, even if they have simply caused “serious annoyance.”

“We might risk causing annoyance every day, but it’s only in dictatorships or repressive regimes that such actions are subject to drastic sentencing,” he warned.

Ms Whittome said the expansion of powers in the Bill was at a level “that should not be seen in any modern democracy.”

“This marks a descent into authoritarianism and we’re debating this today because the Home Secretary despises Extinction Rebellion and Black Lives Matter, having described them as hooligans, thugs and criminals.

“Make no mistake, this is the biggest assault on our right and freedom to protest in recent history.”

Labour’s Clive Efford branded it “a Tory-led coup without guns” and even DUP MP Gavin Robinson added that the “loose and lazy way” the Bill is drafted would “make a dictator blush.”

Home Secretary Priti Patel defended the Bill, saying that Labour was voting against “crucial measures” to support victims of violent crime such as the scrapping of automatic halfway release for those convicted of serious sex offences. 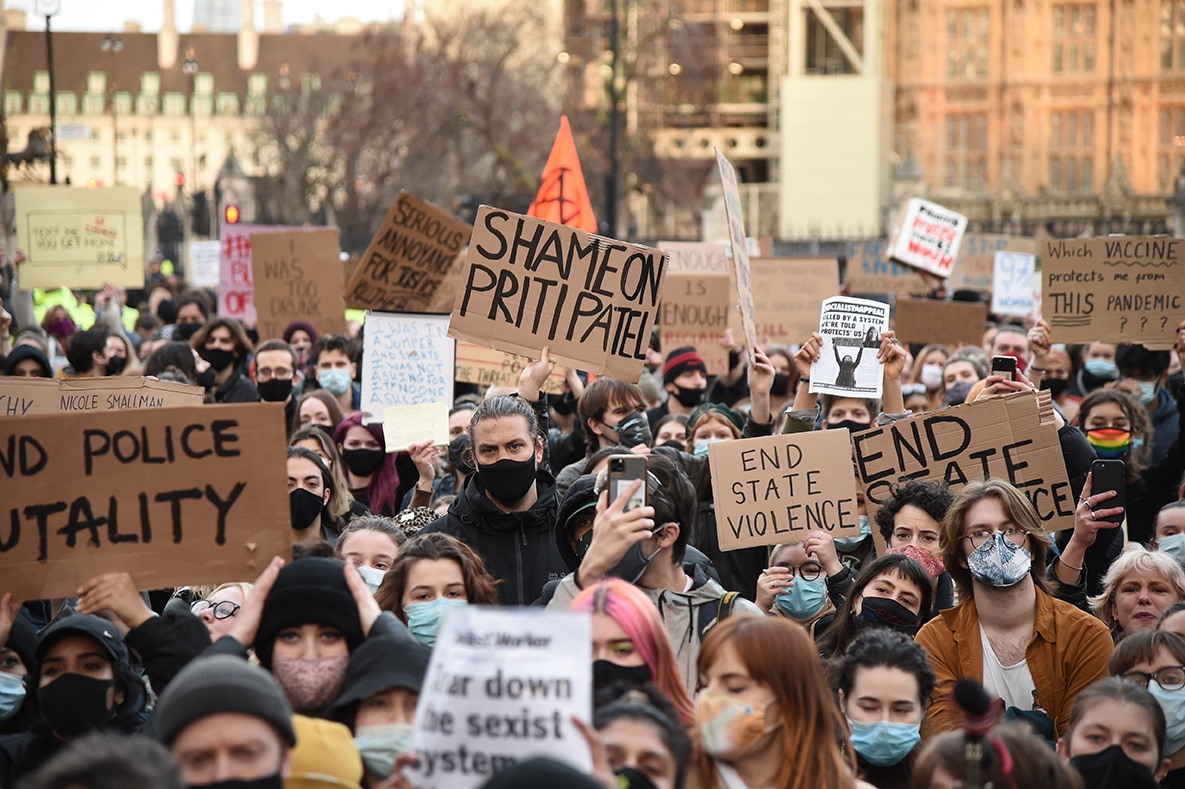 Demonstrators during a protest in Parliament Square, central London, in memory of Sarah Everard

THE Tories are facing a furious backlash over new laws cracking down on protest, with thousands of people defying Covid-19 restrictions to oppose the Bill outside Parliament in recent days.

At almost 300 pages long, the Police, Crime, Sentencing & Courts Bill is a mammoth piece of legislation covering unrelated changes to law ranging from life sentences for child killers to banning sex between sports coaches and 16-year-olds.

While some of the proposals are considered positive, others have been described as an attack on our fundamental rights. Here are some of the reasons why:

• Police powers will be expanded to shut down protests, including if they cause bystanders ‘serious unease’

• Criminal penalties will be created for protesters who cause ‘serious annoyance’

• Protest around Parliament will be prevented

• Officers will be allowed to stop and search more people if plans for serious violence reduction orders go ahead. These will allow police to use the tactic against known knife offenders without reason or suspicion

Criminalisation of Traveller and Gypsy communities

• The Bill will introduce a new offence of ‘residing on land without consent in or with a vehicle,’ effectively criminalising trespass