THE Trump administration’s threat to sabotage Jeremy Corbyn has been slammed by activists who said it was “frightening” and displayed a “pernicious contempt for democracy.”

US Secretary of State Mike Pompeo has made sinister remarks in a private conversation that was leaked to the Washington Post.

He was asked by a Jewish group in New York how he would respond to a Corbyn election victory and if he would be “willing to work with us to take on actions if life becomes very difficult for Jews in the UK?”

Mr Pompeo said in response: “It could be that Mr Corbyn manages to run the gauntlet and get elected. It’s possible.

“You should know, we won’t wait for him to do those things to begin to push back. We will do our level best.

“It’s too risky and too important and too hard once it’s already happened.”

However Labour national executive committee member Lara McNeill issued a withering response, telling the Morning Star: “Mike Pompeo is an arrogant clown who needs to wind his neck in.

“His comments are an unwanted intervention against British democracy, and stand in a long tradition of American imperial arrogance towards mass movements of working people.

“This provocation will only renew our determination to build an international movement that will elect a socialist government in Britain and bring down Trump’s squalid gang of oligarchs.”

Her concerns were shared by Stop The War which said it was a “frightening development.”

Vice-chairman Chris Nineham told the Morning Star: “The US Secretary of State is using his power to prevent Jeremy Corbyn becoming prime minister.

“It is shocking that it’s not headline news in Britain at a time when the elites claim to be concerned about foreign interference in politics.

“I think it’s a warning of international action against the possibility of a Corbyn government that needs to be taken very seriously, and it’s a sign of the toxic reality of what is lovingly called the special relationship between the US and Britain.”

“The powerful fear real change and they know that’s what Corbyn stands for in Britain, Europe and the world,” he told the Morning Star. “We can defeat inequality and the far right and shift the balance of forces back in favour of working-class people. We stand with Jeremy Corbyn in this fight.”

John Rees from the People’s Assembly also spoke out, saying “It all adds up to a pernicious contempt for democracy.”

He commented: “Coming hard on the heels of Esther McVey’s threat to prorogue Parliament, we now have the Tory allies in the Trump administration threatening to prevent Jeremy Corbyn becoming prime minister.

“But the real threat to democracy is that the Tory Party is threatening to foist an unelected prime minister on the country, hell-bent on more tax cuts and austerity.”

The Labour Party said Mr Pompeo’s attempts to decide who will be Britain’s next PM “are an entirely unacceptable interference in the UK’s democracy.”

A spokesperson said: “The next Labour government poses no threat of any kind whatsoever to Jewish people.

“The security and wellbeing of Jewish people is a priority for our party and in government we will always ensure schools, synagogues and institutions are properly protected.”

Mr Pompeo’s claim to be a custodian of American Jews is also at odds with the Trump administration’s links to white supremacist groups, a relationship which has seen a disturbing rise in attacks on synagogues.

The Anti-Defamation League has said that anti-semitic attacks in the US remained at near-record levels in 2018.

There were almost 2,000 incidents last year, the third highest level since the 1970s.

In one horrific attack, a white supremacist killed 11 people at the Tree of Life Synagogue in Pittsburgh last October.

Glyn Secker, from Jewish Voice for Labour, told the Morning Star: “We have long argued that the conflation of swathes of anti-semitic posts originating from the far right, both here and in the US, with the proportionately small number of anti-semitic posts from within the Labour Party is a politically motivated action by the right and the mainstream media to destroy Corbyn’s credibility.

“Recently it has become evident that this is part of an international campaign.

“Liberal Jewish commentators in the States have criticised Republicans launching false allegations of anti-semitism against Democrats in key states, and recently Le Monde carried an article describing how the same tactics are being used against the French left.

“Now we have evidence on Pompeo’s words that the Trump administration intends to be proactive against Corbyn to prevent his democratic election to office by the British people.

“From the land of the free clearly some abrogate to themselves the authority to dictate to others who shall and who shall not have freedom.”

The US State Department told the Morning Star: “The United States is a strong partner of the United Kingdom, and we look forward to continuing that partnership with Prime Minister May through the duration of her term, as well as with her successor, whoever it may be.

“The UK is a robust democracy, and we look forward to co-operating with the new government when it is established.” 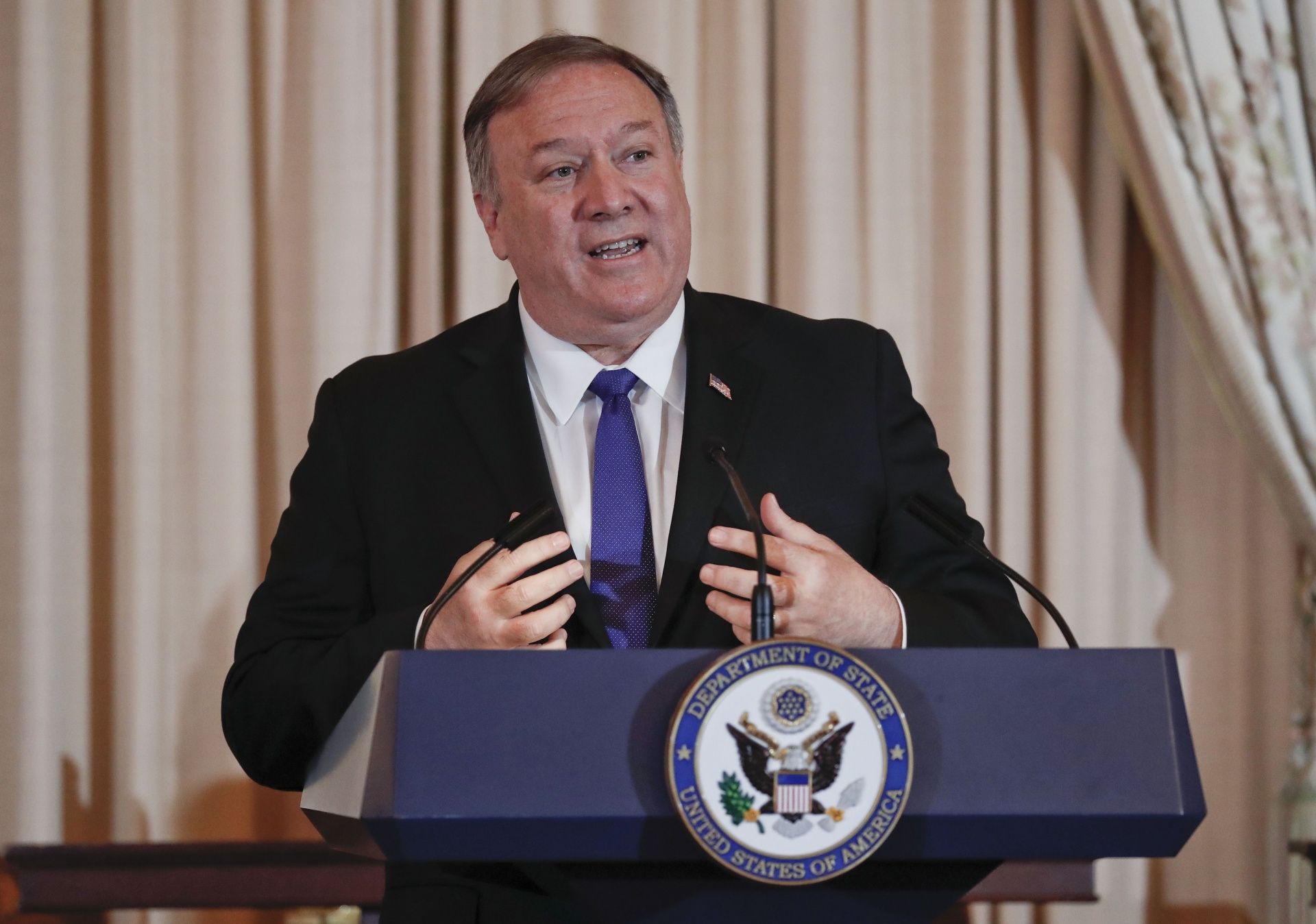 US secretary of state and former CIA director Mike Pompeo

US threats to undermine democracies around the world are nothing new.

His department also bankrolls the so-called National Endowment for Democracy (NED), a regime change vehicle that received $186 million (about £147m) in 2017, according to its latest annual report.

The NED’s directors include hawks such as Elliot Abrams, the US special envoy on Venezuela with a record of links to death squads in Central America.

The NED was set up in the 1980s as the White House tried to develop a more palatable regime change arm to the CIA, which was coming under intense scrutiny for its work in Nicaragua.

As well as subverting successive progressive movements in Latin America, the CIA has also sabotaged elections in Europe, most notably to stop communist election victories in Italy in 1948 and Russia in 1996.

It enjoys close ties with British spies and their London station chief is said to attend Whitehall’s weekly joint intelligence committee meetings, where the heads of MI6, MI5 and GCHQ come together.

The latest US threat follows on from repeated moves against Mr Corbyn by Britain’s spy chiefs and military high command.

Sir Richard Dearlove, the former head of MI6 when Britain invaded Iraq, recently said he was “troubled” by Mr Corbyn.

And a serving British army general has claimed troops could stage a mutiny if Mr Corbyn became PM.

Despite the mounting concerns over foreign and deep-state threats against Mr Corbyn, Britain’s Electoral Commission told the Morning Star it did not regulate what people said, especially outside an election period, and could only investigate financial impropriety.