Six for the Tolpuddle Martyrs: The Epic Struggle for Justice and Freedom
by Alan Gallop
(Pen and Sword, £14.99)

ANYONE familiar with the song Red Fly the Banners, O! will understand the reference in the title of this book to six agricultural labourers from Dorset who’ve become a lasting symbol for the freedom to join a trade union. 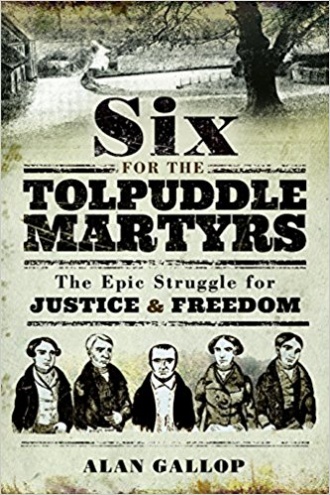 Every July thousands flock to Tolpuddle in Dorset to commemorate their lengthy struggle and eventual success against the forces of the establishment — Parliament, the judiciary, the church and the landowners.

Life for farm labourers was grim in the early 19th century. In William Cobbett’s Rural Rides he described the food and dwellings of farmworkers in the south-west as not fit for pigs and the wretchedness of life worse than that of “free negroes” in the US.

Increased mechanisation in the form of threshing machines caused unemployment and the fall in wages made it almost impossible to survive without begging or applying for parish relief.

A spate of machine-wrecking and burning of hay ricks had swept across the land, led by the mythical figure of Captain Swing. Arriving in Dorset in 1830, it filled the landowners with alarm.

Alan Gallop's book presents a detailed account of rural life in the 1830s to give a meaningful context to the story of the Tolpuddle labourers.

George Loveless, master ploughman and Methodist lay preacher, had no known involvement in the Swing riots but realised that to gain a living wage men must organise in a union.

The meetings he called were infiltrated by landowners’ spies and, although unions had been legalised, he and five others were charged with swearing illegal oaths under the 1797 Mutiny Act.

A show trial sentenced them to seven years’ transportation to work in slave conditions in the Antipodes while their destitute families at home were denied poor relief.

James Frampton, the Lord High Sherriff of Dorset, remarked: “No person is entitled to receive parish relief who could afford a penny a week to support the union.”

Loveless’s comment on the judge and jury was apt: “Self-interest alone would induce them to say guilty.”

A tidal wave of protest swept the country, with demonstrations of up to 200,000 people, petitions to Parliament with 800,000 signatures, newspaper articles and radical MPs making speeches in the Commons. The end result was a free pardon and the repatriation of the martyrs.

Although this history may be familiar, it is worthy of re-examination, not least for its relevance to today’s campaigns for trade union rights around the world.

Alan Gallop is adept not only in telling the absorbing story of the martyrs but also in threading through it the twists and turns of their persecutors. This is partly due to his extensive research into primary sources which he quotes to good effect and his use of the speeches and writings of the six, particularly Loveless, fleshes them out into real people with principles, honour and determination rather than simply figureheads.

For the six Tolpuddle labourers, the working class and the radical movement, this was indeed an epic struggle for justice and freedom.