Interview ‘Artists are their nightmare because we bring consciousness’

Brazilian singer LUCAS SANTTANA'S latest record is a call for resistance to the Bolsonaro dictatorship, he tells Chris Searle

“WHO wants to speak out? Raise your hand!/’Who wants to take a stand? Time to rise up!” is the message from Brazilian singer Lucas Santtana that resonates well beyond his country.

It’s a line from his new album O Ceu e Velho ha Muito Tempo (The Sky’s Been Old for a Long Time) and, he tells me, the struggle against the Bolsonaro government in his country is “the struggle for life.” 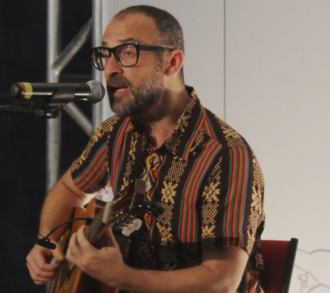 Fascist governments are “cultures of death,” he says. “Bolsonaro permits weapons of death, poisonous pesticides, burning in Amazonas, cops with licences to kill. With his government everything ends in death.

“We fight this government because we prefer life and artists are their nightmare because we bring consciousness and freedom of thought.”

That consciousness began at an early age. Born in Salvador, Bahia, and brought up in a musical family, his dancer mother bought him the records that made him decide to be a musician.

“I listened to music in the streets of Salvador. There is music all the time, like in New Orleans. Eighty per cent  of the population is black and there is much influence from African and Jamaican music,” he says.

For him, jailed ex-president Lula’s tenure has had a profound impact on artists in his country.

“He was interested in ending hunger and taking 30 million people out of poverty. He was the only president who did this for the poorest. All the artists and musicians loved him for it.”

Even in the period of “fascist governments like we have now” music will survive because it “has a very solid and creative foundation. It is impossible to destroy.”

He loves the songs of Chilean Victor Jara and you can hear his echoes on The Sky’s Been Old for a Long Time. Its title reflects his view that: “We live a short period on earth, so we often suffer by thinking things are immutable.

“The sky is watching millions of years of history and knows that things are cyclical. Times may seem frightening and definitive now but it will pass, it will change — it is a positive message.”

In his song Patriotic Brazil he tells his motherland that “DNA resists in your nature,” despite the “clubs that strike hard in dark caves” and Bolsonaro’s disastrous attacks on the natural world.

“He’s crazy — he has no mental capacity,” Santtana declares. “Culture in the West has made us believe that nature is separate from civilisation. This is wrong. We are part of nature, it is within us — all living organisms are composed of the same biological principles. We’re just one of them.

“We have developed a way of life as if we were another kind of being. My songs talk about a revenge of nature. If we continue to treat the planet like this there will be many more natural disasters and nature will be left without us.”

Time to take a stand with Santtana.