THIS slim booklet is a transcription of a 1967 lecture given two years before his death by Theodor W Adorno at the University of Vienna, addressing the then rise of the right-wing National Party of Germany (NPD). 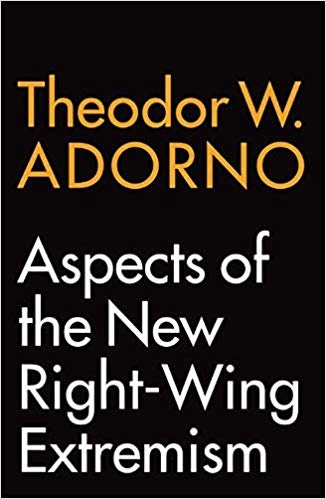 Adorno, who fled Germany for exile in the US before returning home after the second world war, is one of the most renowned representatives of the Frankfurt School of Critical Theory.

What he said in his lecture still has relevance today with a resurgence of the far right in Europe and elsewhere. He argues that right-wing ideas were never really eradicated in Germany and that when socioeconomic circumstances reach a critical point, such ideas can resurface and find willing adherents.

Right-wing demagogues play on people’s fears, whether about jobs or rapid cultural and technological change and use the concept of nationalism and of mythical past glories to incite disaffection.

Adorno notes how symbols like national flags or commemorative dates become rallying points, with the right wing’s use of lies and their constant repetition often key to its success, examples being the danger of the nation being swamped by foreigners or supranational bodies like the EU decried as a dictatorial and alien.

Such rhetoric finds fertile ground among the struggling lower-middle class — small shopkeepers and businesses threatened by the big monopolies and foreign competition — but also among disaffected sections of the working classes who feel their livelihoods threatened.

But Adorno also also stresses the differences now from the 1930s. Although capitalism is in crisis, it has not reached breaking point and so, in most countries, it does not yet feel the need of full-blown fascist regimes.

This, of course, could change rapidly if the socioeconomic situation worsens and Adorno stresses what Brecht put so succinctly: the womb which gave birth to fascism remains fertile.