THIS latest collection by Jan Woolf is like a Swiss Army penknife. Each is of different length and intention but all gleam with an incisiveness that will impress even the most casual reader. 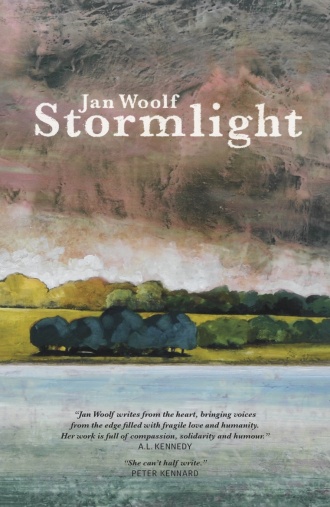 There are arguably two themes which unite this compact literary tool. The first is the presence of the political and the profound lying just underneath the surface of seemingly mundane human encounters which Woolf digs away at.

The other has the writer forensically carving out the shape of close relationships, vertically between the age groups and horizontally within the same generational span.

One of the most effective combines both. The opening paragraphs of The Baton meander inconsequentially enough as a daughter pushes her wheelchair-bound mother through the streets of Sidmouth.

Yet our sympathies shift quickly as the seemingly curmudgeonly older woman is revealed as a hardened veteran of numerous anti-nuclear campaigns.

Forced to relocate from Faslane by her daughter, she bemoans the inter-generational decline in political commitment: “I was rattling the fence at Greenham Common while you were just writing about it,” she declares.

In Polls Apart, in which a mother and daughter are attending their first counselling session, Woolf reprises this somewhat pessimistic view. The consultation is dominated by their opposing views on the country’s vote to leave the European Union.

The mother articulates an evidenced and class-based Lexit position, while the younger woman more naively and emotionally castigates her decision, repeating bourgeois liberal tropes about the intelligence and motivations of the white working class.

She cannot, yet, see beyond this windy rhetoric and her rage compromises the counsellor in the process.

A gentler, and one-way, communication between the generations is revealed in letter form in Dear Harry, which  records the redacted thoughts of an anxious but politically astute mother as she writes to her son somewhere on the Western Front.

The censor has left in the everyday comments but removed those that criticise the conflict and its origins.

But, somewhere along the line, the mother’s warnings must have registered as the story ends with a footnote explaining that the recipient is Harry Patch. In describing war as “organised mass murder,” he famously snubbed Tony Blair,

In picking away at horizontal relationships, Woolf delivers pathos in Cultural Studies, where a young woman reflects on the end of her affair with a frankly insufferable postmodernist while Icarus is a comic narrative of a back marker on a ramble fantasising about a fellow walker and Voice Over bursts with humour and tension as two London Underground employees worry over the wording of a tannoy announcement as a prelude to sex.

One of the most powerful stories is also the shortest. Navaswan describes the encounter between an aged and dying yogi and brash Indian modernity in the form of man who wants to develop his cave. In the end, both achieve what they want.

Full credit to Jan Woolf for these uncompromising, moving and witty stories.