An anarchic but never chaotic trip through troubling times

THIS 10th compendium of essays and reviews, cleverly curated by poet Jim Burns, uses texts, art, music and film as springboards for discussion of different periods of cultural upheaval, reflecting change which has benefited writers and artists but at other times threatened their lives and livelihoods. 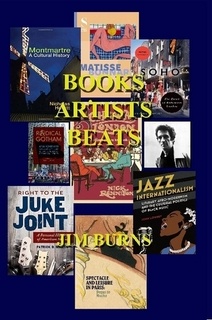 The majority of the essays and reviews focus on periods of great upheaval  in the 20th century, from times of fear to periods of cultural reawakening. They highlight acts of bravery from those who’ve stood up against forces beyond their control, as well as others who have struggled to get their work and voices heard.

Burns’s speciality is bringing back to life such neglected, marginalised and suppressed writers, artists, poets, filmmakers and publications, an example being the original beat generation in the US. Usually Ginsberg, Burroughs and Kerouac spring to mind but where are the women?

To his credit, Burns dismantles that beat generation boys’ club to expose what it was like for women writers of the period.

As well as focusing on those artists on the periphery, he also examines the political art of the Weimar Republic, particularly women artists such as Jeanne Mammen, who managed to combine illustration with social comment in her work Glimpse into the Future. Despite the feel of frivolity, nobody in it is smiling. It was produced in 1933, a fateful year.

In Austria, artist Richard Oelze painted the ominous The Expectation (1936), showing a crowd gazing upwards at a dark sky. He managed to survive the Third Reich, while others went into exile. But many others, such as Frieldi Dicker-Brandeis and Felix Nassbaum, who painted Self-portrait in the Camp (1940), died in Auschwitz.

A less deadly but still damaging suppression occurred in the US with the rabid anti-communist blacklisting of artists and writers between 1945 and 1960. Burns pays particular interest to the show trial of 1947, with a fascinating discussion on why the decision was made to target Hollywood, the 10 who went to prison and the glacial impact it then had on free speech.

As a book that bears telling witness to such people and times, this comes highly recommended.