AT FIRST glance, Ken Fuller’s Love and Labour, weighing in at almost 600 pages, seems too much. 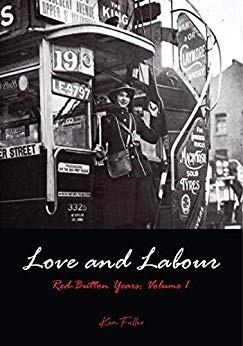 The worried reader, possibly intimidated by its length, might also be concerned that the primary source material is none other than the author’s own magisterial non-fiction study Radical Aristocrats: London Busworkers from the 1880s to the 1980s.

Yet while that source certainly underpins the novel, Fuller is too mature and experienced a writer to recourse to slabs of context interspersed with two-dimensional characterisation and diluted narrative.

In fact, this is a compelling and instructive novel which, although covering the years leading up to and during the first world war, contains both encouragement and warnings for present-day anti-capitalists and trade unionists.

It begins tightly focused at a very personal level as Mickey Rice travels up from Reading for an interview at London General, the major public transportation company in the capital. Sitting in a third-class compartment he strikes up a conversation with a radical young woman, whom we later realise is travelling under a pseudonym to work at the same firm.

Fuller quickly expands the focus to take in the activities of the “red button” union, the London and Provincial Union of Licensed Vehicle Workers, and eventually the wider fissures in society, including those over the role of trade unions, the campaigns to accord women the vote and the issue of conscription.

He recounts compellingly the key debates around all of these defining issues while allowing his principal characters the chance to breathe, reflect and grow in reaction to them.

Dorothy Bridgeman, that young woman on the train, is already a convinced and convincing activist for the British Socialist Party, the major predecessor of the Communist Party but Fuller doesn’t accord her ready-made powers of correct praxis. She certainly makes personal and tactical errors in the struggles in which she is involved.

Yet she plays a catalytic role in the life of Mickey as he develops into an impressive, educated and brave class warrior within the Leninist mould.

In the intimate relations between the two, Fuller writes some of the best sex scenes in recent British leftist fiction and also elegantly imagines conversations between his principals and real existing individuals on both sides of the class battles, including socialist union organiser activist George Sanders, Sylvia Pankhurst, Henry Hyndman, Theo Rothstein and Herbert Asquith.

Fuller treats the ruling-class opposition and their lackeys not as agitprop archetypes but, through the likes of bus manager James Shilling and owner Albert Stanley, as more complicated, subtle and occasionally endearing actors.

This is volume one of Love and Labour and one hopes that Fuller is well advanced with the publication of its sequel —  one volume of this quality is simply not enough.

Love and Labour is available in ebook and paperback versions online.