FOR those engaged in the class struggle today for women’s emancipation, equal pay and the ending of discrimination in the workplace, for abortion rights and lives free of violence, accounts of brave women who joined the fight before us must never be forgotten. 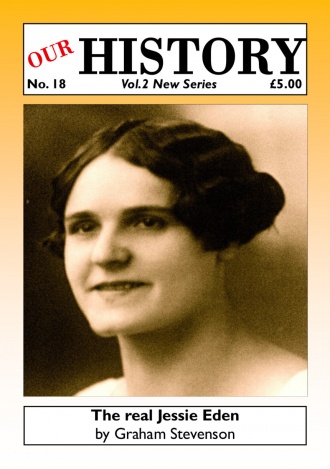 Their political stories resonate with our struggles now and with our own family histories.

Jessie Eden is one such inspirational figure. Graham Stevenson’s last publication in the Our History series before his recent untimely death charts Eden’s life and work, and the authenticity of this pamphlet is derived from his direct knowledge of the family in Birmingham in the 1970s.

He begins by pointing out substantial shortcomings in Eden’s characterisation in the recent BBC drama series Peaky Blinders, set in Birmingham in 1919. Stevenson tells Eden’s real story and redresses the balance.

Although a positive feature of the TV series is revelations about working-class life in the city, seldom explored by television, its dramatic essence is the doings of a criminal family rather than about the emerging organised working class, men and women, giving support to the new Soviet Union, developing trade unionism and workplace militancy, and the struggle for votes for women.

Eden was a trade-union leader, fighter for workplace rights and a community activist. She was 24 and a T&GWU shop steward at Joseph Lucas’s motor components factory when working-class action came to a head in the General Strike of 1926.

Hers was the only women’s section that was unionised, and she marched them out when the men in the AEU brought tool-making to a standstill.

Leading thousands of women in successful strike action in 1931 against attempts by the factory owners to bring in points-based productivity measures intended to lower the cost of labour laid the basis for mass unionisation of female workers in light industry and helped widen Communist Party influence in the industrial plants of the West Midlands.

In 1939, the Tory council in Birmingham proposed raising the rents in its municipal housing by 260 per cent, and Eden was immediately involved in organising the successful rent strikes that followed.

Eden’s legacy is one of hope and struggle. Her leadership of those early successful industrial actions for women set the stage for the growth of women’s trade-union membership, showing the leading role that they can play in workplace activism and the political importance of women joining and participating in the life and work of the Communist Party — as paramount now as then.

Revealing Eden’s militancy and class consciousness, it’s a pamphlet with important background information, illustrations, references and source material. As such, it is a lasting tribute both to Eden and to Stevenson.

Published by CPB History Group and available for £5 from CPB shop, shop.communistparty.org.uk. Carol Stavris is the Communist Party of Britain’s women’s organiser.