CULTURE A classic, in every sense of the word

A People’s History of Classics
by Edith Hall and Henry Stead
(Routledge, £29.99)

IF POTENTIAL readers of this splendid book are daunted by its subtitle — Class and Greco-Roman Antiquities in Britain and Ireland 1689 to 1939 —  they would sadly be missing out not only on a mine of information but also a riveting and entertaining read. 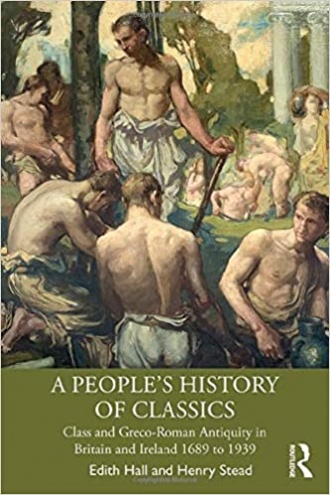 With 66 pages of references, this is the first detailed study of the use and influence of the ancient Greek and Latin languages and mythic histories on the British working classes from the 18th century onwards and its authors Edith Hall and Henry Stead have avoided a style that might alienate readers other than professional academics.

“Class” and “classic” are words derived from the same Latin root and the authors note that their modern usage, significantly the term “working class,” first gained currency around the time of the French Revolution.

This was a period when the developing bourgeois society’s wealthy merchants sought to have their sons acquire “the patina of gentlemanliness” provided by an Oxbridge classical education.

Command of these subjects might be of little use in practical terms — as our present political elite demonstrate — but it broadcast the holders’ class status, quarantining them from the workers who provided their privileged lifestyle.

For the “plebeian hordes,” as one museum owner described his self-educating, lower-class visitors, the free-admission museums were just one of a number of ways in which those deprived of formal education, largely illiterate, met classical civilisation.

By 1889, the 50,000 workers in Staffordshire’s potteries would have been very familiar with the stories of ancient mythical and historical figures depicted on the hugely popular, classically themed ceramics they produced, and Josiah Wedgwood even provided libraries for his workforce to understand and contribute to the “renascence of the lost art of classical pottery.”

This is a book embellished by a rich tapestry of the social, political and the hitherto hidden intellectual working-class life of the 18th and 19th centuries.

The thirst for education was served by a growing variety of movements, including Dissenting —  especially Methodist — schools, Mechanics Institutes and Working Men’s Colleges, leading in later years to university extension courses and the Workers' Educational Association. Many of these, unusually, included classical studies.

Particularly interesting in the book are the mini-biographies of a surprising number of male autodidacts — very rarely are they women —  who were able to teach themselves Greek and Latin.

Joseph Wright, born in 1885, at five years of age worked as a donkey driver from 7am to 5pm daily. He taught himself to read and ended up teaching Greek and Latin grammar at Oxford University, while Richard Robert Jones, the Welsh linguist from an impoverished background, taught himself Latin, Greek and Hebrew, was completely fluent in French and Italian and was reputed to have understood Biblical Aramaic, Arabic and Persian.

Theatrical performance, from the fairground drolls with the reputedly spectacular 1608 The Siege of Troy, to Joan Littlewood and Ewan MacColl’s 1938 production of Aristophanes’s Lysistrata — a forerunner in technique and spirit of Littlewood’s Theatre Workshop production of Oh, What a Lovely War! — has throughout used the classics, often subversively, for popular entertainment.

The book is full of fascinating gems of information about people and events.

Of the 33 warships of Nelson’s Trafalgar fleet, 16 had classical names, while among the entertainers providing “a narrative of eroticised female beauty in which proletarian sexual voyeurism was legitimised and lent an illusion of decorum by classical mythology” was Amy Lyon, daughter of a Cheshire blacksmith, who became Nelson’s Lady Hamilton, popularising her scantily-clad tableaux vivants.

This wide-ranging study throws light on working-class classics such as Robert Tressell’s The Ragged Trousered Philanthropists’ debt to Plato and the remarkable and largely neglected prose-poem In Parenthesis by David Jones, a “Herculean, craftsmanlike attempt to use words to evoke authentically the sustained extremes of trench warfare as experienced by its lowest-ranking combatants.”

There is an important chapter devoted to socialist and communist scholars of the first half of the 20th century — largely airbrushed from popular history — with special recognition of Christopher Caudwell and Jack Lindsay.

The authors recognise that the neglect of Lindsay in mainstream cultural history “offers one of the most spectacular examples of the absence of people’s Classics from our histories of the discipline.”

We have certainly moved on from the days when a 19th-century London street ballad could claim: “Tradesmen common English scorn to speak…/For everything’s in Latin now, but what’s in Greek.”