A FASCINATING tour of London’s East End working-class history, this small volume is more than a mere biography of Minnie Lansbury. 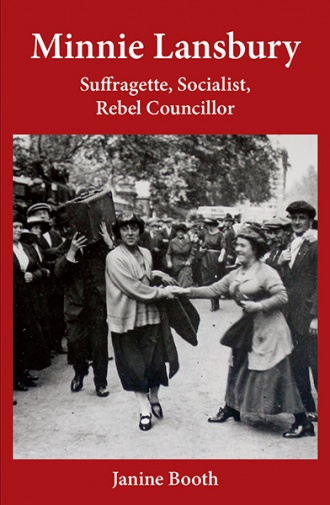 Highlighting the role of immigrants, militant labour movement struggles and battles for women’s rights, its relevance  to our own times is astonishing.

Lansbury, born in 1889 into a secular Jewish family from eastern Europe, was a bright student at school, winning scholarships and then training to become a teacher. Through her activism in local struggles she met Edgar, son of the Labour Party’s future leader George Lansbury, and the two married in 1914.

She became a significant figure in the labour and communist movements of the time and, while there are few written records of her life, Booth has done superb research in digging out almost everything discoverable and fitting the small mosaic pieces together into a coherent and highly readable narrative.

Lansbury became an alderman on Poplar local council at the age of only 30 in 1919 and  was instrumental in helping to improve services on all fronts, from children’s health to housing and women’s rights.

In 1921, the council was faced with a funding crisis due to the financial crash. Then, as now, central government starved poorer boroughs of funds due to the unfair rating and financing system and Lansbury and her fellow Labour councillors challenged this and went to prison for their principles — a stand directly relevant to struggles today. The council was renowned for its militancy and was often dubbed the Poplar Soviet.

The following year, she became a founder member of the Communist Party and remained one until the day she died. But she stayed in the Labour Party because at that time there was no bar on communists being members.

She campaigned vigorously for women’s suffrage and, alongside Sylvia Pankhurst, helped establish the East London Federation of Suffragettes and its militant paper, the Dreadnought.

The organisation split away from Emmeline and Christabel Pankhurst’s Women’s Social and Political Union, which seemed more concerned about fighting for the right to vote for propertied middle-class women than allying the movement with the aspirations of their working-class counterparts.

Lansbury and her husband vehemently opposed the war in 1914 and campaigned for increased support for women during the slaughter, setting up the League of Rights for Soldiers’ and Sailors’ Wives and Relatives.

Then, as now, the Jewish Chronicle and the religious Jewish establishment were exceedingly conservative and vehemently attacked Jewish socialist organisations, opposed further Jewish immigration from eastern Europe and were gung-ho on the war.

In 1915, Lansbury left teaching to become assistant honorary secretary, alongside Sylvia Pankhurst, of the East London Federation of Suffragettes, which soon morphed into the Workers’ Suffrage Federation.

She and her husband welcomed the Bolshevik Revolution in 1917 and he was a delegate to the huge conference in Leeds in 1917 in support of it, at which a decision was taken to set up British workers’ and soldiers’ councils.

When the Spanish flu epidemic swept the country at the end of the war, she became one of its victims. She was already physically weakened by the six weeks she had spent in jail and succumbed in January 1922 at the age of only 32.

Janine Booth and Five Leaves are to be congratulated on producing another important working-class biography of someone who deserves to be better remembered and celebrated.