A graphic reminder of a US labour movement pioneer inspires

FOR anyone bored with people on the left in this country banging on about Trump rather than enthusing about the growing socialist movement in the US, this book will be welcome. It’s not just about a significant leader of the country’s radical movement but a reminder of its rich radical history. 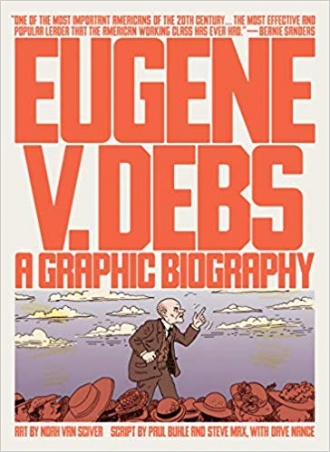 Eugene V Debs, like many radicals in the US, was from a French background and this graphic biography celebrates the role that immigrants played in the socialist movement.

During his lifetime he went to prison twice, for leading a railway strike in solidarity with workers manufacturing luxury Pullman train cars in Illinois in 1894 and in 1918, when he opposed US involvement in the first world war.

The US during the late 19th century was a rapidly industrialising society. Its workers were often immigrants, which made labour organisation difficult, although it also led to many of them becoming part of a socialist movement with Debs as their leader.

He offered them a hope for a fairer society that chimed with their own socialist ideas brought with them from Europe.

In 1894, Debs founded the American Railway Union, one of the first unions to organise unskilled workers. The following year, he was leading the Social Democracy movement and ran for president in 1900 on the Social Democratic Party of America ticket. He ran for the highest office five times, the last time from prison in 1920 when he won nearly a million votes for the Socialist Party.

His appeal was his humane view of society. Debs supported female suffrage and defended prostitutes against police abuse and public condemnation. He co-founded the Industrial Workers of the World, which attracted workers at the bottom of the economic pile, including new immigrants and African-American labourers.

Today socialism is once again attracting supporters in the US – the Democratic Socialists of America has now 50,000 members and the rise of Bernie Sanders has shown a growing interest in socialist ideas.

This new biography is an important reminder not just of his life but of a radical socialist history whose descendants, many of them young, are playing a role in the US today.