FOLLOWING the warmly received publication of Ann Quin’s previously uncollected shorter prose, And Other Stories continue their “Quinaissance” with their reissue of her marvellous 1964 debut Berg. 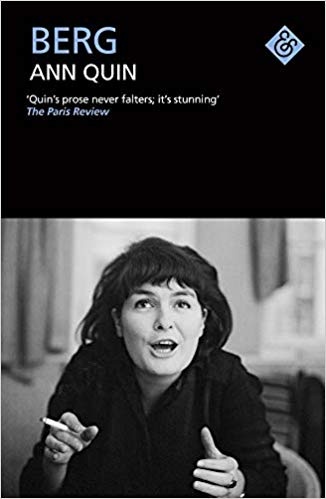 It’s a gritty yet deliciously strange masterpiece of British fiction in which a man called Berg, who’s changed his name to Greb, comes to a seaside town intending to kill his father and thus begins the quest of a hair restoration product salesman to wreak vengeance on his absent parent.

Refracted through Berg’s capacious and immersive interior monologue, ranging from tersely observed seedy details to more filigreed existential musings, Quin’s supple prose propels the narrative along, seducing the reader into accepting the more bizarre facets of her narrative as he becomes sexually entangled with his father’s mistress and the plot climaxes with the mutilation of a ventriloquist’s dummy.

Alongside the works of her contemporaries BS Johnson and Alexander Trocchi, Quin’s oeuvre represents an unusual path for British writing.

Its more experimental sensibility is more in tune with the mid-20th-century European avant-garde which is slowly being recovered.

As well as seeking to break the prevailing formal modes of realism Berg, like Trocchi with his Cain’s Book, breaks the mould of the stultifyingly conformist culture of post-war Britain, lashing out against its conservative moral norms by brazenly depicting deviant behaviour and desires, from sexual promiscuity to murder.

Reading Berg today, it’s striking how Quin’s work is adjacent to much contemporary writing elsewhere that has only relatively recently come into English translation.

Her variegated sentences that daintily skip from the quotidian to the profound are akin to Brazilian author Clarice Lispector, as if a late modernist baroque style were flourishing independently across the world.

There was much gnashing of teeth about “difficulty” in fiction in the press after Milkman’s Booker Prize win a few months ago. But the success of other linguistically challenging novels like Eimear McBride’s A Girl is a Half Formed Thing shows there is a popular thirst for formally offbeat fiction.

After being criminally overlooked for so many years, hopefully Quin will now find the audience she has always deserved.