George Orwell’s Homage to Catalonia is, for many, the defining account of the Spanish Civil War. Although it took up the ideological perspective of just one of the many different factions that participated in that war, and although Orwell’s personal experience of the action was limited to a short stint on a quiet front, Homage to Catalonia has been reissued dozens of times and is on school and university curricula throughout the Western world. 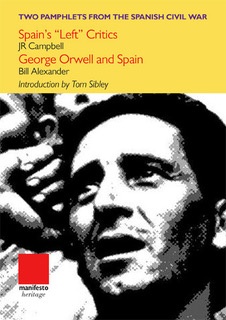 Orwell’s perspective made its way even further into the popular consciousness as a result of socialist film-maker Ken Loach’s 1995 film Land and Freedom, which unfortunately is based largely on Orwell’s narrative.

The POUM had argued that the Popular Front government established in 1936, against which General Francisco Franco’s fascist uprising was directed, couldn’t be trusted to pursue the fight against Franco, because it was too afraid of unleashing the forces of socialist revolution.

In Orwell’s words, the Republican government was “manifestly more afraid of the revolution than of the fascists.”

For Orwell, all the problems and failures of the Republican armies in the Civil War were due to the vacillating nature of the Popular Front and its major supporter on the global stage: the Soviet Union.

Given Orwell’s production of the two most prominent anti-communist novels of the 20th century — Animal Farm and 1984 — and his later snitching on communists to the British state, it’s perhaps not surprising that he took positions on the Spanish Civil War that were fundamentally hostile to the Soviet Union and the Spanish Communist Party.

For this British aristocrat — Old Etonian and former colonial policeman in Burma — the Republican government just wasn’t radical enough, because it was attempting to hold together a fragile alliance of class forces against fascism.

Given the number of people that denounced the progressive governments of Salvador Allende in Chile (1970-73) or Luiz Inacio “Lula” da Silva Brazil (2003-16) from the left — in many cases contributing to their weakening — Orwell’s critique of the Republic is eerily familiar to modern ears.

The two pamphlets published in this small volume from Manifesto Heritage offer another side to the story.

JR Campbell’s Spain’s Left Critics was originally published in 1937, just a year into the war, and deals with the POUM’s criticisms as they were being issued. Arguing against the accusation that the Popular Front was the Spanish equivalent of Kerensky’s provisional government in Russia, Campbell defends the Spanish government’s record: “It released the 30,000 working-class political prisoners. It restored autonomy to the Catalan people. It restored the rights of the unions and enabled the workers to win improved conditions all round. It legalised the seizure of the land by 87,000 peasants. It broke up the fascist leagues. In the critical moment of the fascist insurrection it armed the workers.”

The Kerensky comparison betrays a fundamental misunderstanding of the class forces involved. Kerensky’s provisional government was, in Campbell’s words, “a bourgeois government carrying on an imperialist war.”

The Spanish Popular Front, on the hand, was under attack from precisely the armed representatives of the capitalist and landowning classes. Equating the two was indeed “the purest nonsense.”

Bill Alexander’s pamphlet takes issue with Orwell’s characterisation of the Spanish people as being “good at many things but not at making war.” He points out that millions of ordinary Spaniards, with the help of the International Brigades, “despite most of the regular army going over to Franco, deprived of weapons, held back not only the Spanish fascists but large military units of German and Italian forces for 32 months. Far longer than the French and Belgian forces did in 1940!”

Alexander explains that despite the claims of a few disparate ultra-left fantasists, the circumstances didn’t exist in 1930s Spain for a socialist revolution. As elsewhere, the clear priority was to build the broadest possible alliance against fascism, recognising that fascism represents the most violent, repressive, dangerous and reactionary form of capitalism. “Orwell’s views of the possibility of a revolution in Spain in 1936 and 1937 were naive in the extreme.”
The reissuing of these two pamphlets provides a valuable contribution to the study of the Spanish Civil War. Paul Preston, a distinguished historian of the war, describes Homage to Catalonia as a “moving but ultimately narrow vision… written with a pro-POUM stance which has been taken, erroneously, as an overview of the war, which it is not.”

Preston’s book A Concise History of the Spanish Civil War is a good starting point for those looking to explore this topic.