Book Review How and why the most vulnerable are under attack

Crippled is a harrowing account of how austerity has impacted on millions of disabled people, says CARLOS MARTINEZ

Crippled: Austerity and the Demonisation of Disabled People
by Frances Ryan
(Verso, £12.99)

IN GIVING a voice to millions of disabled people, Frances Ryan’s Crippled is urgent and essential reading. 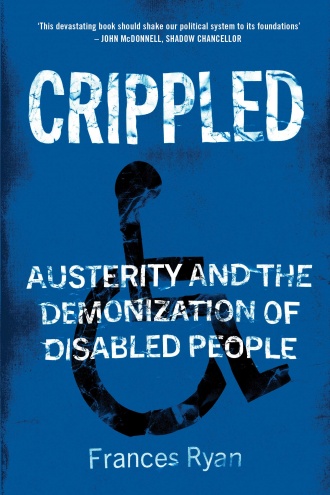 It provides comprehensive statistical evidence demonstrating that disabled people have been disastrously and disproportionately affected by the last decade of public spending cuts, combined with interviews and case studies showing just how badly our society is failing.

They include people who have seen their benefits and support cut to such an extent that they are routinely having to choose between eating and heating or forced to sleep in their wheelchairs because they no longer qualify for a carer to help them get to bed.

Others are resorting to online crowdfunding to raise money for wheelchairs and nutritional supplements or are driven into outright destitution and stripped of the right to live in their own homes.

Austerity has brought about a historic step backwards for the disabled. Benefits for them, from the the late 1940s as part of the postwar Labour government’s commitment to a welfare state, was accompanied by a cultural shift towards appreciating that disabled people were full human beings with rights and something to offer society, as opposed to defective nuisances to be hidden and ignored.

Increasingly, disabled people had the right to support, education and work and to live free from discrimination. There was a growing awareness of the need to make buildings, services and technology accessible to all.

Much of this progress has been reversed as a direct result of the austerity programme introduced in 2010. The British state is now manifestly failing in its duties towards the disabled in terms of housing, employment, education, healthcare and care provision.

This is no small problem — there are an estimated 12 million people in Britain living with disabilities, visible and invisible, with at least four million living below the breadline. The UN has described this situation as a “human catastrophe.”

One of the most grievous measures has been the 2012 introduction of the so-called bedroom tax, whereby public housing tenants with rooms deemed to be “spare” received reduced housing benefit. This overwhelmingly impacts on the disabled because almost half of the people that have had their benefit reduced have a disability.

As Ryan comments, “these are box rooms lined with adult nappies and oxygen cylinders. Many of the ‘spare rooms’ that disabled people had their benefits docked for were in fact being used to store vital medical equipment or for a carer to sleep in.”

Benefits sanctions are another key cost-reduction mechanism that has disproportionally affected the disabled, who are routinely sanctioned for failing to attend meetings that they don’t have the means to attend. Ryan notes that between 2013 and 2014, sanctions against disabled and chronically ill people rose by 580 per cent, leading to immense privation. This situation is set to get much worse with the roll-out of universal credit.

There’s an appalling irony, Ryan says, that there are five times more officials paid to investigate benefits fraud than there are to investigate tax evasion, even though the latter costs the state over 20 times as much as the former.

Alongside the direct economic effects of austerity, a shame-and-blame culture is emerging, with the government and media talking incessantly about “benefits cheats” and the “work-shy long-term sick.”

This narrative reinforces the message that rising poverty and inequality aren’t caused by capitalist crisis or free market fundamentalism but by a bloated welfare bill. It’s no coincidence that the last few years have seen a marked increase in hate crimes against the disabled.

We must, urgently and immediately, move towards a system that affords disabled people their full human rights. With the appropriate support in place, disabled people can expect to lead dignified and fulfilling lives.

Labour has promised to reverse the cuts to disability support, end the punitive sanctions regime and to “transform our social security system from one that demonises disabled people to one that is supportive and enabling.”

We must fight to turn those promises into reality.

Policing Bill: picketing in the crosshairs

PM should resign over 'industrial-scale partying at No 10,' says Labour