Interview ‘I love the power of jazz to transcend all barriers’

HELENA KAY, one of a new generation of British jazz musicians, talks to Chris Searle about the influences and inspirations that have shaped her career

HELENA KAY is living proof of how far jazz has expanded and migrated from its New Orleans birthplace. 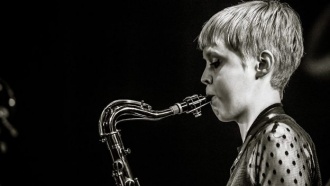 The young Scottish saxophonist, born in Perth in 1994, tells me that her love of jazz was founded on her yearly trips to the Shetland Islands, where her piano-playing grandfather lived. There she would join him on his renditions of the tunes of Teddy Wilson and Erroll Garner.

She recalls how Perth schools had a very strong and effective music provision – something now virtually lost to most English local education authorities along with a host of many other services – and how much it empowered her musical growth.

After playing piano, violin and alto saxophone, she turned to the tenor saxophone after hearing Sonny Rollins albums, such as The Bridge and Live at the Village Vanguard, and playing in the Fife Youth Jazz Orchestra. And she was inspired too by the great tradition of Scottish saxophonists and masters like Bobby Wellins, Joe Temperley and Tommy Smith.

After school, she went to study at the Guildhall School of Music and the way in which the London community of jazz musicians welcomed and integrated her – ignoring age, gender or origin made a big impression.

“I loved the power of jazz musicians to transcend all perceived barriers,” she tells me. “What counted to them was commitment, musicianship and friendship.”

But, she jokes, it wasn’t all the same with non-musicians. She remembers some of the assumptions — “Ah, then you must be the singer” — by a number of producers and managers when she told them she played jazz.

She found her sojourn in New York, meeting and being tutored by US saxophonists like Chris Cheek, Dayna Stephens and young Chilean virtuoso Melissa Aldana, invaluable.

I met her in the warm and congenial Sheffield jazz venue of the Lescar pub, where she was playing, alongside bassist Ferg Ireland and drummer David Ingamells, with the Kim Trio to promote their first album, the vibrant Moon Palace.

She plays a combination of her own tunes and those of the saxophone legends and from the opening notes of Strawberry Terrace, named after the London street where she used to live, it's the buoyancy of sound, its lightness and lyricism, which impresses.

Equally impressive are her versions of John Coltrane’s Big Nick and Charlie Parker’s Barbados, whose very familiar themes are transformed and reinvented by her unique floating timbre, while Ireland’s dancing, grounded bass lays down a springing rhythm and potently plucked solos.

She plays the ballad You’re My Everything with a beautiful and gentle restraint but it's during Feijao, her tribute to the Brazilian Antonio Carlos Jobim, that her characteristic timbre truly shines as she skips lightly through her notes with a sound that's almost levitating.

The creative emergence of a whole generation of young British women saxophone players over the last few years comes as no surprise to her.

“We’ve always been here, now at last, we’re being recognised,” she says. Alongside saxophonists like Tori Freestone, Rachel Musson, Camilla George, Cath Roberts and Trish Clowes and trumpeters like Yazz Ahmed, Emma-Jane Thackray and Laura Jurd, Helena’s power and artistry is a signpost as well as a precious musical achievement.