The Young’uns
The Ballad of Johnny Longstaff
Hull University

LIKE contemporaries The Unthanks and Cornshed Sisters, Teesside’s The Young’uns are evidence of a thriving song-based tradition in England’s north-east folk scene. 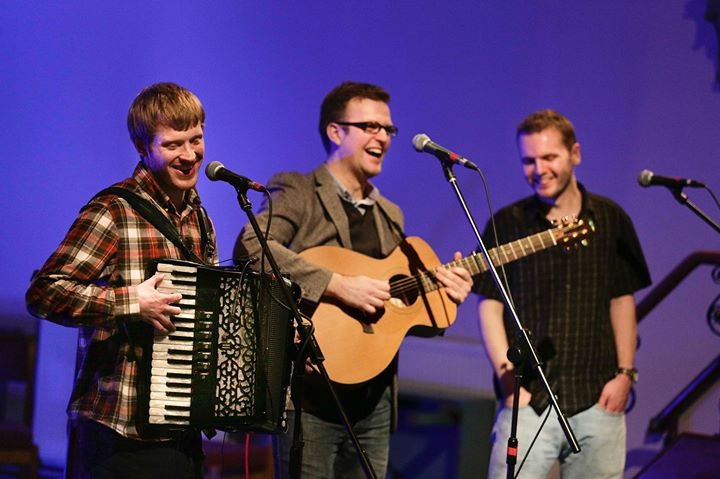 Lively and politically charged, the trio’s repertoire is a mix of outrage and deep-felt compassion, whether singing about the suicide of a young gay Muslim man or the historic Battle of Cable Street.

The Ballad of Johnny Longstaff grew out of one-such composition on 2017’s Strangers, inspired by the real-life experiences of its eponymous hero in that bloody confrontation with police and Moseley’s Blackshirts.

Longstaff is a fascinating figure. He was a veteran of the NUWM Hunger Marches, the mass trespasses which established the right to roam and the struggle against Franco’s fascists in Spain —all while still in his teens. His piss-and-vinegar determination to remain true to his heart and political conscience resonates today.

Sean Cooney, David Eagle and Michael Hughes, themselves teenagers when they began to sing unaccompanied in the pubs of their native Stockton-on-Tees, have fleshed out Longstaff’s story into a multi-media stage show.

In a bold move, they are joined on audio by the real Johnny Longstaff, recorded in 1986 for the Imperial War Museum. His candid recollections of life in the 1930s reveal an impish wit and rousing selflessness. Interleaving his words with songs and back projections, the resulting performance is one of remarkable depth and complexity.

The Young’uns sing with understated musical embellishment throughout, tempered with unexpected flashes of humour and tenderness.

Opening portrait of unimaginable poverty and neglect Any Bread? echoed later in the heart-breaking No Hay Pan, Carrying the Coffin and Hostel Strike chart Longstaff’s political awakening, while Cable Street catches it in the first bloom of youth. By the time of his encounter with the plain-speaking recruitment officer in Robson’s Song, he is an old hand.

The Young’uns mix naive earthiness on the ribald growl of Noddy with genuine pathos. They perform the gorgeous Ta-ra to Tooting in front of a faded photo of Longstaff and his mates giving the clenched fist salute of the Spanish republic. They are barely out of short trousers.

The show does not shy away from the horror and cruel privations of the war in Spain but its story is one of hope and faith in human goodness. The wider truth about the 35,000 men and women, who volunteered to fight fascism with the International Brigades is still to be fully told.

But for now, we have the Young’uns and the Ballad of Johnny Longstaff.

Touring until February 9, box office: theyounguns.co.uk. The Ballad of Johnny Longstaff (£15) is available from the same website.