Extract Making a killing from killing

Investigative journalist PHIL MILLER'S new book exposes the activities of Keenie Meenie Services, a powerful and secretive mercenary company which, from Sri Lanka to Nicaragua, has been involved in war crimes around the world.

BY NOW the Contras were virtually defeated by the Sandinistas, both militarily and politically. But the election results and reality on the ground meant nothing to the Sandinistas’ opponents in the White House, Langley and the Pentagon, who were determined to stop the spread of what they saw as communism in Central America – even if these communists were now democratically elected in a vote which British politicians regarded as free and fair. 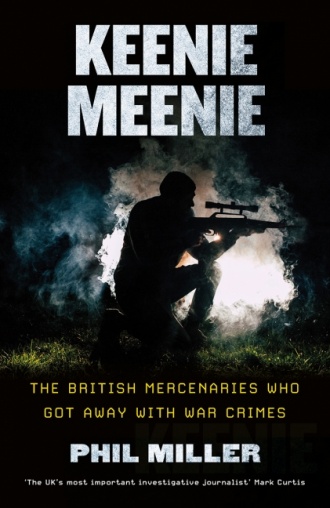 With a congressional ban on US funds for the Contras, the right-wing hawks had to formulate a more elaborate plan. The Contras would be supported through unofficial channels. Plausible deniability was key. A web of shell companies would be needed to administer the scheme without anyone being able to prove that the US government was involved. The proceeds of secret US arms sales to Iran, whose ayatollahs were America’s sworn enemies, would be diverted to bankroll the shell companies.

What would one day become known as the Iran–Contra scandal was now underway.

As part of this intricate plan, the CIA director William Casey spoke to Reagan’s navy secretary, John Lehman, a senior republican and former navy pilot. Lehman proceeded to ring an old friend from his days at university in Cambridge, England — a Mr David Walker.

Five days later, the KMS man was at the Pentagon, standing in Lehman’s office. At this point, Walker was still a serving Conservative councillor, although he was starting to tire of the role. He had attended 12 meetings that year but had missed a series of events since October, possibly because the Keenie Meenie company’s new contract in Sri Lanka was beginning to take off.

He had stepped down from the town planning committee and taken up a slightly less onerous position on the council’s environmental health panel. The highlight of the summer had been a “very enjoyable” cricket match between council staff and the councillors, followed by an “excellent buffet.”

Walker had scrutinised the safety of a pelican crossing on a local high street. Life as a local politician was becoming increasingly pedestrian. He could not resist the lure of his old life and his old friend was about to plunge him straight back in, deeper than ever before.

“This weekend, at the request of Secretary John Lehman, I met with David Walker, a former British SAS officer who now heads two companies (KMS and SALADIN) which provide professional security services to foreign governments,” US Marine Colonel Oliver North wrote in a top secret memo from early December 1984. North was at the centre of the White House’s secret war in Central America and David Walker would become his brother-in-arms.

Although KMS had built its reputation by providing bodyguards and training troops, the company’s work was about to shift towards a more direct role in fighting, bombing and eventually killing people, in highly questionable legal circumstances.

“In addition to the security services provided by KMS, this offshore (Jersey Islands) company also has professional military ‘trainers’ available,” North told Reagan’s national security adviser, another former US marine, Robert “Bud” McFarlane. “Walker suggested that he would be interested in establishing an arrangement with the FDN for certain special-operations expertise aimed particularly at destroying HIND helicopters. Walker quite accurately points out that the helicopters are more easily destroyed on the ground than in the air.”

The next two lines of the memo, titled “Assistance for the Nicaraguan Resistance,” are redacted but it is clear from the uncensored section that Walker envisaged sabotaging Nicaragua’s fearsome Soviet-made Mi-24 helicopter gunships, known in military circles as HIND.

Despite the possible geopolitical implications, the Sandinistas were more interested in the helicopters’ utility for domestic counterinsurgency purposes. Since the advent of manned flight, air power has become a decisive factor in almost all armed conflicts.

David Walker knew this only too well. He had helped win the Battle of Mirbat in Dhufar by using a helicopter to outflank the revolutionaries and pin them down in a killing zone. In Nicaragua, the tables were turned and David Walker found himself on the side of the rebels, who many regarded as little more than terrorists.

To make money from this conflict, Walker would have to show that he was equally capable of thinking like an insurgent in the mountains of Nicaragua as he was able to direct a counter-insurgency strategy in the Omani desert.

Immediately, he reached the same conclusion as many guerilla commanders had done before him. The best option was to destroy the helicopters before they took off, by penetrating deep behind enemy lines, infiltrating the airbase perimeter, sabotaging the helicopters and escaping as quickly as possible — a classic special forces mission, straight out of the SAS playbook.

Oliver North was clearly impressed by Walker’s grasp of covert military strategy and concluded his top-secret memo by informing President Reagan’s national security adviser: “Unless otherwise directed, Walker will be introduced to Calero [a Contra leader] and efforts will be made to defray the cost of Walker’s operations from other than Calero’s limited assets.” Adolfo Calero was a former Coca-Cola executive, who did not care where the money came from for his guerilla war.

Just weeks after Walker’s transatlantic trip, Margaret Thatcher was preparing to visit President Reagan in Washington. North excitedly sent the national security adviser another top-secret memo, trying to make the most of the forthcoming visit and shedding more light on what he had discussed with David Walker.

Not only had Walker “indicated a willingness to assist in special mission planning and training for the Nicaraguan resistance” but the Englishman had also told North that “BLOWPIPE surface-to-air missiles may be available in Chile for use by the FDN in dealing with the HIND helicopters.”

If the Contras could not sabotage the helicopters while they were on the ground, then the guerillas would be vulnerable to aerial bombardment. The only way to survive this type of assault was with shoulder-launched rockets. The best Britain’s military had at that time was the “Blowpipe” model, which was used in the Falklands War with dubious results. One brigadier compared it to “trying to shoot pheasants with a drainpipe.”

For the Contras, though, this technology was a glimmer of hope. North’s memo shows that as soon as Calero was tipped off about the nearest stockpile, the Contra leader “proceeded immediately to Chile.” There, he found that the Chilean army: “have possession of large quantities of BLOWPIPE missiles and that they are willing to make 48 missiles and five to eight launchers available to the FDN. There would be no charge for the missiles, but [redaction – looks like a Chilean official] did ask $15k each for the launchers.”

However, there was one snag. The Blowpipe missiles had been manufactured in the UK and sold to Chile with an end-user export licence. To sell on the missiles to a different user, the Chilean army had said it “would need British approval for such a transfer.” Colonel North felt that Thatcher’s pre-Christmas visit to Washington in two days’ time, December 22, “offered an opportunity to address the issue.”

This ambitious colonel recommended that “the president raise the issue privately with the prime minister.” Colonel North then went on to say that Thatcher had “available a non-reportable contingency fund,” a mysterious pot of money which presumably could help fund the Contras.

To expedite his scheme, the colonel drafted a memo for his superior, the White House’s National Security Adviser Robert McFarlane, to send to President Reagan, warning that it “may be the best opportunity we have to obtain such support for the resistance.”

Although McFarlane denies that he ever asked “the president to intercede with any person for the obtaining of Blowpipes for the Contras,” he attended a working lunch at Camp David between Thatcher and Reagan just after North’s memo, where Nicaragua was discussed at least in some capacity.

Downing Street papers from the meeting show that Reagan stressed the size of Nicaragua’s military and Thatcher took the bait, observing that “the Soviets now seemed to be sending additional ships with arms.” Reagan readily agreed, adding that “one of these ships had contained MIG [Soviet] aircraft.” He also said it was hard to detect the “precise cargoes these ships carry” because of gaps in their surveillance. Thatcher called the situation “very worrying.”

Despite this meeting, when questioned by reporters, the UK government would later deny that it gave permission for Chile to divert its stockpile of Blowpipe missiles to the Contras. And, indeed, the Contra leader Adolfo Calero disappointedly told Colonel North on January 3 1985: “Blowpipe deal is off.” However, there was still some cause for optimism. In a letter from February 1985, Colonel North wrote to Calero about the “best news of all,” saying that “a sum in excess of $20 million will be deposited in the usual account.”

He explained: “This new money will provide great flexibility we have not enjoyed to date. I would urge you to make use of some of it for my British friend and his services for special operations,” in what appears to be an oblique reference to David Walker, who he pledged to produce at the end of February.

The source of this extra $20 million is unclear but the information was so politically sensitive that Colonel North instructed the Contra leader to “destroy this letter after reading. ... Please do not in any way make anyone aware of the deposit.”

He continued to emphasise the need for utmost secrecy. “Too much is becoming known by too many people,” North lamented. “We need to make sure that this new financing does not become known.”

The reason for this discretion was highly political: “The Congress must believe that there continues to be an urgent need for funding,” North explained, before signing off using his codename: “Warm regards, Steelhammer.”

Keenie Meenie: The British Mercenaries Who Got Away With War Crimes is published by Pluto Press, £12.99.