BOOKS Manufacturing a way out of crisis

WILL PODMORE recommends a productive solution to post-pandemic economic ills

The Road to Recovery: Reviving Manufacturing after Coronavirus
by John Mills
(Civitas, £5)

IN THIS new pamphlet by noted economist John Mills — a timely and significant intervention in the debate about how we move forward from the present pandemic crisis — the author urges the rebuilding of our manufacturing industry. 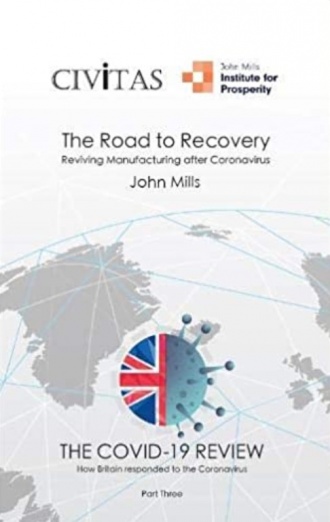 The share of GDP derived from manufacturing has fallen from a third in 1970 to a tenth now.

As a result, this country is far less self-reliant than most other developed nations. To recover, manufacturing need to increase from 10 to more like 15 per cent of GDP.

To rebuild, we must invest more but it has been far too low for far too long. Gross investment from 2005 to 2016 was 17 per cent of GDP annually, our social rate of return was eight per cent and our growth rate just 1.4 per cent. Those figures compare poorly with global averages for the same period.

Worse, we invest a declining share of GDP in machinery and equipment, the most productive forms of investment, which stands at only 2.8 per cent, down from 3.6 per cent in 2008.

Britain's balance of payments deficit is close to £100 billion a year, nearly 5 per cent of GDP, and to finance this, too much has been borrowed and too many national assets sold.

A 2014 Office for National Statistics  study found that foreign-owned companies generated nearly a third of our annual gross value added. It will be far more now. Public interest tests on any proposed takeovers from abroad and tax penalties on the buying of property assets by foreign interests would be a good move.

Instead, successive governments have followed Thatcher’s priorities — finance first, who needs industry? High interest rates and tight money in the 1980s, followed by the liberalisation of capital imports in the 2000s pushed up the sterling exchange rate to nearly double the mid-1970s level.

Mills urges the lowering of the pound and history proves that devaluations work. In 1931, it was devalued by 24 per cent and, by 1937. the economy was growing 4.6 per cent annually, manufacturing output was 48 per cent up and there were 2.7 million more jobs.

What is to be done? Mills argues that we should make the nationalised banks invest more in productive businesses, discourage inward investment, because it drives up the exchange rate, and impose capital controls.

Banks are reluctant to lend to manufacturing industry, so the state needs either to direct them to do so or the state will have to do the job. “Bank lending to industry ... needs to be firmly guided and possibly underwritten by the state, as indeed has been done to support companies generally during the current coronavirus pandemic,” Mills writes.

“Concentration should not, however, be on propping up existing companies which are short of liquidity but should be primarily targeted at encouraging manufacturing investment across the board.”

How can this be achieved? The 40-year-long policy error of overvaluing the pound is not just an intellectual error. If it were, it would have been corrected by now. This high-pound policy meets the needs of the ruling class, which knows quite well that the high pound is crippling industry but is happy to do this in order to destroy the working class which threatens its rule.

Now, as Brexit independence approaches, Britain can free itself from the demands of global capital which has been stifling all too many economies. As globalisation has accelerated in the last 40 years, the growth rate in the developed world has fallen from four per cent a year between 1950 and 1975 to two per cent since 2000.

Without the changes that Mills proposes, we are all too likely to have “another lost decade of stagnant or (more probably) falling real living standards — combined with more long years of public sector austerity — for the bulk of the population from the beginning of 2020 to 2030.”

But with independence, our future is in our hands. We can rebuild industry, we can restore the economy after the virus.

What is stopping this? The political power of finance capital is an obstacle. But what really holds us back is an all-too-prevalent unwillingness to take responsibility for our country and our future by rebuilding our manufacturing skills and capability.

Otherwise, we face decades of decline and dependency.