Nonviolence is far more effective politically than violence, an argument for pacifism

Quaker Quicks – Why I Am A Pacifist
Tim Gee Christian
Alternative Books, £6.99

FORMED soon after the English Civil War, the Quakers — AKA the Religious Society of Friends — are perhaps best known for their commitment to working for peace. 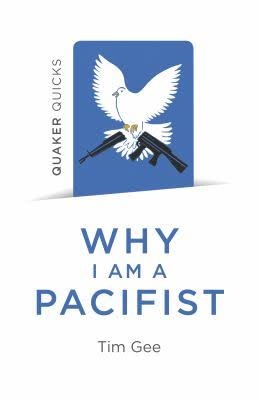 Over a quick and very readable 60 pages Quaker and activist Tim Gee explores this tradition through the concept of pacifism.

Popularly understood as a passive “refusal to engage in violence,” Gee expands on this, noting it can more accurately be understood as an active, not passive, process, such as non-violently resisting oppression or challenging the ideological systems which underpin violence.

As these examples suggest, pacifism isn’t necessarily about avoiding conflict — conflict in many forms is, after all, arguably a driver of human progress, he contends — but making sure conflict is managed “in a way that respects human life.”

While violent action and resistance tend to be prized and elevated in our culture, Gee highlights Erica Chenoweth and Maria Stephan’s paradigm-shifting 2012 study Why Civil Resistance Works: The Strategic Logic of Nonviolent Conflict.

Moreover, they note nonviolent resistance campaigns are more likely to lead to democratic forms of government than violent campaigns.

The huge impact of the Extinction Rebellion protests in the UK on public consciousness and Westminster politics is further evidence of the power of nonviolence. “These protesters are quite unique because [they] are by and large peaceful,” Laurence Taylor, the deputy assistant commissioner in charge of protest policing for the Metropolitan force, recently admitted.

“It is almost easier to deal with people who are being violent towards you, because you can use a level of force commensurate with that.”

Gee is particularly good at highlighting the intersectionality of pacifism — with brief chapters on its relation to race, “the violence of economic policy,” climate change and gender.

“The crisis of violence needs to be understood as at least in part a crisis caused by the prevalence of patriarchy and the problems of toxic masculinity”, he notes.

With its useful set of references and a refreshing lightness and clarity to the prose, Gee’s book is a brilliant primer for anyone interested in pacifism and nonviolence.

For those wishing to explore the topic further I would strongly recommend Gee’s inspiring 2011 book Counterpower: Making Change Happen.