BOOKS Post-democracy: After the Crises by Colin Crouch

POST-DEMOCRACY is a follow-on from Colin Crouch’s previous book, published in 2003, about the threats to democracy that have been emerging in many advanced capitalist countries. 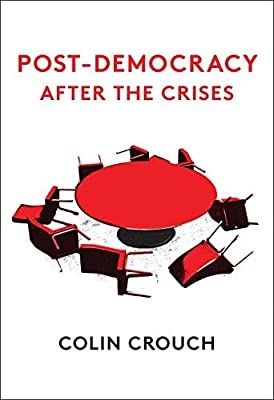 It argued that democratic structures were being hollowed out, with power increasingly concentrated in wealthy business elites, along with their political counterparts who were backing them. Neoliberalism was becoming the only game in town.

As if this wasn’t disturbing enough, Crouch argues in his new work, his analysis was written before the financial crisis in 2008 and the situation has been deteriorating even further since then.

Reflecting on the changes that have been taking place since that crash, he identifies the effects of increasing financialisation and the impacts of austerity, with those least able to afford it bearing the brunt of the costs.

Meanwhile, corporate lobbying has continued to develop, finding new ways of manipulating public opinion via right-wing think tanks and social media, including Cambridge Analytica’s interventions in both Donald Trump’s election campaign and the Brexit referendum in 2016.

Most chillingly, the book explores the growth of what Crouch describes as “politicised pessimistic nostalgia”—  the growing far-right climate developing across Europe and elsewhere, including the US.

One of the book’s particular strengths lies in its coverage of these international trends. It explores the variety of ways in which the banking crisis in 2008 has been impacting on political processes in different contexts.

There have been common factors — the direction of travel has been towards undermining consumer protection and labour standards, along with the development of increasing inequalities. Unsurprisingly,  playing on people’s anxieties and their fears of the “other,” this has been fertile ground for politicians of the far right.

As if this scenario weren’t disturbing enough, it’s significant that this book was written before the coronavirus crisis reached its current international dimensions. The challenges that this poses are only just beginning to emerge, whether these are challenges to civil liberties or to people’s livelihoods or, most likely, both. They raise questions for the left that are way beyond the scope of this particular publication.

Some on the left may disagree with aspects of Crouch’s analysis, including his discussion of the nature of the changes that have been taking place in the class structure of Britain, which is not a Marxist analysis.

While there may well be differences of view about some of  his approach, Crouch's book raises issues of major  and increasing concern. Many of his conclusions have particular relevance, including his emphasis on the importance of critical political education.

This, he argues, needs to form part of wider strategies to confront the insidious messages that are being propagated by the far right.

A thought-provoking book, whether you agree with it all or not.

Post-Democracy: After the Crises is published by Polity, £15.99.