BOOKS Pushing Back to Ofsted by Richard House

Riposte to an inspection that closed a Gloucestershire school

IN DEDICATING his book Pushing Back to Ofsted to “the country’s brilliant teachers” who labour under “unnecessary and demoralising regimes of compliance and fear,” Richard House informs us who really suffers through the hellish imposition of Ofsted. 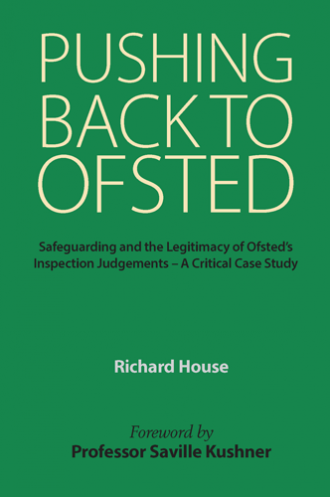 Teachers, certainly, but ultimately the children who should be learning and growing in brainpower in our schools.

His account is an insightful and detailed riposte to an Ofsted inspection that closed a Gloucestershire school. In this instance, it was a privately run Steiner school, but it could have been a state school in any of our villages, towns or inner cities which failed to observe Ofsted diktats and what House calls their “inflexible, tick-box mentality” and anti-educational onslaught on teachers and pupils.

He describes “all manner of draconian judgements” against Wynstone’s School, based upon Ofsted’s refusal to recognise the school’s founding commission of building “creative, artistic, imaginative and above all humanising” principles and a vision of education as a healing force for its children.

Instead, in came Ofsted, as it does in any school or college, with its formulaic “audit culture-driven, outcomes-obsessed approach,” making spurious judgements upon teachers and a whole-school culture that it has no intention of beginning to understand, “assuming that its own worldview is necessarily the correct one and that others are necessarily wrong.”

So its commentary on Wynstone’s, that its ambiance was toxic, fomenting “considerable turbulence, a detrimental culture,” was entirely at odds with the intentions and work of the teachers and the wishes of the parent body.

What is most significant about House’s book is that it is a crucial exemplar of resistance, a fightback against authoritarian and unjust judgement that calls for all Ofsted-assaulted schools to make similar reasoned and powerfully argued rejoinders as part of a unified national campaign against their backward misjudgements and contempt for teachers.

Wood and Jeffrey wrote in 1996 that such Ofsted demolition of schools “induces a trauma which penetrates to the innermost being of the teacher” and provokes thousands of excellent colleagues to leave the profession.

House identifies Ofsted’s over-intrusion and over-surveillance and their wilful destruction of classroom work which is “a living, creative art... with human relationships being an absolute central aspect of any education experience.”

Plans for a transformation of the assessment of schools must be a vital task for Labour, with the full and active involvement of teachers and their organisations.

US sanctions Houthi officials for ‘worsening the humanitarian crisis in Yemen’

Unions call for '1945 vision' as Sunak prepares to unveil Budget