Book Review The Sex Factor: How Women Made the West Rich by Victoria Bateman

IN THIS book, Victoria Bateman peels away the layers of traditional economics to reveal her answers to some pressing issues of our time and in the process argues that we all must revaluate the role of women historically and today in terms of how they’ve contributed to economic growth and prosperity. 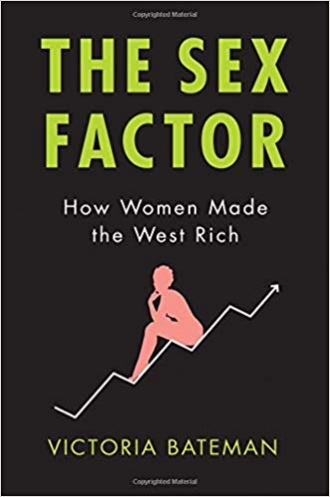 She contends that all too often women are seen as passive beneficiaries rather than active creators in economic growth.

“Until greater significance is placed on gender equality as the cause and not merely a consequence of economic growth, women’s freedom will not be given the importance it deserves, and gender inequalities will go on unaddressed,” she states.

Such a response may be the result of Bateman attempting to cover such a broad historical period from the time of the Industrial Revolution to today in a little over 180 pages.

As a consequence, she has had to restrict herself by only addressing how women made the West rich within systems that are both pro-capitalist and pro-market, albeit with some tweaking.

In one of the most interesting chapters, Bateman discusses Marx — whom she describes as a secret sexist — and while agreeing with Marxist feminists who point to the power imbalances and inequality for women in the market system, reasserts her belief that markets and gender equality can coexist. Gender equality is good for growth, she asserts.

She encapsulates her vision more sharply in four-point manifesto on making economics more relevant by taking into account the role of sex and gender on growth and prosperity.

Her argument that economics can appear dry and increasingly irrelevant to people’s lives has doubtless informed a lively written style which makes the book more readable and thus accessible to readers who may be new to economics.

It should encourage many more to think about factors such as the value of unpaid caring in an economy where everything has a price.