BOOKS Snowden's Box: Trust in the Age of Surveillance by Jessica Bruder and Dale Maharidge

Why everybody has the right to have something to hide

IF SOMEBODY gave you something very secret, something so secret that intelligence agencies might well one day come looking for it, what would you do? 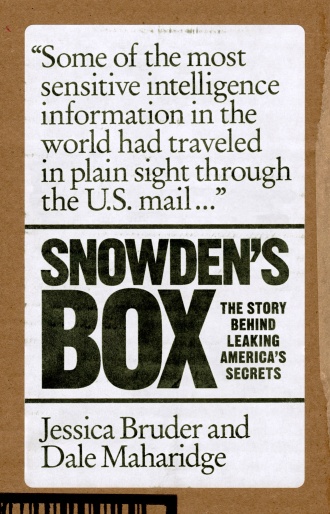 Jessica Bruder and Dale Maharidge are two journalists who found themselves faced with that conundrum. Through a chain of loose connections, they ended up receiving and handling a package through the post in 2013.

They didn’t know what it contained or who had sent it, just that it was dynamite. As they later found out, it had been sent by the then-unknown whistleblower Edward Snowden.

Snowden’s Box tells the story of plunging into a whirlwind of secrecy and emerging from the other side. It’s a gonzo story, told with a sense of humour by two good friends in which they play up the aspects of old-school journalists forced to become adept in digitally encrypting their emails and putting their phones in the fridge to block any recording.

The logistics described are funny in retrospect but were clearly chilling at the time. Maharidge describes the dilemma he faced when he needed to pass on Bruder’s address to director and campaigner Laura Poitras.

Although he’d visited Bruder’s house, he couldn’t remember the exact house number. Suddenly fearful of keyloggers and phone taps, he decided to use Google Streetview and virtually walk round the neighbourhood, zooming in on her house number as he passed it.

This is a journey into paranoia and, strikingly, the ignorance even of individuals who are now trusted sources about surveillance is telling.

But eventually the combination of analog journalists and digital Snowden worked. An unsung hero who emerges is Micah Lee, who sat just enough in both worlds to be trusted to act as a link without knowing any of the details.

For all the cryptography, it was real-life networks of trust that allowed the package to move undetected before exploding onto the front pages.

Bruder and Maharidge tell a good yarn and make a strong case against government surveillance. They argue that everybody should have something to hide. Laws and norms change in response to changes in behaviour and that process is a fundamental part of modern democracies.

If everybody knew with certainty that if they broke the law they would be caught, how would social attitudes ever change?

As the authors note, “most of the institutions and endeavours we regard as ironclad ... are actually held together with chewing gum and duct tape.”