THIS partly factual and partly reimagined account of George Orwell’s final years is a surprisingly satisfying read for those of us who are the inheritors of his slurs against so-called “Stalinists.” 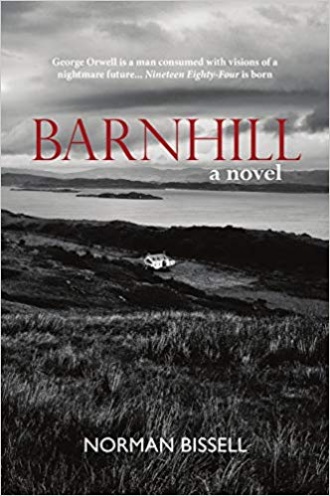 There are imagined conversations between Orwell and various intimates, self-justifying accounts from his second wife Sonia Brownell and excerpts from some of his letters and novels.

Author Norman Bissell is clearly in sympathy with his main subject and the various lovers, family members and literary types who experienced Orwell’s growing literary acclaim and deteriorating health in the latter half of the 1940s.

Yet even he cannot ignore his principal character’s startlingly contradictory and over-wrought opinions.

The Orwell that emerges is one struggling to reconcile his reactionary social views (or overly-romanticised and patronising ones of the real working class) with his various dalliances with Trotskyism.

His offhand and cynical offers of marriage to various women with the promise of their becoming literary widows simultaneously displays both his emotional coldness and neediness.
Bissell’s Orwell is in full paranoid mode throughout.

Convinced he is on Stalin’s hit list for writing Animal Farm, he lashes out at anyone sympathetic to the communist cause. He is utterly vile to David Holbrook, his housekeeper’s boyfriend and Communist Party of Great Britain member who hits back on reading some early drafts of 1984, castigating Orwell as “a gloomy old bird.”

And towards the end of the novel, as he lies in hospital Orwell hands Celia Kirwan a list of communists and communist sympathisers: people not to be trusted with the British government’s turbo-charged anti-Soviet propaganda efforts.

Barnhill itself refers to the cottage Orwell rented on Jura in order to protect his health and work on 1984. It is during these sojourns on the island that the more attractive side of the man is glimpsed.

He is practical and hardworking in his attempts to raise crops and sustain himself, his adopted son from his first marriage to Eileen O’Shaughnessy and his rather embittered sister, Av.

Bissell suggests that many of the most shocking scenes in 1984 might have been prompted by the rawness of the life he encountered at Barnhill. A close encounter with two rats the possible reason for the Winston Smith torture scene.

Bissell has a bit of fun at Orwell’s expense as well. The chapter devoted to an imagined visit to Glasgow during New Year and his fascination with proletarian eating habits and social friendliness has, possibly unconscious, echoes of Harry Pollitt’s execration of Orwell for his sniffiness in The Road to Wigan Pier.

Barnhill is certainly a good novel in itself. It is well worth the time to read and the expense to purchase. But for those who already have clear cut views of Orwell as a writer and as a human being, it won’t shift opinions either way.