IN HIS introduction to the 11 essays in this book, Martin Empson argues that the multiple environmental crises which pose an existential threat to humanity – including climate change and biodiversity loss – are caused by the nature of capitalist society and that those who argue that we should change our individual lifestyles are missing the point. 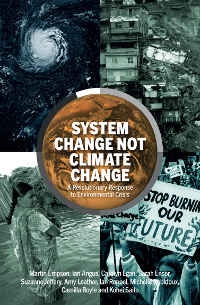 “We need to challenge the very existence of those fossil fuel corporations and the system that needs them,” he maintains.

In other contributions, Ian Rappel’s critique of the increasingly neoliberal idea of “natural capital” is thought-provoking; as is Camilla Royle’s discussion of the politics surrounding the concept of the Anthropocene; as is Amy Leather’s point that nothing sums up the irrationality of capitalism more than single-use plastics — “materials that can last practically forever are used to make products designed to be thrown away.”

Contributors to the book include  members of the Socialist Workers Party (SWP), a welcome sign that the party is now making the climate crisis a priority in terms of campaigning.

Yet I found myself deeply frustrated by many of the authors’ cult-like reverence for Karl Marx and Friedrich Engels. Incredibly smart political philosophers they might have been but how useful are their 19th-century writings in terms of understanding climate change today?

The book seems to have come out of a closed, small circle of peer review and citation – a huge red flag in serious academic research, with Royle’s chapter citing Canadian socialist Ian Angus and Monthly Review editor John Bellamy Foster, Judith Orr and Chris Harman from the SWP, with  feedback from Rappel and Empson and the SWP’s Alex Callinicos and Joseph Choonara.

The reader is repeatedly told that we must replace capitalism with a socialist system, to solve the climate and environmental crises.
Yet how this admirable goal sits with the March 2019 statement from the UN explaining that the world has just over a decade to stop irreversible damage from climate change and experts warning that deep emissions cuts need to happen in the next few years is never explored.

That incredibly short timescale strongly suggests that activists in Britain and beyond will almost certainly have to work out how to force radical action from within the existing capitalist system.

Systems Change Not Climate Change is published by Bookmarks, £8.