THE still widely held belief that the Mayflower settlers laid the foundation for “freedom and democracy” in the US is the stuff of classic textbook histories of the Puritan settlements in New England. 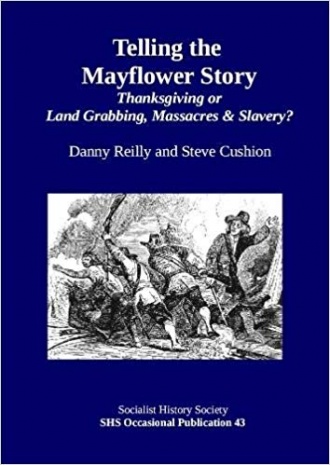 With the 400th anniversary of the Mayflower landing looming in 2020, this pamphlet by Danny Reilly and Steve Cushion re-examines the history behind that belief.

An understanding of the development of European settlement there demands an account of the genocide of the indigenous population, along with New England’s role in slavery and the slave trade and the pamphlet details the full history of the colonisation of north America as a “three-cornered” process, involving not only the Mayflower settlers but also First Nation peoples and African slaves.

The authors describe their land-grabbing tactics, which involved wars with indigenous peoples and massacres in order to displace them. They viewed their success as sanctioned by God.

During the 17th century, the First Nation peoples of New England saw their numbers dwindle from some 500,000 to 250,000 due to warfare, disease and the results of dislocation. Many were enslaved and despatched to English colonies in the Caribbean in exchange for African slaves.

Pertinent quotations mark this account. “In a little more than one hour, five or six hundred barbarians were dismissed from a world that was burdened with them ... thus the Lord was pleased to smite our enemies ... and to give us their land,” a certain Major John Mason recalled.

Reilly and Cushion go on to expose the role of the settlers in keeping and trading slaves. The Pilgrim Fathers claimed that slavery was sanctioned by God and they were privileged to enslave anyone who was not a true believer, freedom and democracy only applying to members of their own church.

Small-scale slavery in New England disappeared only when it became uneconomical. The slave trade however was more profitable and the authors describe the particular triangle of trade New England was involved in.

Ships from the colony captured slaves in West Africa and sold them in the Caribbean in exchange for sugar and molasses which were sent to New England to supply rum distilleries. The rum was shipped to West Africa where its consumption facilitated slave capture.

The slave trade created great wealth, with the growth of the slaving ports of Boston, Salem and Nantucket, the development of boatyards to build slave ships and rum distillation, which was the largest manufacturing industry in the region, producing five million gallons annually.

In detailing how the underpinning of the political traditions of the US is based on genocide and slavery, the main thrust of the authors’ argument is that the 400th anniversary of the Mayflower landing should reflect facts, not the whitewashed myths that have previously been promoted.

They provide a brief outline of past celebrations and show how campaigning has modified some aspects of the planning for the quadrennial commemorations in the town of Plymouth in
the US and Plymouth in England.

But they end with the question: “Will the organisers of the 400th anniversary break with the inglorious tradition of sanitising the Mayflower story?”