JAN WOOLF recommends an exposé of shoe production globally, one of the worst examples of human exploitation for profit

ARC OF EXPLOITATION: Trainers on show at a trade fair Photo: Coup d'Oreille/Wikicommons
×

Foot Work: What Your Shoes Are Doing to the World
by Tansy E Hoskins
(Orion Publishing, £14.99)

THE strapline of Foot Work is a nice precis of this book’s content and polemic. Bracingly well written, it’s evident from the beginning that we’re in good authorial hands.

This is a work of love, research and polemic from Tansy E Hoskins, with a great deal of first-hand reporting. And it also has the power of narrative: each chapter could be a standalone short story or documentary episode in itself. 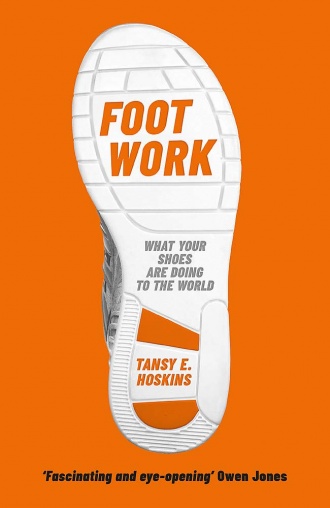 Those cleverly titled chapters — Lust for Kicks, Living on a Shoestring, Hell for Leather or Kick Back — begin with a human being in a situation, like Muhammad’s half-hour walk to the shoe factory to fill his bag with shoe parts that he takes home so his family can assemble them and earn under £8 a day.

And there are facts: every single day in 2018, 66.3 million pairs of shoes were manufactured across the world, which adds up to more than 24 billion annually. They sit alongside accounts of the place of the shoe in fairy tale and folklore, the early fetishisation of shoes, the history of shoemaking and contemporary fanaticism for the right brand, a range of inquiry that makes the book so enjoyable.

Hoskins traces the global journey of shoes, from the misery of a developing-world factory, the assemblage of parts elsewhere, retail outlets and on to your feet. Whether these are the cheapies of Shoe Zone or high-end designer brands makes no difference to the arc of exploitation.

There are lots of “I didn’t know that moments” such as the fact that sandals from Tutankhamun's tomb have insoles decorated with images of Egypt’s enemies so that he could symbolically crush them with each step. And Melania Trump wore ludicrous stilettos while visiting the debris of Hurricane Harvey, sending out the message that the wearer neither labours nor uses public transport.

Hoskins reveals fascinating insider accounts of the inner workings of the Textile Reuse and International Development organisation, the contradictions of the charity sector and a peek at the baroque excesses of  Sneaker Con, a convention where thousands of “sneaker heads” pay £25 to browse shoes costing £500-£700, amounts that would keep Muhammad’s family for  months.

But there are also vivid accounts of workers fighting back. In fact, workers in struggle dance nicely through the book, as do researchers like Dr Kate Fletcher coining the term “the craft of use,” a way of interacting with what we wear that isn’t about the need to buy more. Fashion has a heavy tread, but the really cool can find imaginative solutions.

At this time of global lockdown, less shoes are being worn out, so there's more time in to reflect on the globalised exploitations of their origins — and to read this book.

Ms Hoskins has the last word: perhaps they are as good an object as any to lead us into a brighter, fairer future. If not, they should be a reminder that in them we carry the world.