BOOKS Vic Heath: Just One of the Working Class

Outstanding memoir of a rebel with a revolutionary cause

BEFORE moving out of London to Luton in 2002, Vic Heath was a very familiar and prominent figure as Ucatt convenor steward of Camden Council’s direct works department.

A communist and poet, he was involved in many of the battles in the borough over the last half of the 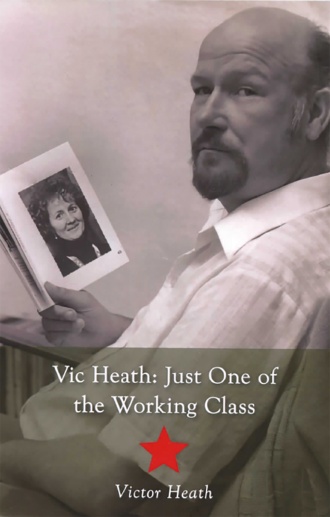 20th century, including the 1960 rent strike, and his book takes us on his long, colourful, very varied and always warm-hearted life journey.

We gain fascinating insights into his early years, from suffering from lead poisoning as a young child — lead being in common use even for toys — to evacuation during the second world war with three of his siblings.

On leaving school at 13, Heath went on to work at various jobs, including in a carpenter’s shop. There the Hungarian Hugo, who had fought in the Spanish civil war, gave him a copy of the Daily Worker, which he then read every day although it wasn’t until 1960 that he joined the Communist Party.

This was the period of “Reds under the bed,” an expression that annoys Heath “because it made it sound like we were creeping around... when the only things we were trying to upset were the injustices forced upon ordinary people day in and day out.”

Heath had become an active union member, joining the Transport and General Workers Union, then later the Amalgamated Union of Building Trade Workers, which became Ucatt. For his active involvement in the union, including as federation steward on a number of building sites such as the Barbican, Heath was blacklisted, leading him to be fired from jobs, as at Hinkley Point.

On the Barbican, he fought for decent toilets, taking advantage of a clause in the collective agreement that “if there weren’t flushing toilets and washing facilities available to workers on site, then the workers were entitled to walk up to 300 yards to the nearest public toilet.”

This meant 200 men marching to the public toilets at St Paul’s before the management gave way and built toilets, a shower unit and washing facilities.

We learn of the discrimination against him, not just blacklisting, but as a “London boy” during evacuation, being charged with loitering with intent in Camden as he waited for his girlfriend and then, cast as a “Camden tomboy,” being sent to borstal for 14 months after defending himself against provocations from “rich boys” from Highgate.

In between we learn of his many travels in Africa, Australia, India and South America and later to the German Democratic Republic and holidays all round Eastern Europe with his family.

What comes across in this account of his life is Heath’s incredible warmth and care for humanity, his love of his wife and their son — who sadly died in his forties — and how he learnt to express this and to fight off depression through poetry.

His is a very readable and enjoyable book, which presents a vivid and moving perspective both on a towering figure in the labour movement and post-war history in Britain. Highly recommended.

Just One of the Working Class by Victor Heath is obtainable from Marx Memorial Library, £5, marx-memorial-library.org.uk. This is an edited version of a review that first appeared in Camden New Journal, camdennewjournal.com