BOOKS The War Against the BBC

INTO BATTLE: Boris Johnson arrives for a BBC interview
×

PRIOR to reading The War Against the BBC by Patrick Barwise and Peter York, I have to admit to not being the BBC’s biggest fan. I have long regarded the Corporation as hostile to the left, with a notable recent chapter in this process being some of the appalling treatment of Jeremy Corbyn. 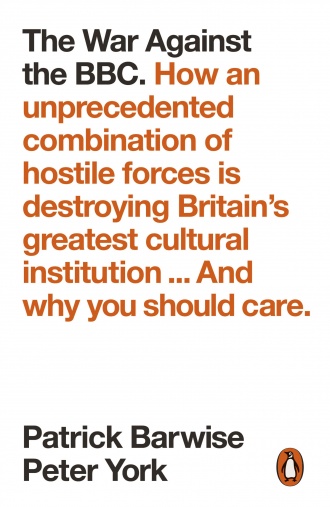 But, having read the book, the importance of defending the BBC against an unholy coalition ranging from the likes of Boris Johnson, Dominic Cummings, Rupert Murdoch and a number of spurious right-wing think tanks becomes all the more apparent.

The authors meticulously examine all of these forces set on destroying the broadcaster, from the likes of Cummings, who’s set on creating a US media-type landscape dominated by right-wing commercial operations, to the Murdochs whose opposition — dressed up in neoliberal ideology — is more about removing a powerful commercial opponent.

Yet the biggest threat to the BBC over the past 10 years has been the Tory government, which has tried to destroy the Corporation by stealth.

First, there has been the freezing of the licence fee, then the decision in 2015 to make the Corporation pick up the bill of £750 million for the free licence fee for over-75s.

The effect has been a 30 per cent cut in funding of the Corporation of £1.4 billion, if it had kept pace with inflation.

The unfairness of it all is underlined by the fact that the broadcaster saved the government £2.34 billion by the way in which it handled the digital switchover from analogue. None of that saving was given to the BBC.

These cuts all come at a time when the Corporation faces growing competition from the likes of Netflix and Amazon, as well as social media giants like Facebook and Twitter.

Tory opposition seems mostly grounded in a fundamentalist antagonism to the BBC on market economic grounds — many Tories appear to see the BBC as simply another nationalised industry in need of removal.

The authors destroy the classic Tory argument that the BBC is left-leaning and biased against them, finding that the BBC usually bends towards the government of the day but more so when it is Conservative. Given the electoral success of the Tories over the years, it is difficult to see what that party’s problem is with the BBC.

Yet there has been an unruly coalition of the right, made up of the likes of the Daily Mail, the Sun, the Telegraph, The Times and the Express, which continually attacks the BBC. One of the central accusations is that the BBC is anti-Brexit and pro-EU, despite the lack of evidence to support the accusation.

Much of the ammunition has been supplied by right-wing think tanks such as the Institute of Economic Affairs, Newswatch and New Culture Forum, all situated around Tufton Street in central London.

Barwise and York's detailed study is a call to arms to defend the BBC and Public Service Broadcasting (PSB) against the ongoing assault by myriad opponents determined to inflict a death by a thousand cuts and make it impossible to compete in the ever-more competitive world of the media market place. Eventually it will be left to die away.

The BBC has battled on valiantly despite this onslaught. It is efficient, continues to provide a comprehensive service and remains popular with the public — a survey in 2015 showed that 99 per cent of the population use at least one of its services in a single week.

The period of the pandemic should be one of value for the BBC, with ever greater numbers turning to its news services for reliable information. In an era of fake news, the need for PSB has never been more important. One illuminating bit of data concerns where the public go for impartial news, with the BBC way out in front on 44 per cent. Next comes ITN on 10 per cent, Sky News on 6 per cent and Channel 4 News on 5. Newspapers hardly register, with The Guardian highest on 3 per cent.

Moving forward, the BBC needs to be valued for what it provides in this country and beyond. The Tory government needs to be persuaded to call off its dogs and a proper funding settlement provided that can provide certainty and adequate resourcing for it to go forward.

The BBC needs such support so it can prosper, not demolition at the hands of a bunch of baying market-fundamentalist fanatics. This book makes that argument comprehensively.

The War Against the BBC is published by Penguin, price £10.99.