Book Review Cause for rebellion in Catalonia

The ongoing crisis on the Iberian peninsula hasn't gone away, says ANDREW BIBBY, and a new book explains why

Catalonia Reborn: How Catalonia Took on the Corrupt Spanish State and the Legacy of Franco
by Chris Bambery and George Kerevan
(Luath Press, £12.99)

FOR just a short time in autumn last year, the world’s media descended on Barcelona. On October 1, TV showed Spanish paramilitary police batoning their way into polling stations, trying to stop the plebiscite on independence called by the Catalan government. 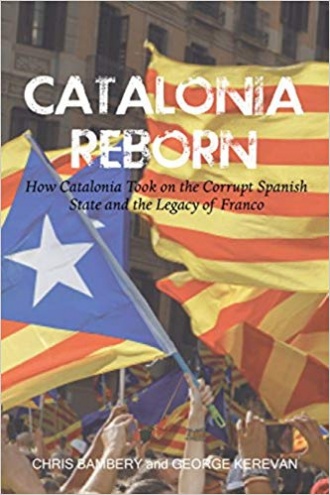 Then, three weeks later, the media was back for the moment when its head Carles Puigdemont declared independence for Catalonia and then almost immediately put it all on hold “for negotiations.”

The attention of the world has moved on but in Catalonia the flags and banners are still out. Several leading activists have already been imprisoned for over a year and earlier this month Spanish prosecutors called for a 25-year jail term for Puigdemont’s deputy, on grounds of rebellion against the Spanish state. Puigdemont himself is in exile. Those “negotiations” do not appear to have gone the way the Catalans hoped.

A new book suggests that we ought not to allow our attention to wander too far from what is happening in an area of Europe where Britons have long enjoyed their holidays. Catalonia Reborn is written from a strongly left-of-centre perspective, taking a class approach to the background to the October 1 referendum — the event that Catalans call 1-O, in reference to its date.

Chris Bambery and George Kerevan quickly fill in the historical details, explaining how the Spanish state was originally put together through royal marriages of convenience. Portugal,

one part of the Iberian peninsula, managed to claim independence but Catalonia, another constituent part and with its own language and claims to nationhood, was absorbed into what became the Spanish empire.

But the main focus in Catalonia Reborn is firmly on more modern times,. There's an account of the overthrow of the Primo de Rivera dictatorship and the monarchy in 1931, the birth of the left-of-centre Spanish republic and, with it, the declaration in Catalonia of a Catalan republic.

Then follows the terrible story of Franco’s putsch, the civil war and the defeat of the republic, with working-class areas of Barcelona suffering particularly from Franco’s wrath. Lluis Companys, who had led the first Catalan government, was later murdered in prison by Francoist forces.

This is a story which, partly thanks to our memory of participants in the international brigades, may be relatively well known in Britain. Yet what happened after Franco’s death in 1975 is probably much less so.

The authors build a very strong argument that the Francoist conservative institutions — particularly the judiciary, the army and the police — were left almost untouched by the introduction of democratic parties and elections.

The Spanish state’s 1978 Constitution, used last year to declare that Catalan moves towards self-determination were subversion, enshrined several of Franco’s key concerns, particularly the indivisibility of the Spanish state and the primacy of the Castillian (Spanish) language.

Keen to see Spain safely in the EU – and, just as important, in Nato – the European Community didn’t inquire too deeply as to the way things were being set up. The authors describe this as a highly flawed democratic transition and out of it has come, they claim, the extraordinary levels of corruption in the Spanish state as well as the reliance on brute police strength in times of protest.

Catalonia’s attempt at self-determination is not some whimsical romantic adventure, they argue, but rather the direct result of a fundamental lack of democracy.

There's a lot to learn from this book but it does suffer from far too many typos and errors — including, embarrassingly, a spelling mistake in large print on the back cover — and the hectoring tone of the authors attempting to tell us exactly what we should be thinking is tiresome.

The case Bambery and Kerevan build is quite strong enough without resorting to such agitprop exhortation.

Losa warns Scotland not to look too far ahead

Household to get £5,000 to replace gas boilers, but unions warn flawed heat pump plan will cause unemployment and rising bills