Editorial: We need homes and healthcare, not more arms spending

Prime Minister Boris Johnson looks at a Typhoon fighter jet at RAF Lossiemouth, Moray, during a visit to the Highlands and Northern Isles of Scotland in July

IT IS no wonder that people are up in arms about the Tory government’s new military spending plans.

In the midst of a deadly and expensive pandemic, rising unemployment, multiplying food banks and rocketing child poverty, splurging an extra £4 billion a year for the next four years on “defence” is perverse.

Who are the Ministry of Defence and its budget defending us against?

Which countries and their governments are queuing up to launch a military strike against Britain or its so-called allies?

The nearest we have come to an armed attack on home soil has been a series of terrorist attacks on civilians with machetes, rogue vans and suicide bombs.

It is difficult to see how new supplies of modern “kit” — a cosy and duplicitous word for deadly armaments — would have prevented such outrages.

While it’s true that Britain’s armed forces occasionally suffer casualties in Afghanistan and the Middle East, the remedy is not to re-arm them but to withdraw them from where they are not wanted.

In his attempt today to justify the fresh increases, Boris Johnson announced with all the gravitas he could muster: “I have decided that the era of cutting our defence budget must end, and it ends now.”

Furthermore, he added, expenditure had been “trimmed and cheese-pared” for decades.

The lies were betrayed by his moving lips. Britain’s military spending has risen in every year since at least 2016.

It increased during most of the post-war period until the mid-1980s, since when it has gone down and then up in almost equal measure.

The Prime Minister went on to claim that his £16.5bn package will “boost our global influence,” oblivious to the damage done to Britain’s standing in whole regions of the world by its long record of bombing, invading and occupying other people’s countries.

Not that the crimes committed by British imperialism, past and present, trouble Sir Keir Starmer too much.

In his post as leader of the opposition, he rushed to support the extra spending, although he was worried about where the money might come from.

The likelihood is that some of it will be filched from the overseas-aid budget.

Where will it go? Johnson expressed his boyish enthusiasm about all the shiny new warships and laser-guided weapons.

The Tory general-election pledge to create a “Space Command” will be realised, enabling greater British participation in the race to militarise space.

Outgoing President Donald Trump has described space as “the world’s new war-fighting domain,” and vital to maintain US superiority over China and Russia.

Unfortunately, although president-elect Joe Biden might tone down the belligerent rhetoric, in almost all military and foreign matters he will pursue the same imperialist agenda as the current president-defunct.

Tragically, the same pro-imperialist consensus exists between the Tory and Labour front benches here, too. They both cherish nuclear weapons and Nato.

Instead of welcoming bigger subsidies and profits for Britain’s arms industry, Labour and the trade unions should be calling for investment in civilian production to build homes, medical equipment and other essentials.

That would do more to defend the peoples of Britain than showing off new weapons in the South China Sea or Afghanistan. 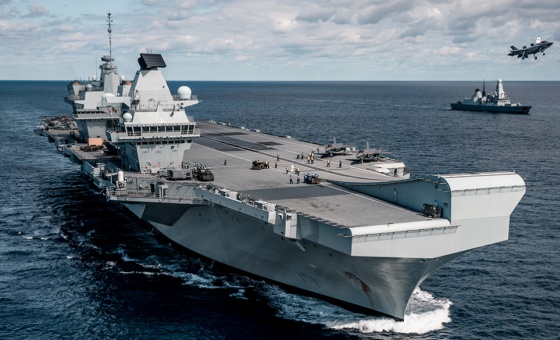