DAVID LAMBERT reveals the untold story of how the eco-occupation of London’s Waterloo Bridge in April was planned, financed and executed

Jeremy Corbyn’s well publicised attachment to his allotment serves as an interesting backdrop to the enlisting of gardening and cultivation in the historical struggle against the privatisation of public spaces and the contemporary uprising against ecocide.

Throughout history, gardening has always been symbolic, reflecting different conceptions of the human relationship to the universe. In also embodying a relationship to society it has also always been political, even while often unacknowledged. In the 18th century, Horace Walpole deliberately politicised his garden history: French and Italian gardens embodied absolutism while the English landscape garden of Capability Brown reflected the preferable system he called “liberty” ushered in by the parliamentary settlement of 1688.

In the 1970s a new type of gardening was enlisted in more radical political analysis. “Guerilla gardening” began in New York which at the time was virtually bankrupt and in a state close to social breakdown.

Part of the response was the adoption, often unauthorised, of derelict lots by activists who turned them into temporary gardens for the public. In 1973, an East Village resident, Liz Christy, began clearing decades of rubbish from a city-owned plot on the corner of the Bowery and East Houston Street. She named the group she formed the Green Guerillas, and soon after she persuaded the city authorities to grant her a lease of $1 a month. This garden escaped the usual fate of being redeveloped and is now on the US National Register of Historic Places.

Gardening was enlisted in a resistance movement, pitted against the indifference to the public realm of those in power and making a defiant gesture of communality against the prevalent ethos of free-market economics.

In this sense these were gardens being repurposed; away from being the epitome of private ownership, control and individualism, to a reflection of the shared ownership of the city’s public environment, and empowering often marginalised communities to exercise agency over that environment.

This was not just a practical decision about the impact of disrupting key crossing points; it was a poetic decision about the symbolism of bridges: a bridge as a connection, a threshold, and a way of overcoming a barrier. Similar reasoning lay behind the decision to make Waterloo Bridge a key focus of the “Rebellion Week” in April 2019.

From the start it was about a garden-intervention on a bridge, not least in response former mayor Boris Johnson’s failed Garden Bridge fiasco. There may have been a satirical point to be made but there was also a genuine understanding of the appeal of transforming a bridge into a hanging garden above the Thames.

The original Garden Bridge scheme epitomised much of the dysfunctionality of London under Johnson’s mayoralty. Conceived by a small group of influential friends, tendered with scant regard for the rules, careless with public funds and, critically, blurring the lines between public and private space, it was finally dispatched by Sadiq Khan after a devastating report to the mayor by Margaret Hodge in 2017.

Given planning permission in 2014, the contract was recklessly let in 2016 in advance of securing agreement to a key condition, namely that the GLA guarantee the huge costs of ongoing maintenance, estimated at around £3.5m per annum. When the new mayor refused in April 2017, the grotesquely ill-conceived scheme was finally abandoned. Nearly two years later, the cost to the public purse in wasted consultancy fees and cancelled contracts was revealed to have been a staggering £43m.

For all its designer-planting, this would not have been a public space but a private one, not a public right of way but a “permissive” one. There would have been strict controls on activities, regular closures for income-generating events and ticketed entry for groups of more than eight.

The XR intervention on Waterloo Bridge was not only a key part of the Rebellion Week’s programme of mass civil disobedience and disruption; it also served as a riposte to this privatised, corporatised idea of public space.

There have been other dramatic garden interventions in Western cities: for example, the 2010 transformation of the Champs Elysees for International Biodiversity day. But that was official and expensive, with 150,000 plants in 8,000 plots, constructed with the full support of the authorities.

More recently “pop-up parks” have become fashionable badges of green credentials with city councils all over the world. There is nothing to compare to Waterloo Bridge: a public garden space which was unsanctioned, disruptive and illegal.

It was planned and laid out entirely by volunteers on the basis of a materials budget of just £3,000. Mak Gilchrist of the admirable Edible Bus Stop Studio, and a supporter of XR, was asked to take the lead.

After an anonymous donation boosted her budget, she was able to order a grand total of 47 trees ranging from 1.5 metres to 3m in height. XR supporters were also invited to bring along additional shrubs and trees to supplement this framework.

The situation was of course exposed and windswept, although rather than set out the garden in the centre of the bridge a site at the southern end was wisely chosen, with some shelter and also the proximity to public toilets. Mak selected extra-heavy standard specimens of Austrian Pine and Siberian Dogwood trees for instant impact, and a selection of cherry and crab apple trees for blossom and colour.

Installation, being illegal, had to be co-ordinated in secret. On the morning of Monday April 15, a lorry carrying the trees was discreetly parked in a slip road near the southern approach, and once the traffic on the bridge had been stopped, 50 volunteers assisted with carrying the trees into position, four to each tree.

The police, aware of the proposed blockade but not of the garden plans, were not prepared for the sight of trees being marched on to the bridge, and the whole operation was completed before they had stepped in. The flowering trees were placed on the central reservation and protected from being blown over by ropes stretched either side between the lamp posts.

No-one had expected the occupation to last more than a day or two, but over the coming week, the bridge garden evolved in the hands of the hundreds who came to occupy it. As the week evolved and the temperatures rose, Mak came to water the trees daily and she noticed that unknown carers had taken responsibility for watering the plants, along with other routine jobs.

The site grew with more and more plants, tents and gazebos added each day. By the end of the occupation, there was a stage, a skate ramp, a kitchen tent serving hot food round the clock, a yurt, a children’s enclosure, an art space and a recycling centre with other tents providing welcome and wellbeing. Straw bales served as seating. The trees acquired pennants, hand-made plaques and mementos; the tarmac around them decorated with bright graffiti in chalks and chalk spray.

When the police finally moved in on the following Sunday to remove the infrastructure and the last protesters, the trees were carried back to the churchyard at St John’s, Waterloo, where the vicar, the Reverend Giles Goddard, was an enthusiastic supporter. 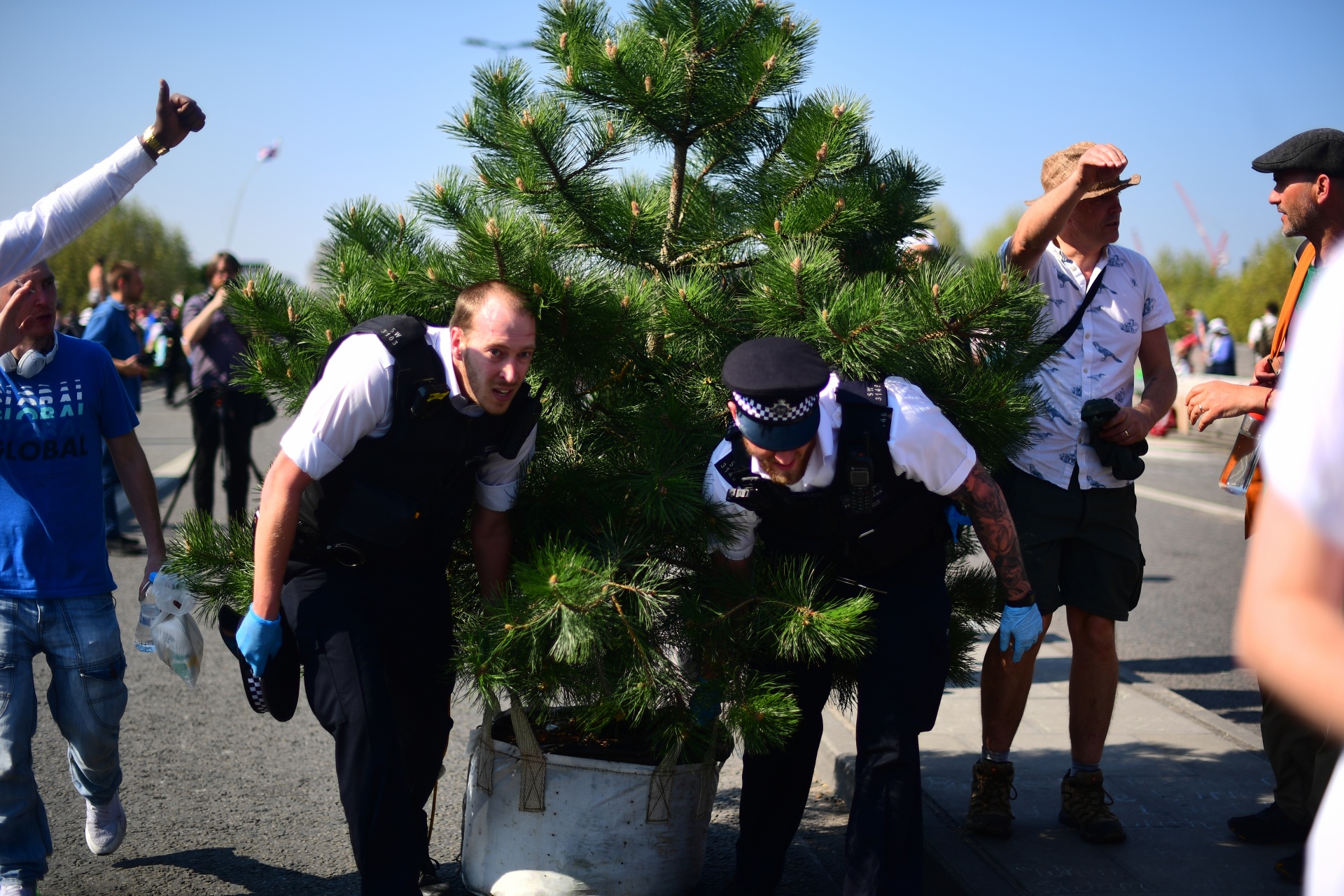 The trees were then taken back to a depot in south London from where they have subsequently been taken and planted in various community gardens around the city, including the Grenfell Commemorative Community Garden, Seed at Hackney Wick and the Martin Luther King Playground in Islington.

During Rebellion Week, pollution levels in the Strand and on the Bridge dropped by between 18 and 30 per cent; and in the afternoons of the Rebellion Week, on some days air pollution levels in central London were down by as much as 45 per cent. Despite the inconvenience to traffic and to weary bus passengers especially, most people appeared to be delighted by the transformation.

Part of the wonder of Waterloo’s unsanctioned garden bridge was that the design was open-ended. People were encouraged to add to it and to take responsibility for it. Remarkably, although perhaps due to the simple “No Drink or Drugs Please” posters, it was almost entirely trouble-free, despite being adjacent to the bars and clubs of the West End on a Bank Holiday weekend.

The sheer weight of numbers of people determined to act decently and with intention made anti-social behaviour impossible. The garden was a beautiful thing to witness, and a huge number of people around the world loved it.

But despite the festive atmosphere, it was designed with a political intention. As Gail Bradbrook, one of the founders of XR, said: “This is a rebellion. It’s fine if people want to have a bit of fun and a bit of a dance, but this is not a free party. What we’re wanting to do is create a political crisis.”

David Lambert runs a small landscape consultancy with a special interest in the conservation of public parks – www.parksagency.co.uk. Since October 2018 he has devoted much of his time to Extinction Rebellion.