‘As I talk to you now, Beirut is burning’

Following the devastating Beirut explosion, the Young Communist League speaks to Union of Lebanese Democratic Youth president ADNAN AL-MOKDAD about his organisation's response and the fast-moving political situation in Lebanon

'On Saturday August 8, perhaps more than 50,000 people took to the streets in protest, occupying two ministerial buildings before the army chased them off. There was also an intention to occupy the parliament building. The government responded to our protest with tear gas and brutality.'
×

ON August 4 an explosion tore apart the Port of Beirut, leaving at least 158 dead, 6,000 injured and 300,000 people homeless according to the BBC. Meanwhile, Lebanon has been experiencing severe economic decline, with over 50,000 people protesting against the government on August 8. The YCL has launched an appeal for donations to fund relief, rescue and rebuilding work by the ULDY as well as support for affected and impoverished people.

ULDY is a progressive, secular, anti-imperialist youth organisation that has been part of the struggle in the region for social and economic progress for more than 30 years.

“Covid-19 has made clear that Lebanon’s purely neoliberal, capitalist and imperialist system of government is not working for the people. The economy is in freefall, with mounting debts to other countries and the collapse of the Lebanese currency. Lebanese pounds now trade for 10,000 to the dollar and black market speculation is rampant.

Most of the business class, especially the retail and service sectors such as restaurants, are out for employees’ blood, cutting salaries by half in order to maintain stability and profits. In the capitalist system, they do not care about the crisis, only about profits.

The black market is making massive profits, because in Lebanon we do not produce anything, we buy it from abroad and the government does not act.

Merchants are using the black market, trebling the price of shovels after the blast and after Covid-19 happened, the price of masks and hand gel trebled too. They are replacing the original expiry dates on Lebanese food with new ones that say it is still good to eat.

For many people, there is no electricity, no water, no medical insurance, no free or affordable medicine or healthcare and the bourgeoisie have even priced us out of education. They are stealing everything from us.

People are losing their jobs and the youth, their futures. The minimum wage for six months’ of work was 600 dollars, now it is 110 dollars and employers are nonetheless telling the workers, here’s 40 dollars, if you don’t like it, leave! There are a million more people like you.

If you asked me for three things that were good about Lebanon, I would tell you that there’s nothing.

However, the more the class struggle becomes chaotic, the more we consider it our duty in the ULDY to replace the government with a system that works.

On Saturday August 8, perhaps more than 50,000 people took to the streets in protest, occupying two ministerial buildings before the army chased them off. There was also an intention to occupy the parliament building. The government responded to our protest with tear gas and brutality.

As I talk to you now, Beirut is burning!

More than 400 people have been wounded in clashes and our comrades are visiting police stations to put pressure on the police to release about 60 political prisoners arrested at the protest.

The regional situation is not positive either, our territories with Syria and Palestine are in a condition of war. Meanwhile there is a blockade by US and Nato ships on the Mediterranean Sea.

In Beirut, garbage is piling up in the streets and after the blast, the government response was nowhere to be found. On the fourth day, they still haven’t turned up to help with the recovery efforts. The government is on the ropes.

So what happened recently and what are we doing about it?

The recent event was a huge explosion and the investigation is not yet clear what caused it. However, the explosive materials were from a ship that was confiscated at the port and had been there for seven years.

After the blast, we sent our comrades in four ambulance teams and six other teams who looked for and rescued people. They cleared the roads, transported the injured in cars and pick-up trucks to hospitals and communicated the whereabouts of people to the Red Cross. A three-mile radius around the explosion was devastated. More than 600 of our members came to Beirut from all 24 regional committees covering the country. They went to the disaster zone to help people.

Our comrades have tried to buy whatever they could, medical supplies, shovels and tools for clearing the roads and to help people, moving rubble. 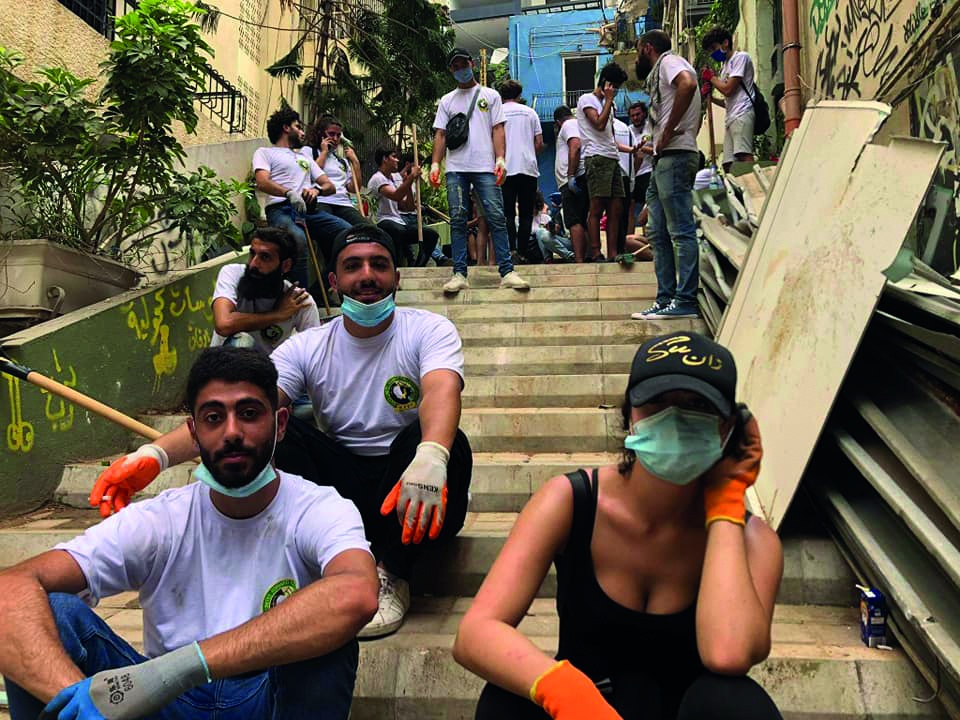 We have started mobilising more people to help in this aid work, buying workwear for our comrades, digging deeper into the rubble and buying things like door locks and plastic sheets to put over the windows of homes that have been affected.

We are also providing essential equipment to the people that need it. For example, food for a poor family for two weeks. The prices of food, essentials and equipment like shovels continue to rise because of the economic situation and black market profiteering.

We are ignoring the big companies who are not helping and going into the poor neighbourhoods to work.

The dire economic straits of our country have been going on for a while now and Lebanon is an expensive country. About two months ago, bakeries doubled the price of bread, so we bought the raw materials and made it ourselves at half the price for people, demonstrating that what the bakeries were doing was extortion.

We are political people. Lebanon needs to change its imperialist system, otherwise the nation will collapse and there will be countless needless deaths, poverty and misery. Ninety per cent of our people are poor and lost their savings due to the economic crisis. Nine per cent are the oligarchy and 1 per cent control all of the financial wealth.

Meanwhile, at the port, 50 per cent of all buildings were destroyed. Our message is we need to change Lebanon and help the poor people of Lebanon now.”

The YCL is asking for £1,000 in donations to fund relief, rescue and rebuilding work as well as support for affected and impoverished people by ULDY — www.gofundme.com/f/ycl-uldy-aid.