Brass bands and banners: in defence of the Durham Miners' Gala

The liberal elite have never had to fight like our communities — that’s why they can’t understand the Gala, writes LAUREN GILMOUR

OVER the last several years, I’ve had the pleasure of attending the Durham Miners’ Gala four times, the largest and one of the oldest events celebrating working-class culture and communities in Europe.

I don’t think this makes me an expert on the matter by any stretch of the imagination, but I know enough about the mining industry and growing up in a working class, deindustrialised community to know that coarsely reducing it to a glorification of the mining industry or indeed, a Corbyn rally, as some liberal commentators would have you believe, is a gross injustice to the working-class communities who keep this event going year after year.

Having grown up in Paisley, a large former textile town on the outskirts of Glasgow, I have seen and continue to experience the impact of communities left behind by the rapid expansion of the banking and service based economy. The weekend before Durham Miners’ Gala, on the first Saturday in July, the people of Paisley take to the streets to watch a celebration of the cultural legacy of its former textile industry. Sma Shot day is a celebration of the textile workers’ victory over their bosses in the 19th century and the proud radical tradition of fighting for better rights and conditions at work.

The celebrations are finished by a burning effigy of a mill owner as a symbol of the oppressive bosses of the 19th century. The conditions in the mills improved throughout the 20th century. My gran was a former mill girl and regularly used to tell me of her generous wage, free canteen and holidays she had too. But, as with most industry across Britain, the textile industry has completely disappeared from Paisley with just a few former mill buildings standing and statues depicting members of the Coats family, who owned many of the town’s mills.

The Durham Miners’ Gala isn’t the only celebration of industrial legacy and the solidarity of working-class communities in Britain, but it is the largest display of working-class solidarity and culture in Europe. The Gala regularly pulls crowds of 100–200,000 people who line the streets of Durham from early in the morning until late in the evening to watch colliery bands marching through the historic town centre, which is entirely closed off to traffic for the majority of the day, and waving bright banners proudly sporting working-class heroes and influences.

Brass bands are an important part of the cultural legacy of working-class Britain. Most collieries in Britain had a brass band attached to it as a way of keeping workers out of trouble, but also to introduce them to culture and to make them ambassadors for the coal industry. The colliery bands were funded by mandatory contributions from miners in every colliery.

However, during the 1980s when Thatcher’s policies of economic liberalisation and the financialisation of the British economy decimated working-class, industrial communities, it was no longer economically viable for many colliery bands to keep going. So along with miners’ welfares, working men’s clubs and labour clubs up and down the country, brass bands disappeared from many communities. There are still some bands who are active today and events like the Durham Miners’ Gala are important to showcase their ability and ensure that the legacy of brass bands is kept alive.

Over the last five years in particular, the Gala has been attracting a younger crowd from all corners of the UK. This is due to a combination of different factors — unions such as Unite and GMB run week-long political schools in the city where young people have the opportunity to learn about the history behind the mining industry and the working-class culture that the Gala celebrates.

They then march with their unions at the Gala and for many, this is their first. In 2015, young activists campaigning for Jeremy Corbyn attended the Gala to hand out leaflets encouraging people to sign up as registered supporters to vote for him, the number with which to do so being proudly printed on a red beermat, many of which still litter the homes of young adults across the UK. For many, this has now become an annual pilgrimage to stand in solidarity to fight for better rights and conditions and work.

It was therefore disappointing to see attacks levelled at Jeremy Corbyn for speaking at this year’s Gala as some kind of celebration of sending men underground to their deaths. If anything, the Gala is a demonstration of the desire for better and safer jobs alongside conditions and rights. 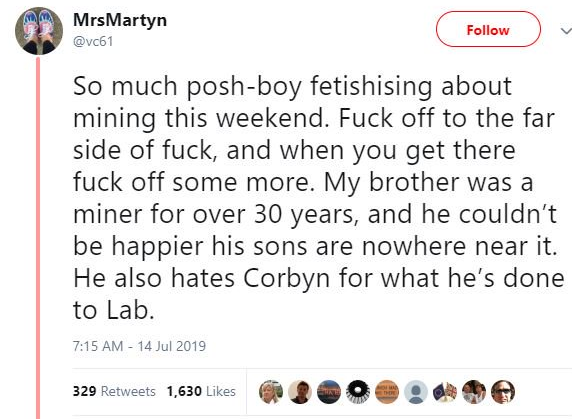 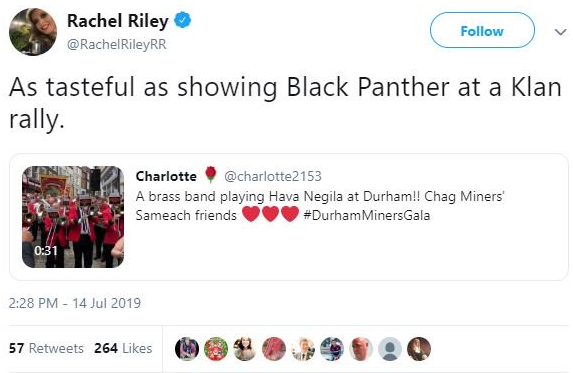 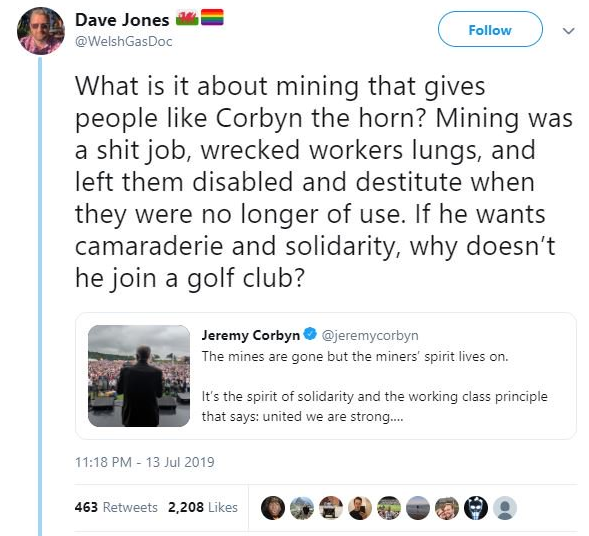 Obviously, little can be gleaned about an individual’s politics from one or two tweets, but there is a uniformity here that clearly shows people of a more centrist or liberal persuasion have no concept of the bigger meaning behind events like Durham Miners’ Gala. The event has been running since 1871. Speakers like Jeremy Corbyn have to be invited by the Durham Miners’ Association.

Most of the crowd watched and cheered for Corbyn enthusiastically. Because the liberal elite have never had to involve themselves in any kind of struggle for their very livelihood, community or way of life, it isn’t a huge surprise that they have a lack of understanding or awareness what events like Durham Miners’ Gala mean to the communities they are held in and the people from across the UK who attend them for the spirit and camaraderie they bring to the movement.

The continuous attack on working-class communities; our rights at work and our material conditions alongside the denigration and condescension of our politics means that events like the Durham Miners’ Gala are more important than ever in order to continue the legacy and culture of mining communities and come together as a movement in solidarity and friendship.

Lauren Gilmour is a trainee teacher and a member of Paisley CLP.