Day X: look for the fighters

As a new cold war gathers momentum, we must remember the last great anti-war movement — the hope, anguish and most of all the rage, writes ALEXANDER NORTON

THE scene outside Parliament was one I’ll never forget: watching a schoolgirl of about 14 run into the road from the main body of the demonstration and a great lump of a policeman just instinctively level her, then surging forth with the rest the crowd, none of us over 17, and seeing an even younger boy — still in school uniform — jab the officer in the eye with a broken placard stick. 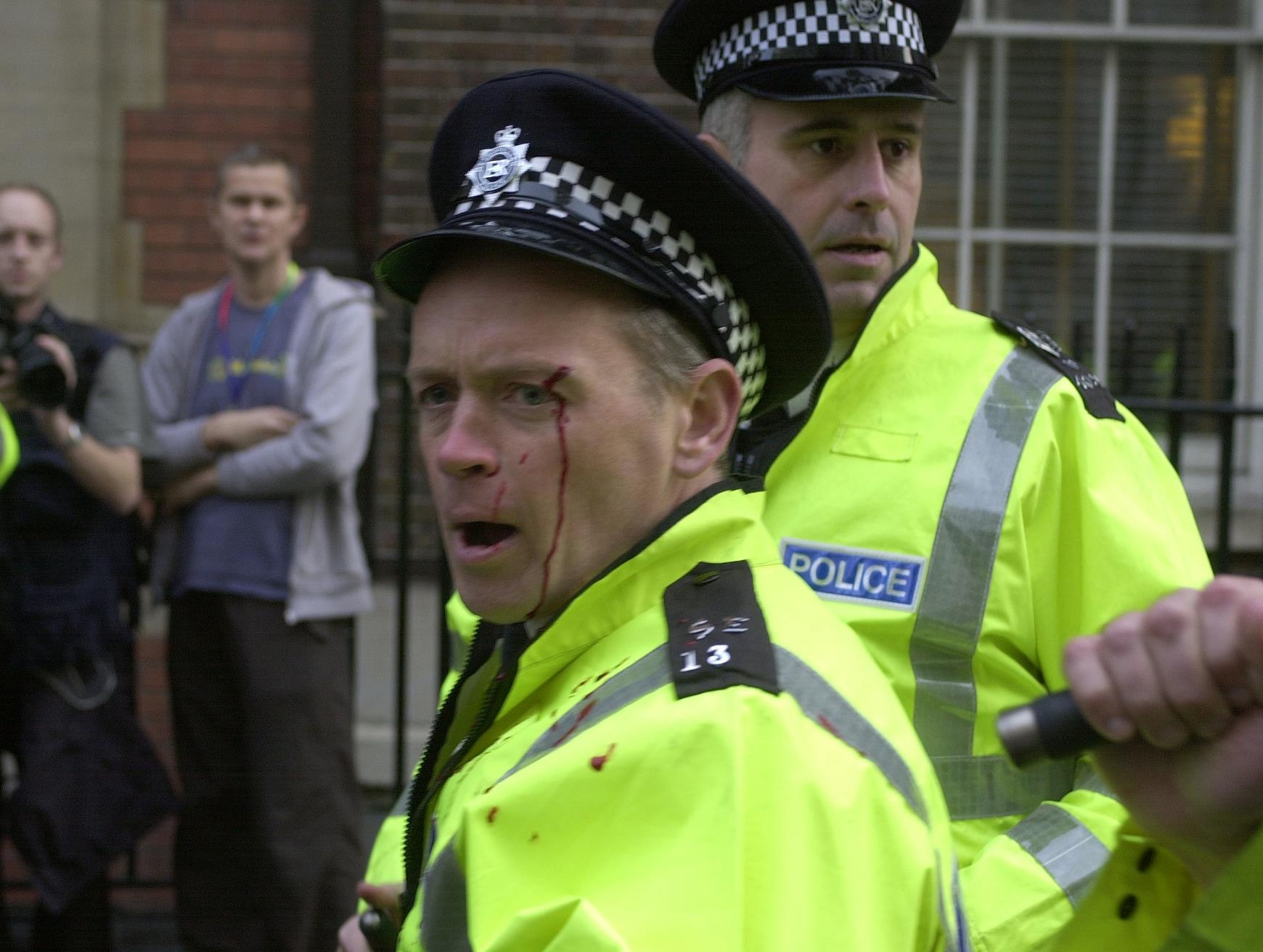 All the hope and awe at the biggest demonstrations the planet had ever known on February 15, when between six and 10 million people took part in protests in up to 60 countries, had evaporated: this was “Day X,” March 20 2003. We had answered the call to leave work or school and take to the city centres as soon as the invasion of Iraq by US and British troops had begun. We hadn’t stopped it.

We would not stop it, and have not to this day stopped “it” — the invasion and occupation of the Middle East by the United States — so the fact our movement would remain known as Stop the War almost taunted me.

For me and my peers, the name seemed to become an immediately nostalgic reference to that one preternatural mid-February day when over a million people had packed the streets of London, a first-hit high that we would chase for most of the next decade, until we would finally go cold turkey on the weekly demos and the rhetorical speeches and just give up — bitterly accepting that this monstrous injustice was simply part of our world now, along with the all the peripheral horror of jihadist bombs in our own streets, buses and concert arenas. 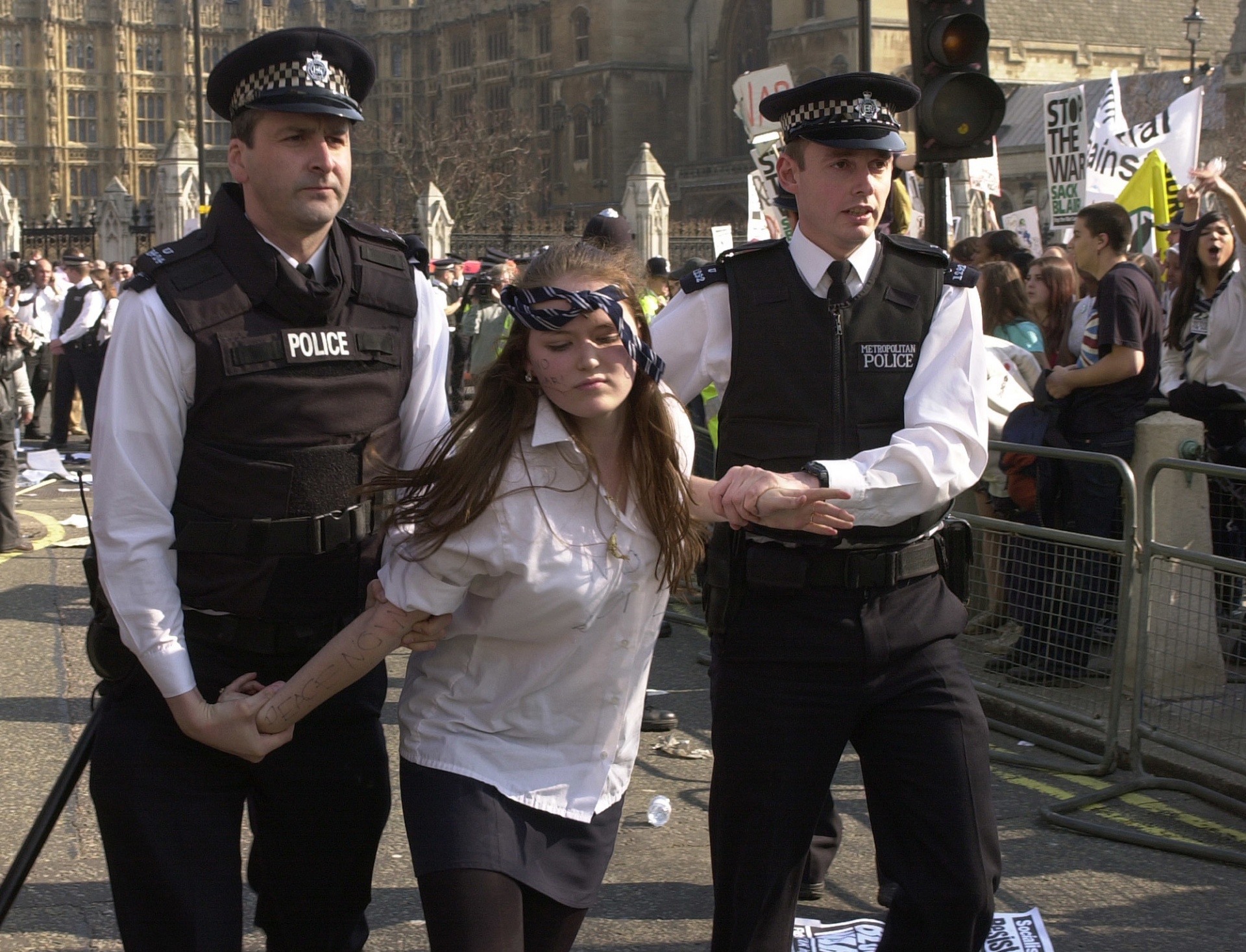 In 2018, there would still be 5,000 US troops in Iraq and an estimated Iraqi death toll of 2.4 million resulting from the 2003 invasion. Yet George W Bush would be welcomed on the Ellen DeGeneres Show as an old friend, a representative of a time when, yes, the US president’s stupidity and bloodlust were world-renowned, but at least he wasn’t — ptuh! — Donald Trump. Tony Blair would be appointed the Middle East peace envoy and work the lecture circuit charging $10,000 a minute for his insights. Yes: Middle East peace envoy. Harold Shipman should run a care home.

It would be ludicrous to suggest that, in Parliament Square on that day, I had any premonition of the despair and bitterness that was in store for anti-war campaigners, but if I could transport later-learned back emotions to 2003, I don’t think it would have made us any angrier.

We were distraught, we were enraged, but London would be proud of its children that day. 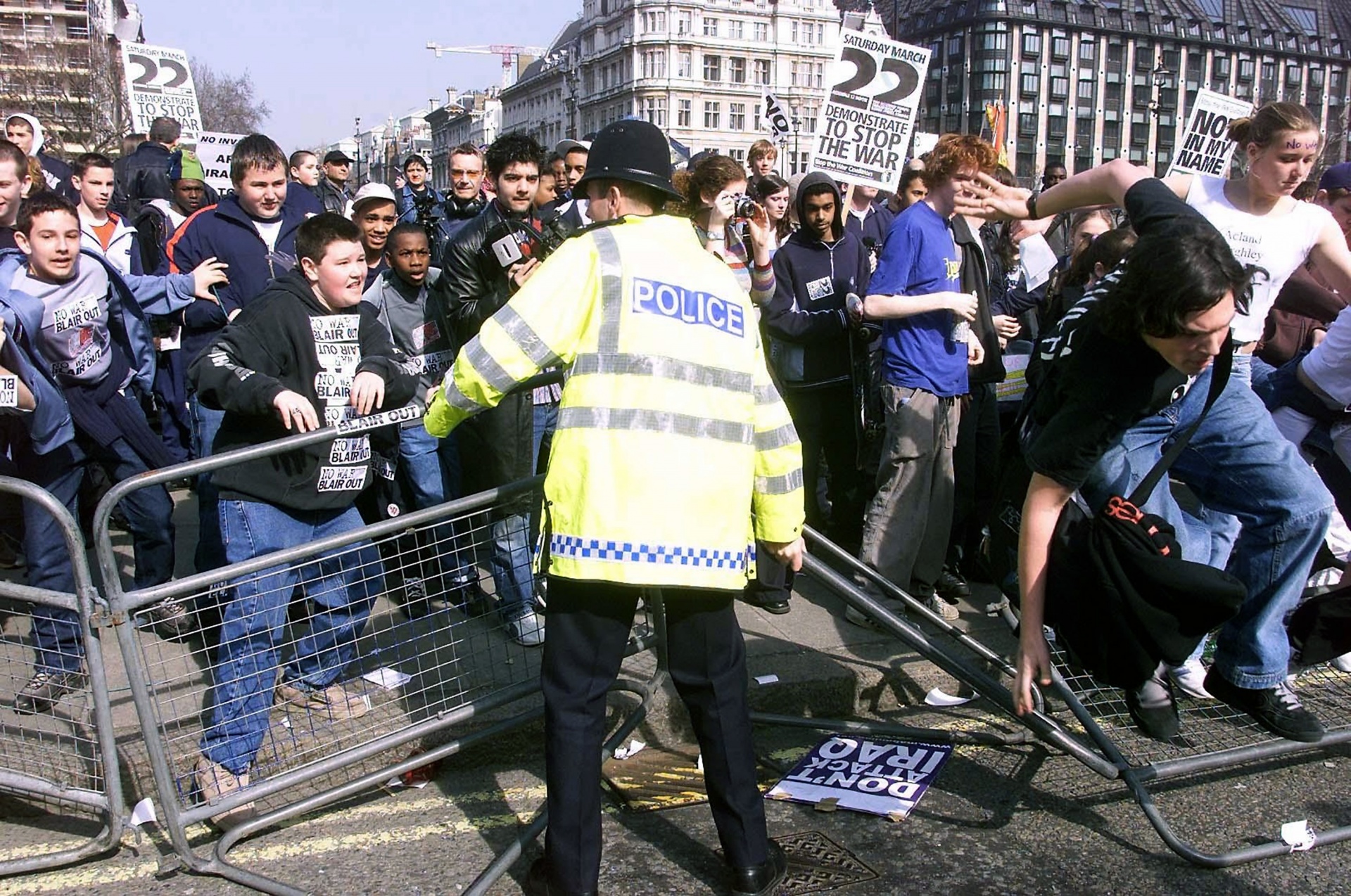 In our last morning class, the teacher gave a wry smile and said: “Copy this reading down for later; I don’t expect many of you to be here this afternoon.” Our college left the gates open when we marched out at midday.

Others fought the student strike and locked their gates — the fire brigade had to be called to point out that this was against the law. Ringleaders were threatened and later suspended in a display of mind-boggling, mortarboard-spinning cane-bending old-school British authoritarianism: “Yes, Derek, the invasion of Iraq may be illegal according to the UN, but you know what else is illegal? Truancy!”

Unlike in the next decade of soul-sapping grudge-match marches, a war of attrition against our ankles and the knowledge of all the other things we could be doing with our Saturdays gnawing away at our souls, when we hit the streets on Day X, marching from schools across London to converge on Westminster, we hit them running — bouncing off each police car and attempted cordon.

There were no bib-wearing stewards telling us to slow down, buy papers and sign petitions for data-scraping Trotskyist groups so gtaht they could call you up the following week and inform you that, according to their records, you had joined the Revolutionary Workers Socialist Fightback Party.

The atmosphere was electric, organic and unmediated.

We arrived early, not having far to march and facing no resistance from our school. For a worrying moment, we thought it would be just us and the less politicised melted away to the lawn of the green to attend to matters green of their own; but there was no time to skin up — across Westminster Bridge came a sea of school uniforms: south London had finally broken out. 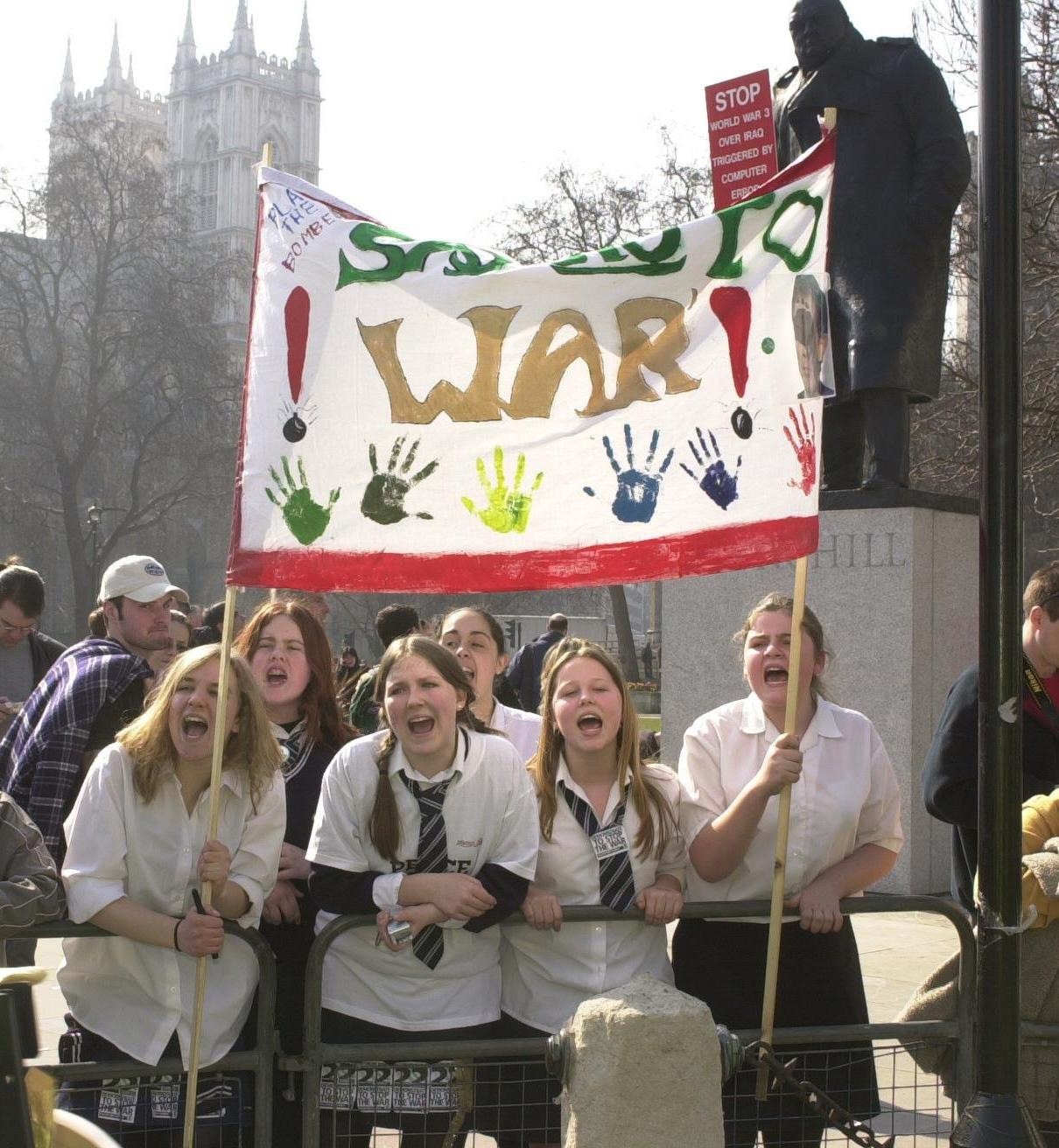 On Whitehall too, other schools had arrived now and, as my friend yelled down the phone while calling for reinforcements, they were “climbing the fucking gates of 10 fucking Downing Street.” Without any directive beyond bunk off school and get to Parliament, with no stage or speakers planned, it was up to us to decide how to “stop the war.”

It was pandemonium and, like the best moments of left-wing politics, it was infectious — I saw a kid who I knew from school to be a right-wing zionist carried away by events, attending to the melee, skirmishing with London’s finest.

I started chalking a Churchill quote that I’d learned in a history class on his statue: “I am strongly in favour of using poisoned gas against uncivilised tribes.” The long arm of the law gripped me firmly and I was carried in cuffs to the back of a police van. For me, the day’s battle was over, though the war had begun. 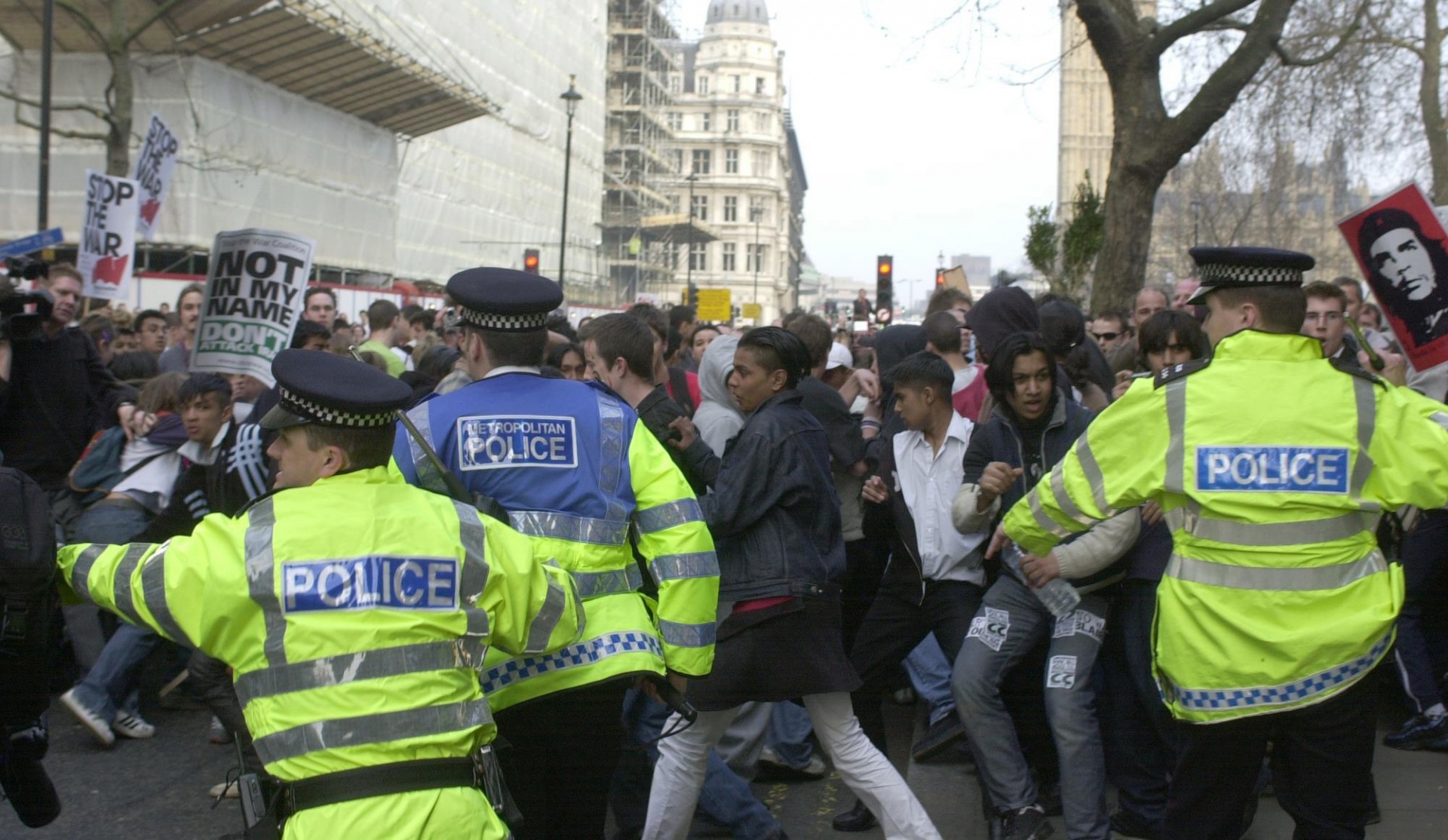 It was the first time I’d seen London’s youth in full cry, but it wouldn’t be the last. We were back again in 2004, the night university top-up fees were first announced, and I went home with a classic conical “tit-head” Victorian police helmet that my dad would discover and throw away in a panic, then back again for the 2010 student rebellion against the introduction of £9,000-a year tuition fees and the abolition of the education maintenance allowance, to which Day X pales in comparison. We also saw it last month, when Black Lives Matter kids took on the Met on Whitehall once more with flares and fireworks, in solidarity with the uprising in the US.

Tomorrow’s youth won’t even know about February 15, let alone Day X, unless we tell them. Generations of new rebels need to stand on the ground already soaked in each past generation’s fury. Strike now for black lives, for the climate — but strike too for Iraq, Afghanistan, Vietnam, Korea — strike so that it wasn’t all in vain.

US television icon Fred Rogers famously claimed: “When I was a boy and I would see scary things in the news, my mother would say to me: ‘Look for the helpers. You will always find people who are helping’.”

We must tell the children: look for the fighters. Look at every injustice or crime against the people, look closely and you will always find people fighting and dying to stop it. That will be you one day. Until the war is over.

Alexander Norton is deputy features editor at the Morning Star. 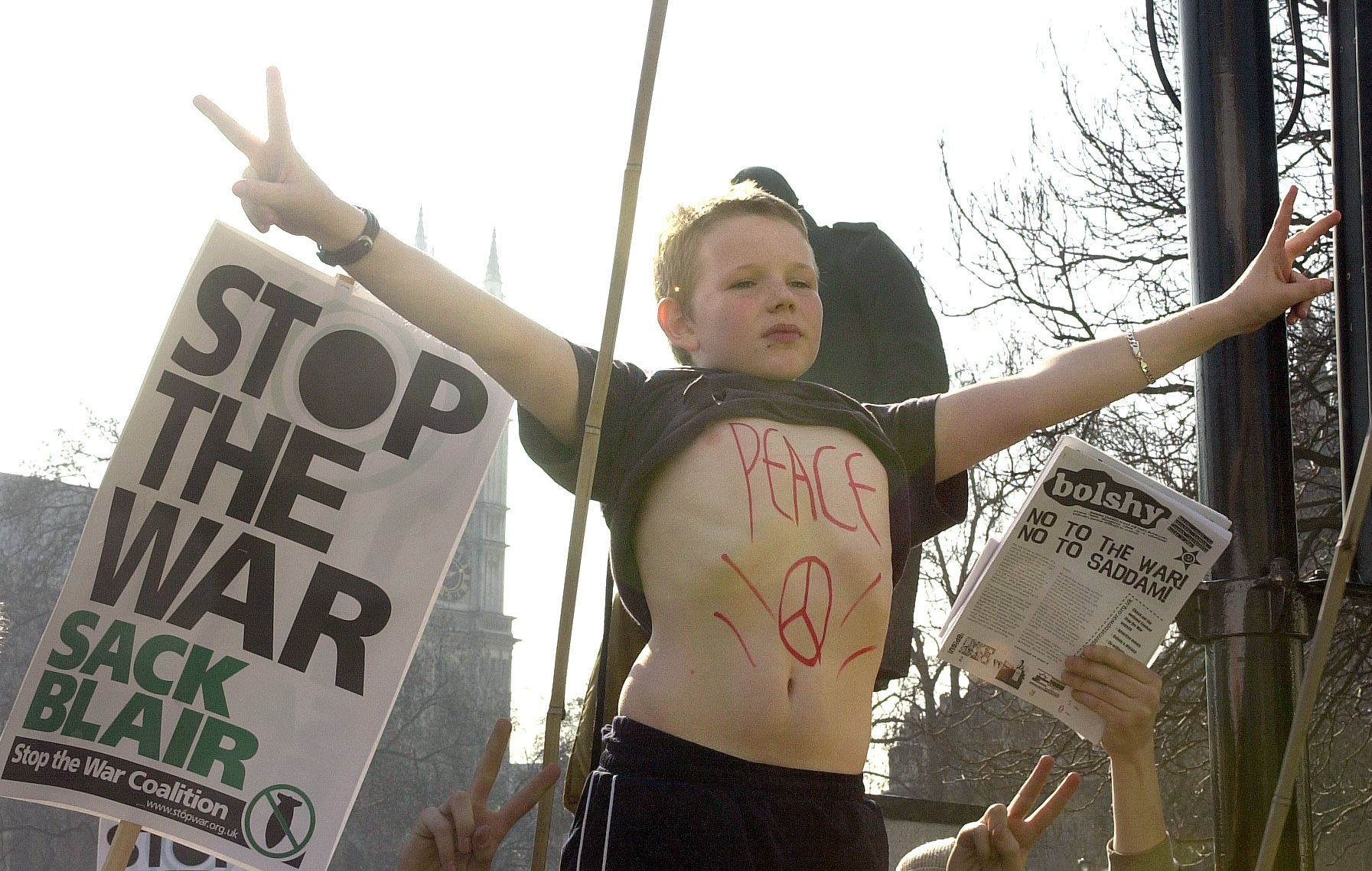