Can ‘deplatforming’ the far right work?

ROANNA TAYLOR argues that removing the hatemongers from YouTube and Facebook has been a success — should Telegram and other platforms be next?

Tommy Robinson went from an audience of over a million people on mainstream channels to just over 35,000 followers on Telegram
×

IT HAS become a widespread reaction to label anti-hate activists and those who stand against prejudice “politically correct.” Given the examples of racism paraded with sensationalist headline-grabbing horror by the press, this is perhaps not surprising.

Only last week we watched mainstream media tie itself up in knots wondering if Marks and Spencer’s bra colours are making a covert racial statement while Tesco shoppers vowed to boycott the supermarket in retaliation for sales of a child’s T shirt depicting a pretty black mermaid whose hair was apparently “too fluffy.”

Headlines like this do nothing to tackle the growing problem of racism and hate in our country. If anything they actually turn people away from tackling genuine issues of inequality and prejudice. While the focus is on this nonsense the real racists are busy spewing their bile to the young and the vulnerable in an attempt to recruit and radicalise more people to their extremist way of thinking.

The problem is that racism, “proper” racism, has gone underground. When the big social media platforms like Twitter and Facebook wised up to the fact that they were becoming recruitment grounds for the radical right, the extremists set up home on a series of less regulated, hate-friendly alternative platforms.

Racists and the like-minded followed Milo Yiannopoulis to Telegram, Tommy Robinson to the Russian site VK and Katie Hopkins to Parler. Nazi group Patriotic Alternative adopted the streaming site DLive while the video upload site Bitchute became the go to place for all the bigots kicked off Youtube.

In some ways this is a good thing. Our anti-hate organisation Resisting Hate has long focused on the deplatforming of hate. Removal from Telegram, Twitter and Youtube hurts even the most high profile of haters.

Tommy Robinson is a prime example of this. He was preaching his Islamophobia to over a million people on mainstream channels. Deplatforming has left him with just over 35,000 followers on Telegram. He (and others) are left mostly preaching to the converted in online echo chambers.

However there is a serious downside to the echo chambers of hate being away from the glare of the mainstream.

Unchecked, the extremism has flourished like a weed, creating a counter culture of which the Tesco boycotters and the indignant Marks and Spencer’s bra brigade are likely in total ignorance of. These alternative platforms are used to promote racial hatred, genocide, Holocaust denial and every imaginable evil of which our fellow human beings are capable.

Alternative media is used to recruit the easily led. Once inside the propaganda machine they are exposed to a diet of hatred, lies and conspiracy theories. They have hatred drilled into them. Radicalisation can occur over a very short period of time.

I'm calling for social media apps that refuse to self regulate by tackling hate speech on their platforms to be removed from Google and Apple app stores and as a last resort to be ISP blocked in the UK. In the wake of the Christchurch massacre New Zealand was able to ban sites like 4chan at ISP level for failing to remove videos of the shooting. From a technological point of view it is very straightforward.

We know extremists are promoting racism and hatred.

We know extremists are body shaming, putting the health of young people at risk: 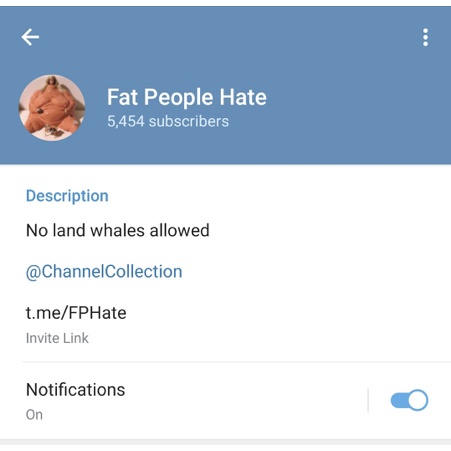 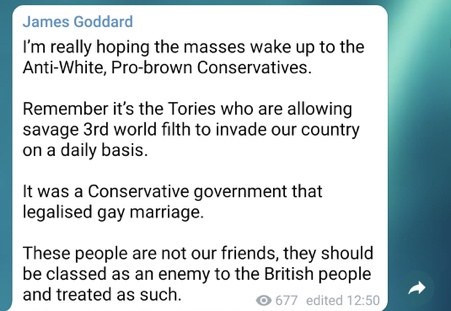 We know dangerous lies about coronavirus are being shared: 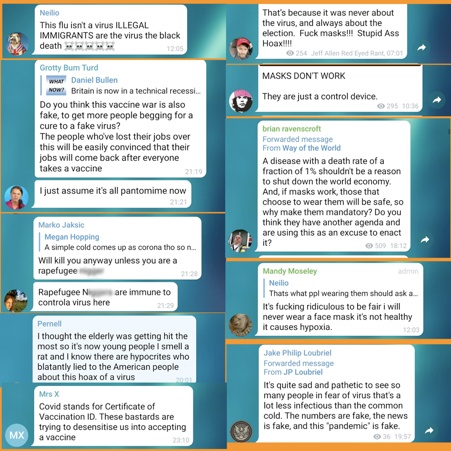 At their most extreme (ed: some images withheld) we know extremists are using alternative media platforms to teach false history — especially regarding the Holocaust, promote hatred of Jews, Muslims, LGBT and disabled people — and to promote violence.

In short, we know that extremists are using alternative social media to recruit, brainwash and radicalise young people into their hateful world view.

The screenshots I have provided here (all genuine extracts from public chat rooms on Telegram) show the real face of hate in the modern world. As an anti-hate activist it frustrates me greatly that Marks and Spencer bras make the headlines but calls to lynch, torture and murder black people go unreported. It frustrates me that there is so little education offered to parents about sites that can easily be accessed by kids.

Extremism only needs to recruit so many before it can turn the tables back and go mainstream. In this current climate with the economy in free fall,  a Prime Minister with a history of racist comments, an approaching recession, the most badly funded public services in living memory and the last 10 years of Tory austerity destroying the lives of many, discontent is a fertile field for those who seek to exploit it to promote their agenda of hatred and abuse.

Instead of whining about bra colours I want to see the press tackling the real issues. I want better awareness of the filth festering on alternative platforms. I want to see these platforms regulated, banned or shut down. I want to see Google and Apple taking action, ISPs stepping up to the challenge and the media shaming known racists and the radical far right.

We can start worrying about fluffy haired mermaids when we’ve succeeded in building a hate-free society. Until then, we have a lot of work to do.

Roanna Taylor is a member of the Resisting Hate monitoring group: www.resistinghate.org.