FIDEL CASTRO would have been 93 years old yesterday, but many celebrations took place in Cuba and around the world to honour the man who stood steadfast against the US’s continuing 60-year economic blockade, attempts to overthrow the Cuban government in the 1961 Bay of Pigs invasion, and many CIA-backed assassination attempts. 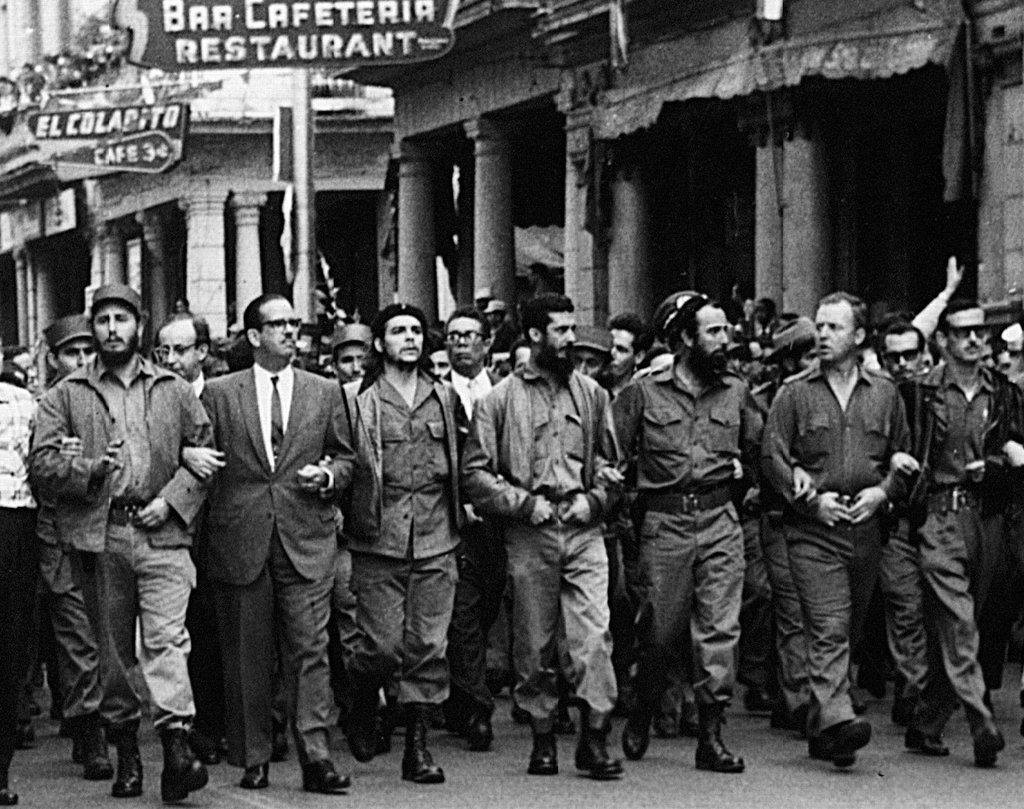 Fidel Castro (far left), Che Guevara (centre), and other leading revolutionaries marching through the streets in protest over the La Coubre explosion, 5 March 1960

Cuba’s example of socialism is a beacon to the rest of the world, demonstrating against the odds that it is possible to build a sustainable economy, provide world-class healthcare, while maintaining an internationalist perspective exemplified by Cuba’s legendary medical brigades.

It is one of Fidel Castro’s enduring legacies due to Che Guevara’s medical training and passionate internationalism, committing them to sending medical brigades all over the world to the poorest countries after natural disasters such as hurricanes, earthquakes or outbreaks of killer diseases such as Ebola.

Established in 1999 and operated by the Cuban government, ELAM has been described as possibly being the largest medical school in the world by enrollment, with approximately 19,550 students from 110 countries reported enrolled since 2013.

All those enrolled are international students from outside Cuba and mainly come from Latin America and the Caribbean as well as Africa and Asia. Tuition, accommodation and board are free, and a small stipend is provided for students. To date ELAM has graduated 31,000 medical students from 103 countries.

ELAM students come from the poorest communities with the intent of returning to practice in those areas in their countries. Initially only enrolling students from Latin America and the Caribbean, the school has become open to applicants from impoverished and/or medically underserved areas in the United States and Africa. As part of Cuban international co-operation, ELAM is also training 800 medical doctors from Timor-Leste.

In all more than 11,000 people died in the resulting floods and mudslides. In response 500 full medical scholarships per year for the next decade were offered by the Cuban government to students from four countries — the Dominican Republic, Haiti, Honduras and Nicaragua — seriously affected by the hurricanes.

The first class of 1,498 ELAM doctors graduated on August 20, 2005, with 112 from other Cuban medical schools: 28 other countries in Latin America, the Caribbean, and the United States were represented by the graduates.

The ceremony was led by Castro and Venezuelan President Hugo Chavez. In June 2000, a US Congressional Black Caucus (CBC) delegation visited Cuba to meet with Castro. Representative Bennie Thompson mentioned to Castro that his district had a shortage of doctors; he responded by offering full scholarships for US nationals from Mississippi at ELAM.

Later that same June, in a Washington, DC meeting with the CBC, the Cuban Minister of Public Health expanded the offer to all districts represented by the CBC.

At a September 2000 speech event at Riverside Church, New York City, Castro publicly announced a further expanded offer which was reported as allowing several hundred places at ELAM for medical students from low-income communities from any part of the US.

Reports of the size of this offer varied in the US press: 250 or 500 places were suggested with perhaps half reserved for African-Americans and half for Hispanics and Native Americans.

The ELAM offer to US students was classified as a “cultural exchange” programme by the US State Department to avoid the restrictions of the US embargo against Cuba. The first intake of US students into ELAM occurred in spring 2001, with 10 enrolling in the pre-medical program.

A cruel irony that Cuba, a poor country suffering under a US economic blockade lasting nearly 60 years, actually trains students from the US to go back to the poorest communities there and help those in need who cannot afford private healthcare.

Steven Walker is the author of Fidel Castro: From Infant to Icon.