Frosty’s year in the country

THE term climate change might have replaced global warming but there is no doubt that the globe is getting warmer. Forest fires everywhere, but particularly in Australia, are just one sign.

I started 2020 as I do most years with a visit to the Fens, to Welney on the Ouse Washes. Every year thousands of swans fly here from the Arctic.

Not this year: those Russian swans only got as far as Estonia on their flight South for somewhere warm enough to spend the winter. Once they got to Estonia they decided that it was quite warm enough and there stayed.

Cranes get a lift for life

What was seen on the Ouse Washes at Welney this year has been the common or Eurasian crane (Grus grus). This is one of Europe’s largest birds, four foot six tall and with a wingspan of up to seven feet. Cranes are tall and gangly but beautiful birds with a loud trumpeting call. They have a spectacular courtship dance. 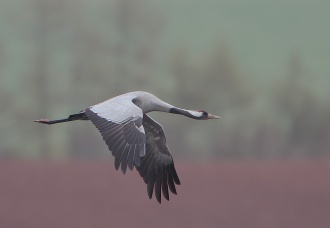 Once common across the fens and wetlands of East Anglia before hunting and land drainage wiped them out, cranes made a natural return to the UK in the late 1970s, and the first fledged chick for four hundred years was seen in the Norfolk Broads in 1982.

Conservation groups like the RSPB and the Wildfowl and Wetlands Trust are working together to re-introduce a viable breeding population at suitable sites all across the UK, securing the crane’s future as a British breeding bird again.

Kites fly over the River Nene

There is a vast difference between keeping out invasive species that never lived in our countryside and are a danger to it and re-introducing species that used to be British natives but became extinct often because of what we did to them and their habitat. 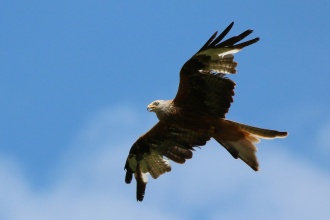 On a boat trip on the River Nene on the hottest day of summer last year I had some amazing sightings of red kites (Milvus milvus). These huge (almost six-foot wingspan) birds of prey were once common. They pecked the eyes out of murderers’ heads displayed on spikes on Old London Bridge in the 1450s.

On our trip we had many large raptors circling our silent electric boat. We had remarkable aerial displays from three buzzards and a kite and later by three kites and a single buzzard.

The bright sunlight and a very low fly-past from one bird confirmed something that should be obvious: red kites really are a quite bright chestnut red. We saw one kite take a bird on the wing, a rare sight indeed, only to have its prize stolen from its beak by a noisy crow half its size.

The red kite is one of conservation’s best success stories. In the past the rarity of the bird made it a prime target for egg collectors who robbed up to a quarter of nests each year.

By the 1980s the red kite was one of only three globally threatened species in the UK: almost extinct in England and Scotland, only a few birds hung on in Wales. It became apparent that they would be unlikely to spread out of Wales into England or Scotland.

In 1986 plans were laid for re-introduction. It was not an easy decision as strict criteria had to be met, but starting in 1989 nearly a hundred birds of Swedish and Spanish origin were released at a number of sites in Scotland and England. More re-introductions would follow.

Kites had started breeding by 1992, and two years later kites reared in the wild themselves reared young for the first time. Now kites fill the skies in many locations, and what was once a very rare bird is now a spectacular part of nature in our skies. 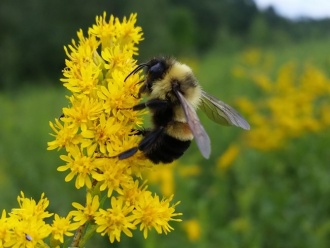 The Labour Council in Brent has built a bee corridor. Nearly two dozen wildflower meadows have been sown, linking some of the borough’s best-loved parks and open spaces.

I have written much in these columns about the huge drop in the number of pollinating insects across the UK since the 1980s. The loss of wild habitats has played a large part in this, with more than 97 per cent of the UK’s wildflower meadows disappearing since the Second World War. Bees, butterflies, damsel and dragonflies and moths rely on these flowers to thrive. 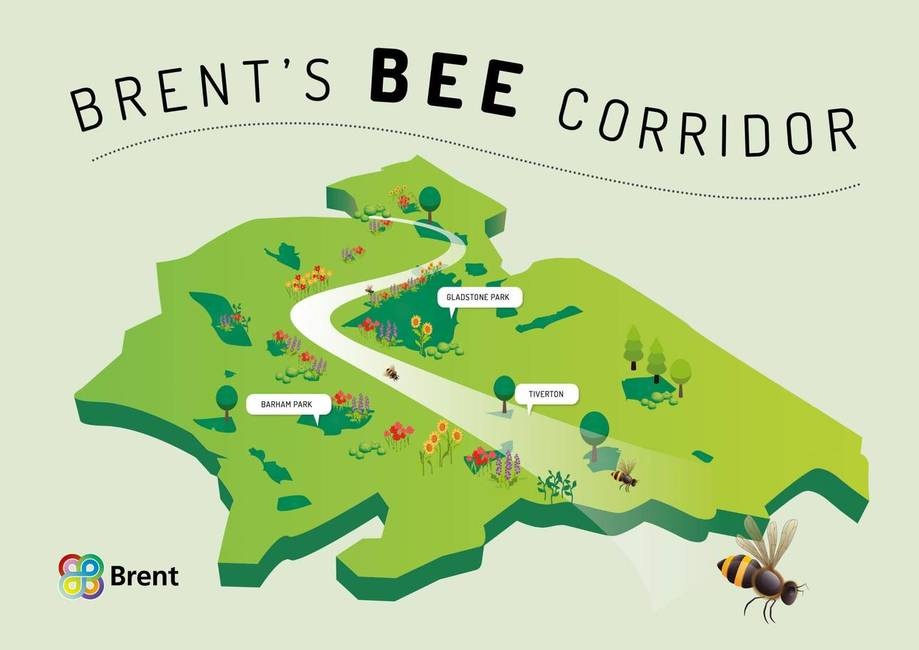 So it is great to see Brent Council creating a number of urban meadows which together form a bee corridor across the borough. The adjoining plots have been seeded with bee-friendly plants like ragged robin, cowslip and common poppy to encourage more visits from not just bees, but many other pollinating insects.

As well as benefiting bees, the urban meadows will bring a burst of colour and the buzzing hum of a sunny day to Brent for everybody to enjoy this summer.

Councillor Krupa Sheth, the lead member for the environment, told us: “Bees and other insects are so important for pollinating the crops that provide the food that we eat. We must do all we can to help them to thrive.

Another great initiative from Brent’s Labour council is to experiment with replacing the plastic bags used to line street litter bins with biodegradable bags made from potato peel and corn.

20,000 plastic-free bags will be introduced as part of a two-month trial, saving 120 kilos of plastic. Not only are the bags biodegradable, they are also more sustainable to produce, using 72 per cent less carbon than plastic equivalents. 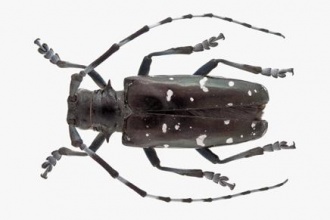 In Paddock Wood, Kent, in 2012 a new and incredibly dangerous migrant was spotted. It was the Asian Longhorn beetle (Anoplophora Glabripennis),   believed to have arrived in wooden packing cases.

The danger to many species of our native trees could not be overestimated. The larvae tunnel into a tree trunk or branches and then eat the tree almost invisibly from inside. The tree shows no sign of the attack until it is too late. In areas of North America and Europe the beetle has destroyed vast swathes of mixed woodland.

Once the beetle was spotted in Kent a rapid programme of eradication was put in place, with 1,500 trees of different species in a one-and-a-quarter-mile radius cut down.

Seven years on annual surveys indicate that that prompt, if drastic, action was successful. The Asian Longhorn beetle has been eradicated and our woodlands safe from this pest at least — but only if we remain vigilant against such non-native species which, like the elm bark beetle which spread Dutch Elm Disease, can change our beautiful countryside forever.

On my Nene river trip I saw lots of damselflies and their bigger and more aggressive relations, the dragonfly. This isn’t the space to explain all the differences but I did observe that many of the smaller beasts perished in the jaws of the latter. So it seems in real life, not just in fairy stories, the dragon often does get to kill and eat the damsel in distress. 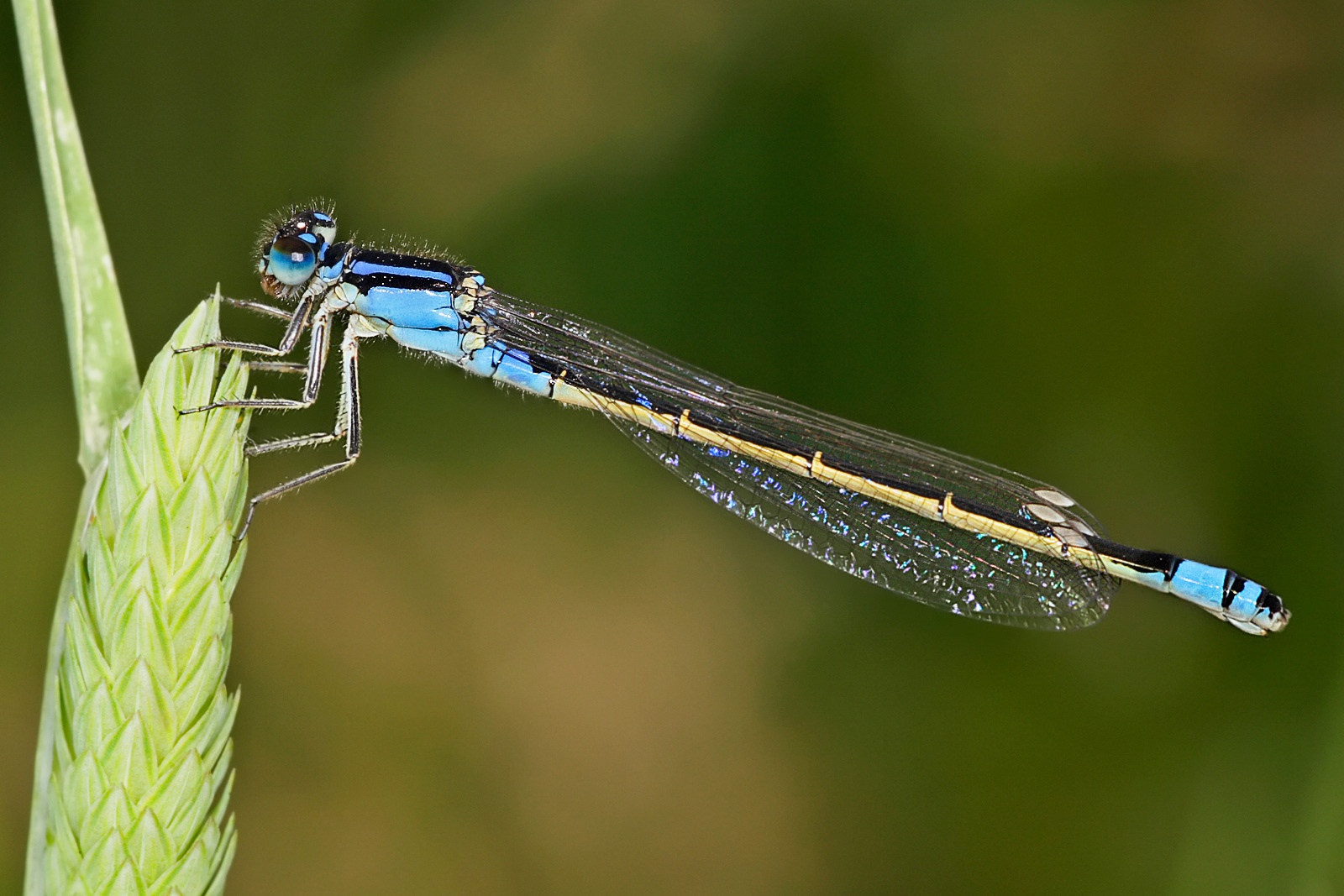 We failed in our duty to equality and liberation

Russia gets private doping hearing due to disagreement 'between all parties'

Welsh star ‘won't be rushed’ back after sickening head injury