FROSTY’S RAMBLINGS Hooked-nose sea pig it may be, but its pups are cute, cute, cute and doing well

We have had a record number of over 4,000 grey seal pups at Blakeney in north Norfolk, says PETER FROST

OK, welcome to another Frosty’s Ramblings. You know how they go. I introduce you to a lovable animal, let’s say a hedgehog. I describe it and then tell you it has declined by over 95 per cent since the war.

Or I might introduce a bird of prey, describe its fine plumage and its amazing acrobatic flight pattern. Then I’ll tell you that gamekeepers are illegally poisoning, trapping and even shooting that particular raptor to the point of extinction. 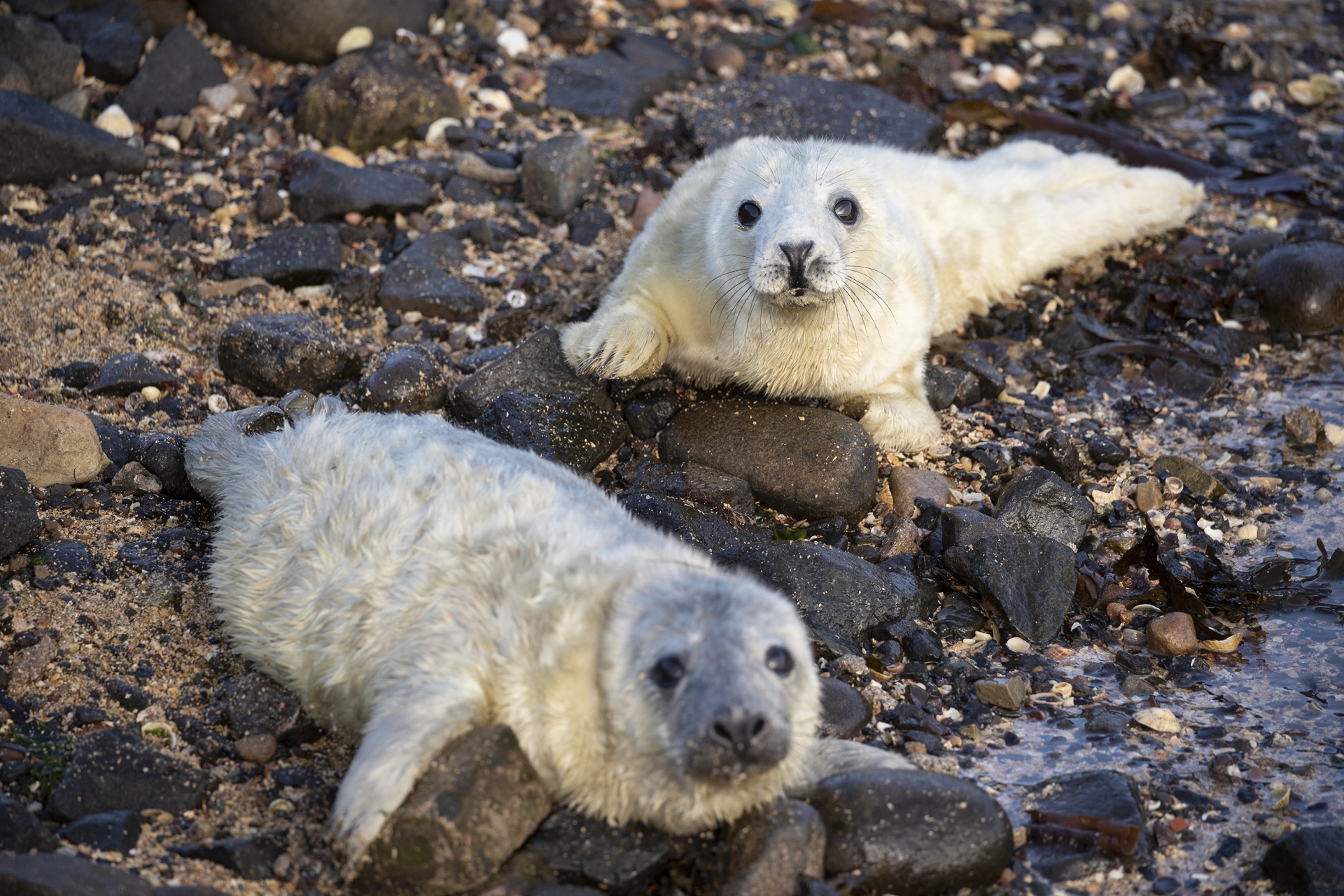 Not this week. This week we’ll be looking at the amazing success of the Atlantic grey seal (Halichoerus grypus).

That Latin name translates rather rudely as “hook-nosed sea pig.”

A close look at a grey seal face-to-face will show you that the name may be insulting, but is spot-on accurate. 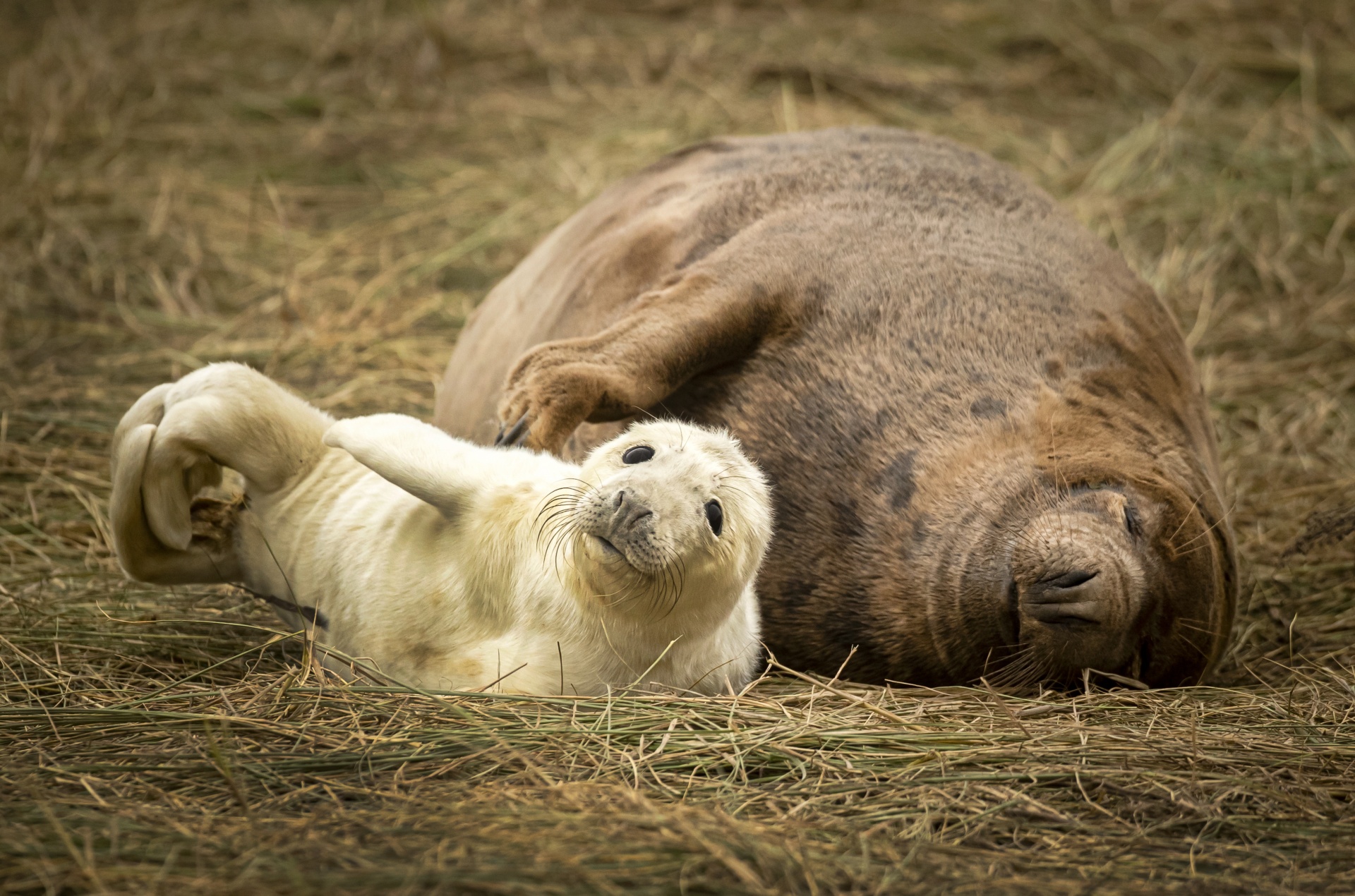 Ugly the grey seal may be, but that doesn’t stop it being a really successful species, breeding in really impressive numbers all around the British coast.

It is a species whose British numbers dropped to only 500 in the early 20th century, but now it’s estimated that there are almost 120,000 of them breeding all around the coast.

That is almost half of the entire world’s population. Many British beaches have recorded record numbers of grey-seal pups born in the last few months.

The largest breeding colony and my own favourite beach to see the seals and their pups is Blakeney Point in north Norfolk.

In 2001 just 25 pups were born at Blakeney Point, but this year more than 4,000 have been counted – a huge increase on last year’s total.

Another great seal-breeding colony is Horsey Beach nestled in the Broads National Park. 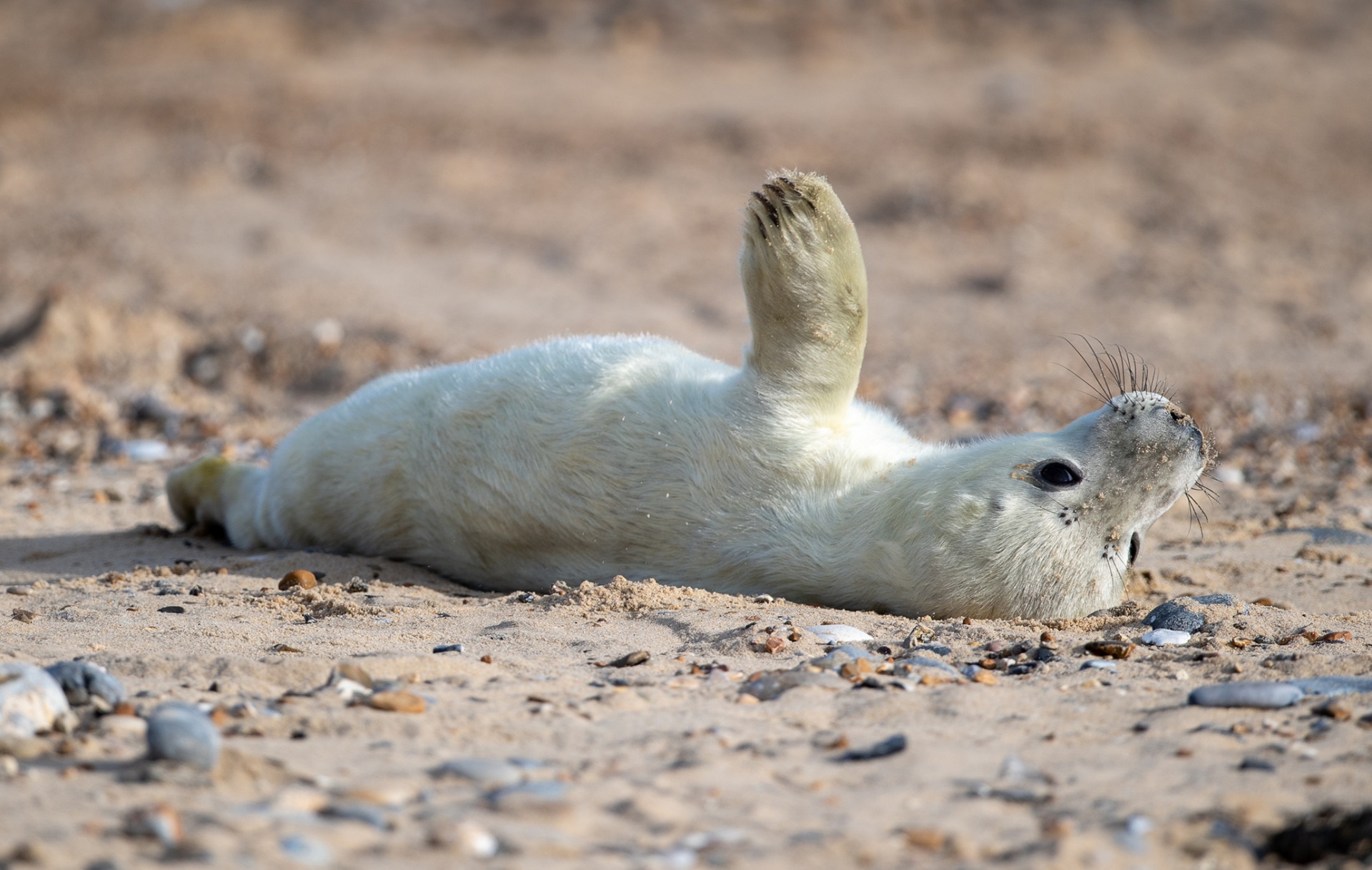 At Horsey 2,069 pups were born this season — also a large increase on the previous year.

There are two species of seal in Britain, the common or harbour and the Atlantic grey.

The common seal is far from common with only about 34,000 living in Britain. As its name suggests, it is often seen swimming in harbours among fishing boats and begging for waste fish scraps.

The grey seal is the larger of the two British species and far more common. It is distinguished from the common seal by its larger size and longer head with a sloping Roman nose.

Looking straight on, their nostrils are parallel, rather than V-shaped as in common seals.

Mainly grey in colour, the unique pattern of darker blotches and spots can be used to identify individuals. 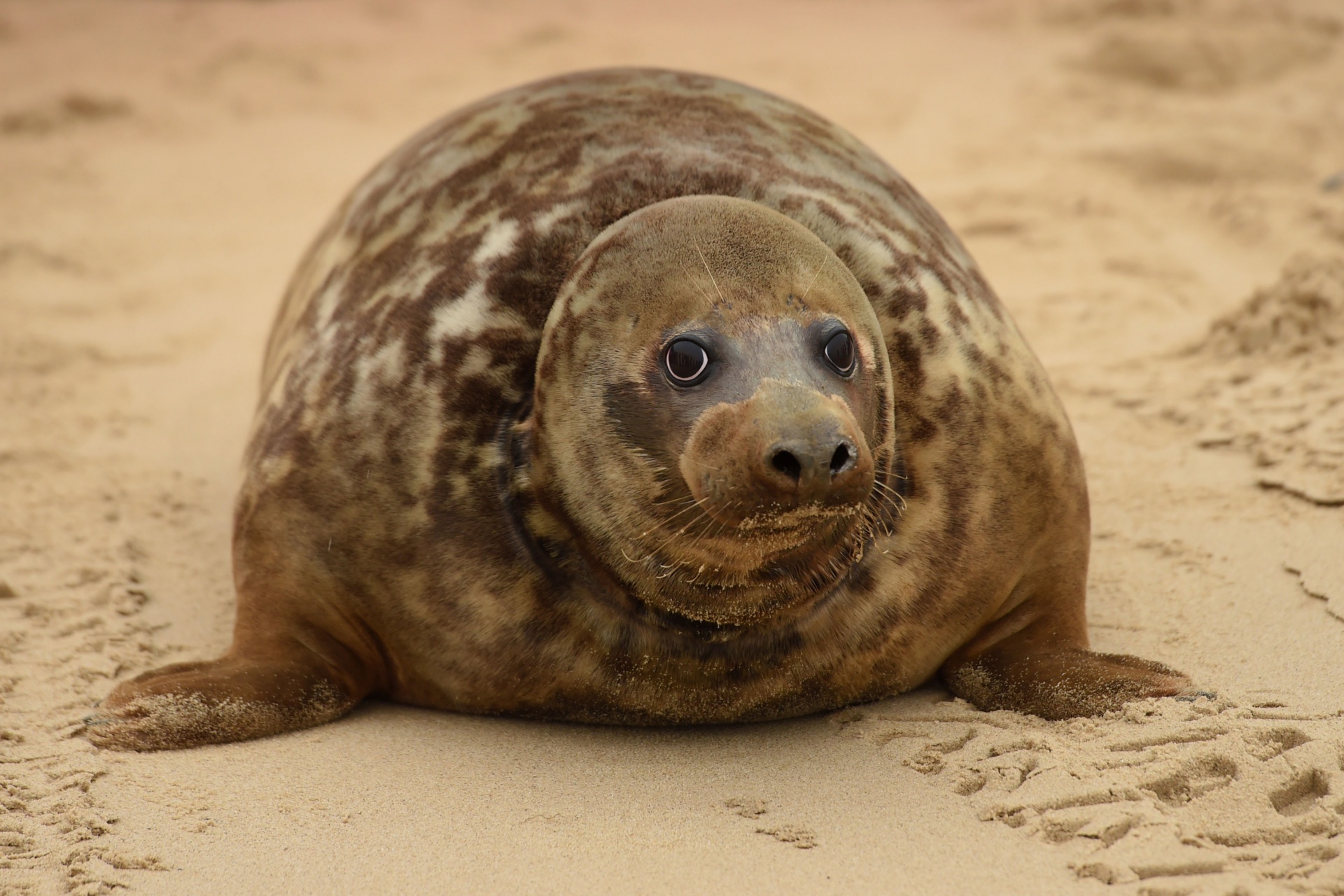 These mammals spend most of their time out at sea feeding on fish. For most of the year, grey seals spend their time in the ocean following the silver darlings — the shoals of herring — as the fish swim up to Scotland and Iceland and back.

They return to land to rest and are often seen hauled out, lying on British beaches.

Grey seals give birth to fluffy white pups in the autumn and winter, between October and January.

These really cute fluffy snow-white pups stay on land until they have lost their white coats and trebled their body weight. 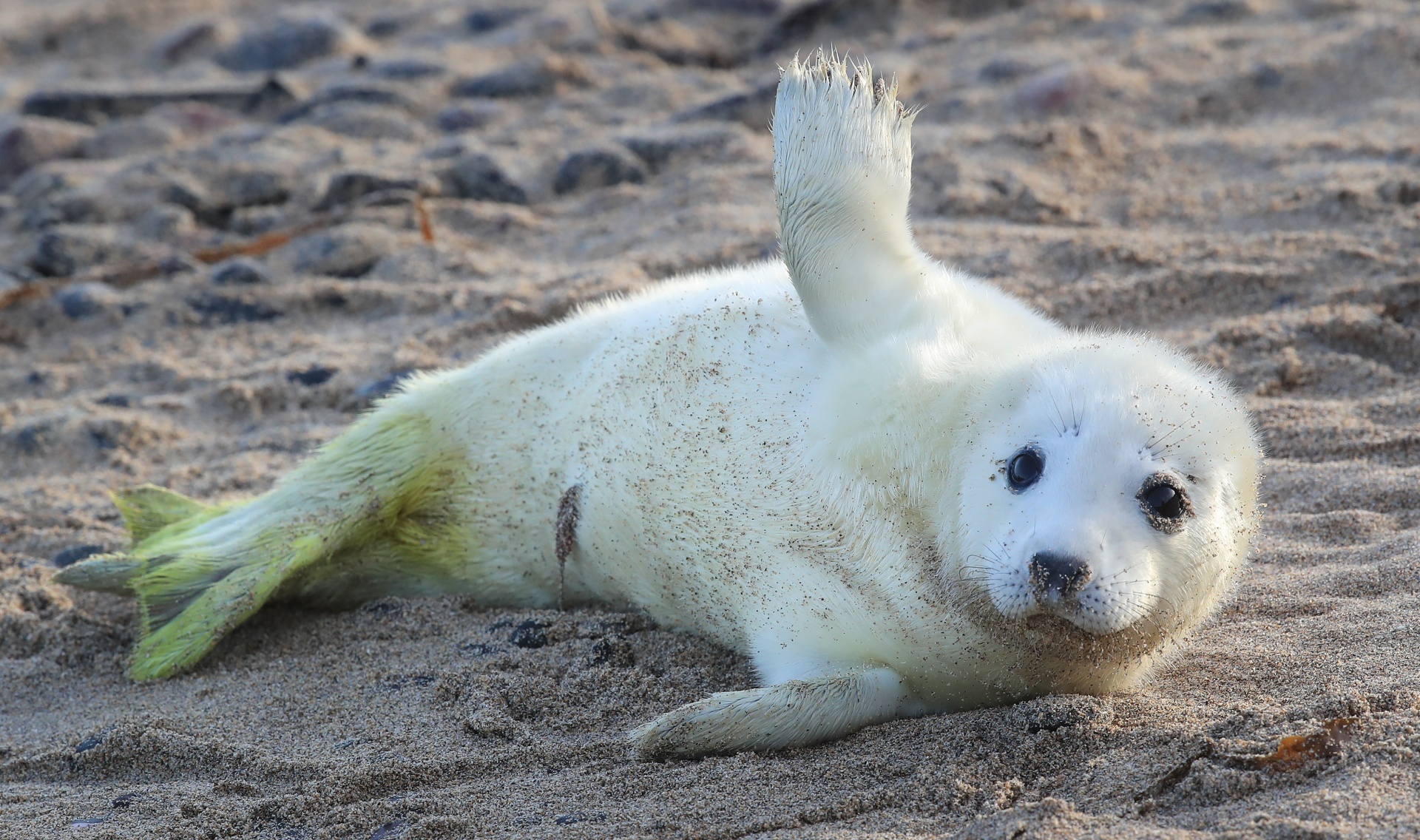 By then they are ready to head out to sea to fend and fish for themselves.

Grey seal numbers are increasing all along our coasts.

Here are recent figures for the number of grey seal pups born on Donna Nook in Lincolnshire.

The sands here are still used by the RAF for bomber practice — watch out for the red flags that warn the bombers are coming – but that doesn’t stop it being one of the best grey-seal beaches on our coast.

Lincolnshire Wildlife Trust, which supervises the seal beach at Donna Nook, took the decision to close the seal-viewing area on November 5 in line with the government’s second lockdown. 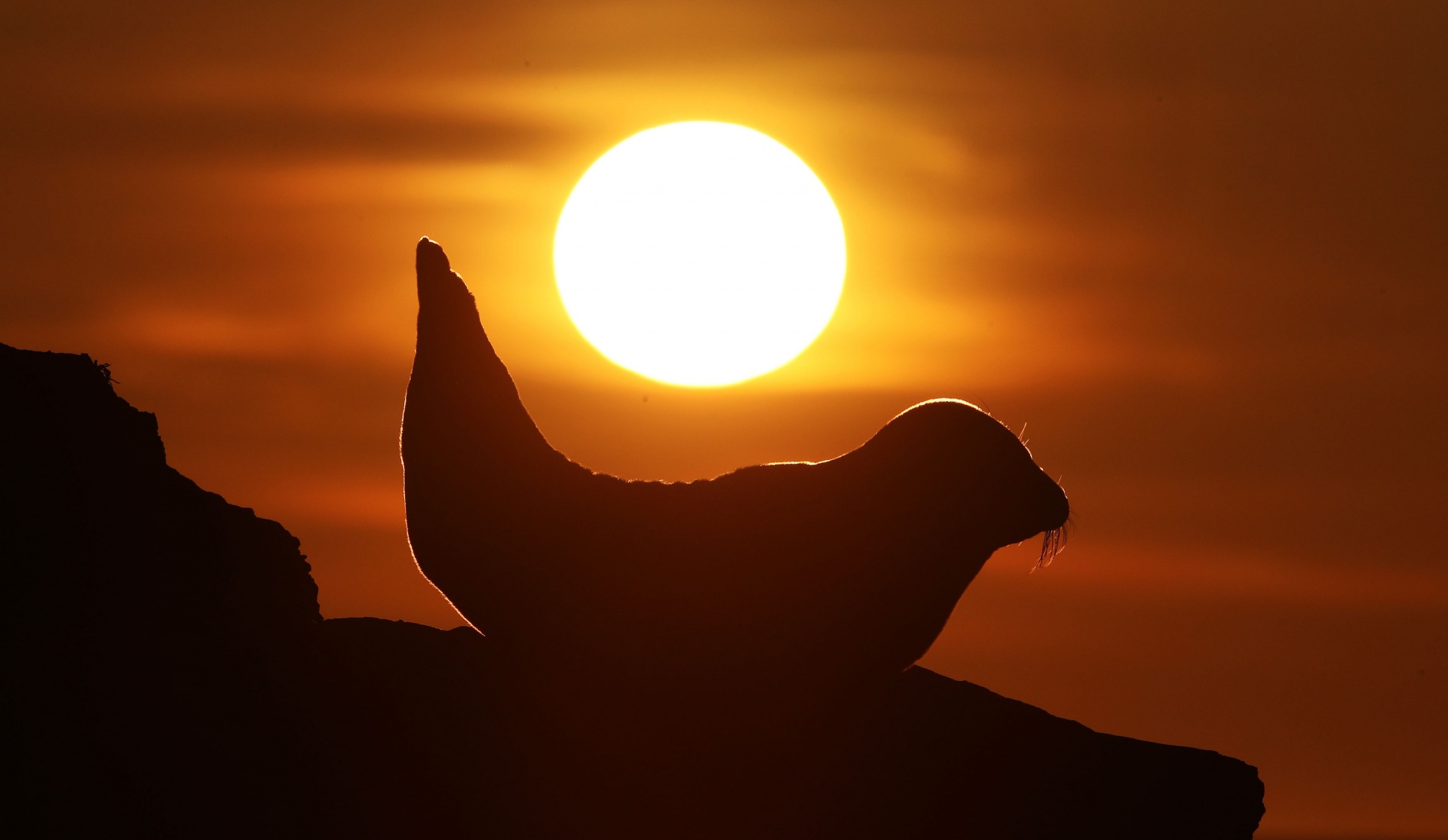 Although pupping had almost finished, the final figure wasn’t available as we went to press. We do know it is again an impressive increase on last year.

Although they are really clumsy on shore, once in the sea they are fast, agile and gymnastic swimmers.

Grey seals feed on wide variety of fish, squid, and octopus. At sea they spend 80 per cent of time under water and 20 per cent on the surface breathing.

Seals usually stay underwater for between four and eight minutes at a time, although the longest time recorded was half an hour. Seals can reach depths of 30m (100ft).

Seals are protected in Britain under the Conservation of Seals Act 1970, as well as under the Wildlife (Northern Ireland) Order 1985 and the Marine (Scotland) Act 2010.

Seals regularly come ashore on beaches or rocks to digest their food or rest. If you see one on a beach, give it plenty of space and keep dogs away.

This is especially true for seal mothers, always ready to vigorously defend their pups. 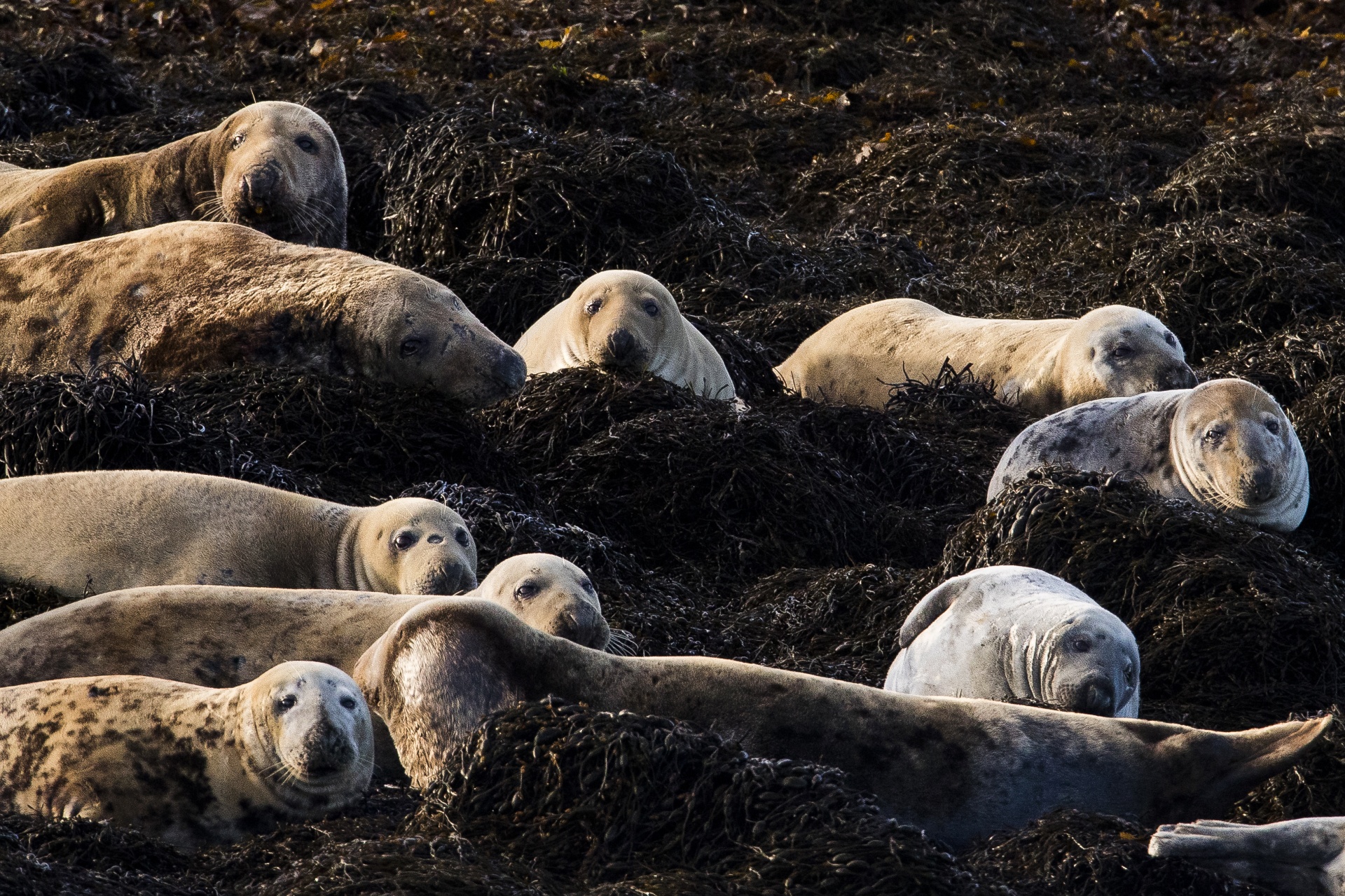 Seals are easily spooked from their rocky resting spots, so if you are in a boat or canoe, keep at least 100m clear where possible.

After they have mated, adult seals will take to the sea to feed.

After three weeks of suckling, a pup will spend another few weeks resting and growing its waterproof grey coat before following the adults into the water.

Never try to put a seal pup into the ocean — they will go when they are ready.

If you suspect a pup has been abandoned or a seal is injured and in need of attention, keep your distance and call for help.

Mum is likely to be around watching. If you are still worried don’t touch the pup but call the nearest seal-rescue organisation or the British Divers Marine Life Rescue national hotline: 01825 765-546.

Grey seals have no real enemies in British waters except the occasional visiting orca or killer whale. Orcas are quite common in northern waters.

A far bigger danger is entanglement in marine litter and abandoned fishing gear.

Pick up and bin any rope, strapping or net every time you’re at the beach. 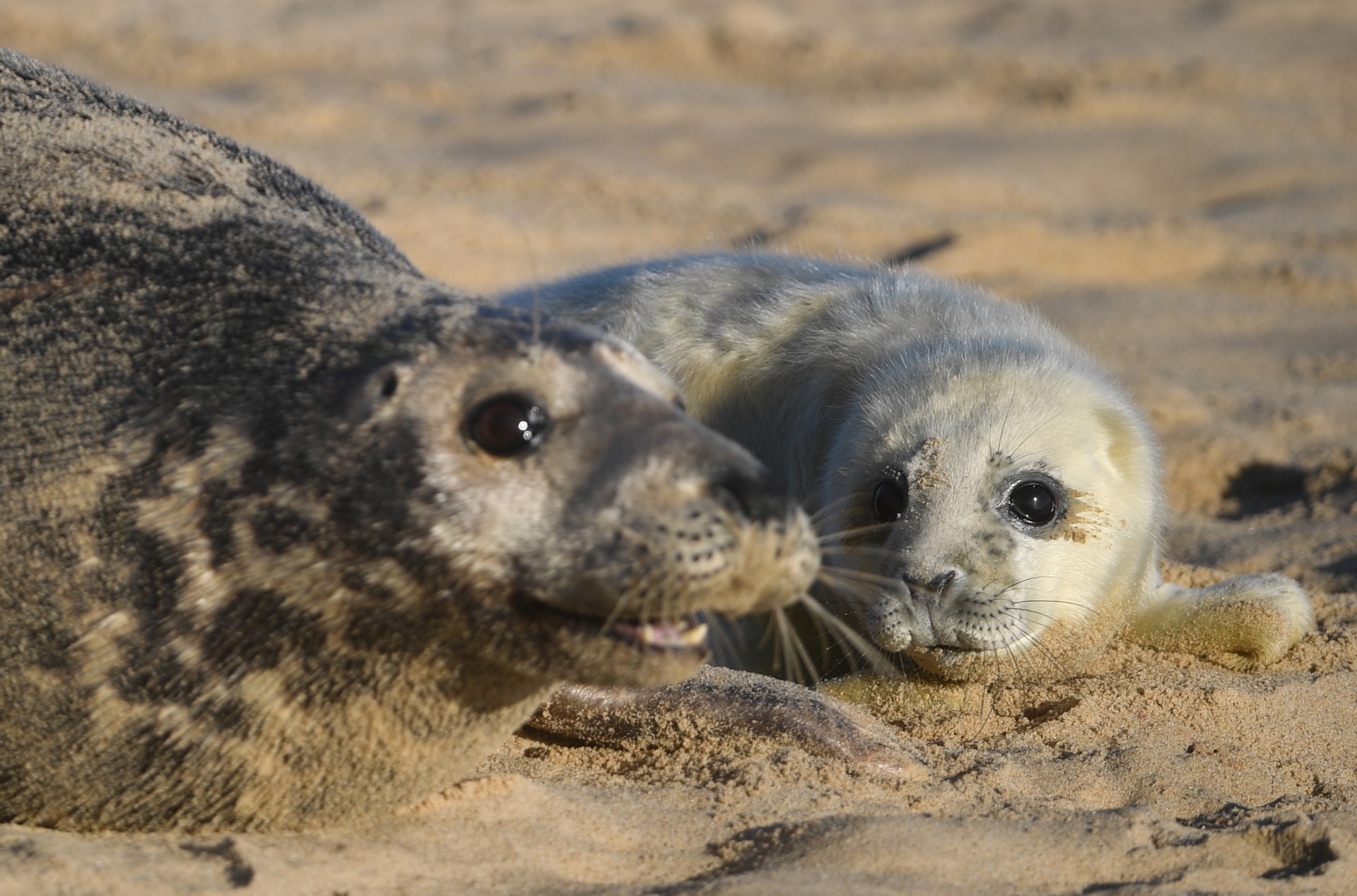 Grey seal numbers have boomed over the last three decades, with more and more making British beaches their nurseries.

So many in fact, that some fisherfolk are calling for a cull to preserve fish stocks.

The National Trust has reported record numbers in the Farne Islands, off the Northumberland coast.

The number of youngsters born at this 10,000-strong colony has risen by almost 50 per cent over five years.

If you are planning to visit seal colonies and see the pups, remember to keep a safe and respectful distance and check the latest coronavirus status: some beaches are closed.

Keep dogs on leads and never physically touch the seals or pups. Remember if you touch a pup its mother will almost certainly desert it, leaving it to struggle to fend for itself but more likely simply to starve to death.

Adult males are very aggressive during pupping — it is their mating season and can be a danger to dogs and humans if either get too close.

Better to stand well back and admire one of our coast and countryside’s greatest success stories.