Why would trade unionists wish to create a world where jobcentres send young women down the brothel, asks ANNA FISHER of campaign group Nordic Model Now!

IT’S fashionable in left-wing circles to claim that “sex work is real work” and that anyone who dares to suggest otherwise is right wing, fascist even.

If “sex work” is a real job, the trope goes, then full decriminalisation of the sex industry is the answer. 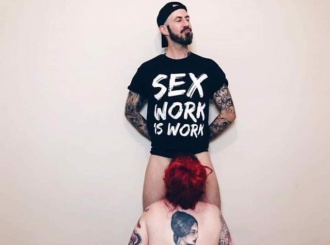 There was a photo doing the rounds on social media a couple of years ago of a man wearing only a T-shirt on which is the slogan “Sex work is work” and a naked woman on her knees in front of him ostensibly sucking his cock.

The man’s face is a picture of entitlement and self-righteousness. We do not see the woman’s face because it’s deep in his groin.

Let’s look at that photo a little longer. Look how her head is tilted back and upwards as if in supplication. Feel the stress on her neck, the tension in her body, as she holds herself there and works away with her mouth, her jaws aching.

And then you see the whole point. He needs a woman so he can be the master. A machine simply wouldn’t cut it.

Now let’s imagine the photo reversed. A woman is wearing only a T-shirt and a young man has his face deep in her groin, his head tilted slightly upwards as if in supplication, his entire body stressed.

It’s not as easy to visualise. It feels awkward. Not just because of the anatomy. But because of the way that women’s sexuality has been positioned as something shameful and dangerous for so many centuries.

And how women have been punished and tortured for their sexuality too — on a scale that’s unknown to men.

And then we need to ask, would you consider it a normal job for a young man to have to give “oral sex” to five, 10, 15 random women a day?

Can you honestly say that this is NOT significantly different from serving random strangers coffee?

But then we need to remember that in reality, this is something that men demand on a scale that women don’t. If young men are doing this so-called job, the vast majority of their “customers” are men.

Just like the vast majority of young women’s “customers” are men.

Man as master. Woman as servant. Slave. That is what this is about.

Is this what the trade union movement wants to legitimise? Is this what our foremothers and forefathers fought so long and hard for?

Men as masters. Women as servants. And a rapacious industry built on that. An industry that sucks in and profits from (mostly) young women making men masters.

As if men are not social creatures bound by rules of reciprocity. As if the young women’s health, wellbeing and sexual integrity are of no account.

A couple of weeks ago, the Unison Women’s Conference voted to lobby Unison to abandon its more than decade-long support for the Nordic model approach to prostitution and instead to back full decriminalisation.

Full decriminalisation of the sex trade is predicated on the understanding that prostitution is a normal job. It involves removing all laws around prostitution so that it is treated exactly like any other business activity.

Buying sex is no different from having a haircut. Running a brothel is just like running a barbershop. Pimps are respectable businessmen.

You don’t need to be an economist to know that this will lead to a rapid expansion of the industry. If buying sex is presented as no different from getting a haircut, of course more men will do it.

Within months, we will start to see multistorey brothels springing up in every city and out of town industrial park.

Trade unionists, please come to your senses. Don’t do this! Think of the implications for all women. The precedents it would set for all workers. Don’t buy the sex industry propaganda. Don’t betray all the good hardworking women you represent. Don’t betray the next generation. Don’t create a world where jobcentres send young women down the brothel.

Prostitution is NOT a normal job.

Tuesday 05th Jul 2022
Mexican president calls for Statue of Liberty to be torn down if Assange sentenced in US
Tuesday 05th Jul 2022
Communist Party of Ukraine banned and all its assets seized by the state
Monday 27th Jun 2022
German journalist faces three years prison over reporting from eastern Ukraine
Monday 04th Jul 2022
‘Today it is the RMT who need the support of other unions’
Monday 04th Jul 2022
The world has lost of a man of ‘peace, justice and love,’ family, friends and well-wishers hear at Bruce Kent's funeral
Join the 501 Club