A recently exposed Facebook group for supporters of the creepy aristocratic Tory is full of racial hatred and calls for civil war, discovers LUCY WOOD

YOU would not imagine that a well-spoken bespectacled gent bearing a remarkable similarity to Lord Snooty from The Beano could be a catalyst for inciting some of the most violent and worrying comments on Facebook. Yet it seems that Conservative MP, Jacob Rees-Mogg attracts exactly that kind of supporter. 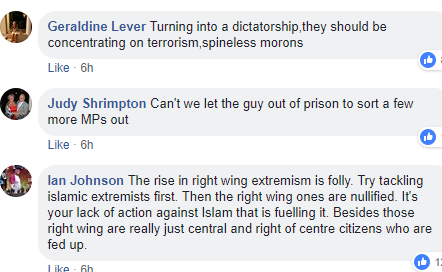 On a Facebook group dedicated to supporting Rees-Mogg are numerous comments and posts inciting violence, civil war and even “craft activities” such as making petrol bombs.

Thanks to @MatesJacob on Twitter for highlighting the various worrying comments on the Facebook page, we can see how it puts the complaints about Labour supporters calling MP Joan Ryan a “rat” or “hag” into context. This isn’t just angry insults, this is hate speech, which is inciting real violence within Britain.

Over 1,100 members of the Rees-Mogg supporters’ group voted that a civil war is likely in Britain with only 196 voting that it was unlikely. The members then went on to discuss plans for violence if they took part in said civil war.

“Julie” advises that members should join gun clubs to learn how to shoot and “Lena” offers her skills at making Molotov cocktails, while “David” recommends that we strap “a big kitchen knife” to scaffold poles and use dustbin lids as shields, while wearing skateboard helmets and pads as protection. 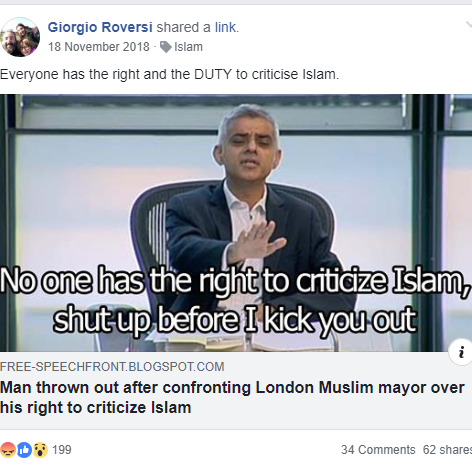 Another member called “Lee” wants to “do the dirty work” for migrants that “won’t go back to their desert piss stinking pits.”

He goes on to say: “German SS Einsatzgruppen will seem like a fucking boy scout outing compared to us pissed off Brits.” He also wants to get rid “of the shit in Government, we all know who I mean, don’t we?” 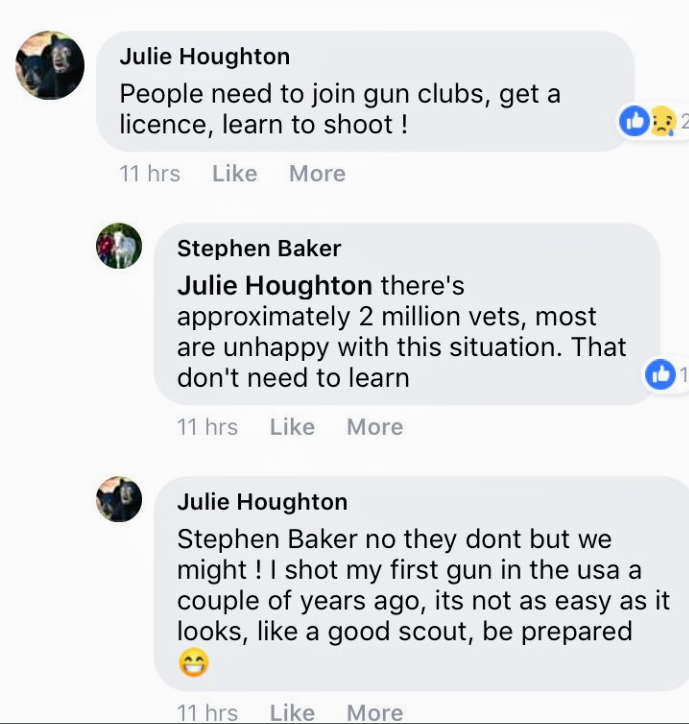 “Paula” wants to see MPs dragged out of Parliament, stripped and flogged in public.

“Paul” says: “We need our own IRA.” In another thread members are threatening to burn down Parliament, hang MPs and burn foreigners. In a recent post regarding a Guardian article about MI5 taking over the fight with the far right, which features a picture of murdered MP Jo Cox, “Dianne” says: “There is no far-right just right!”

“Pauline” says: “Then they’re going to have to imprison most of us!” 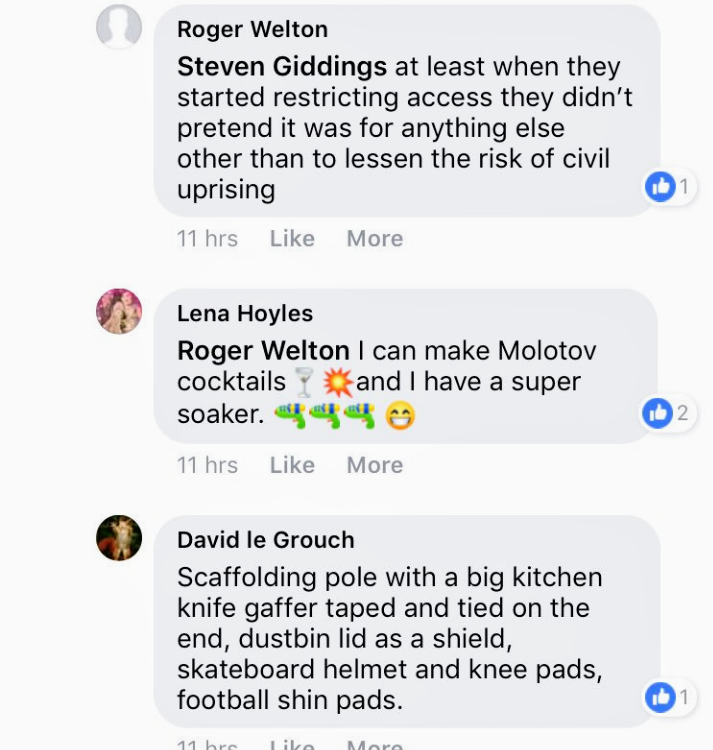 He then goes on to make several posts which he feels convey left-wing extremism, one image includes a meme of Jeremy Corbyn, Diane Abbott, John McDonnell and Emily Thornberry.

“Graham” says that “the problem is that the Establishment seems to be sliding towards the left. This means that what was once considered ‘normal’ sensible right-wing thinking is now considered ‘far right’.” 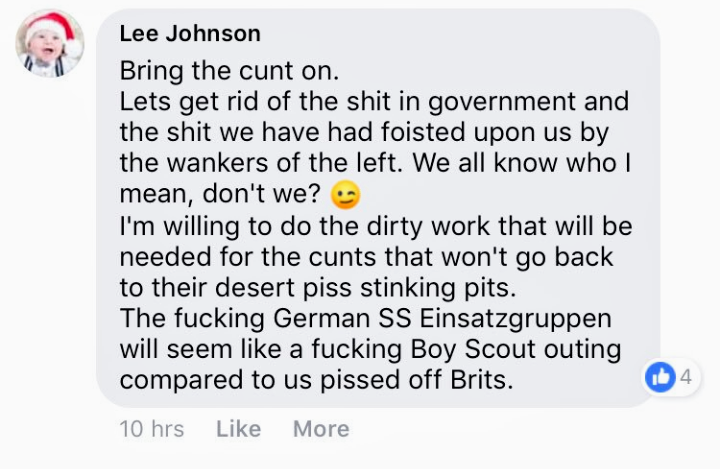 Talking about strapping knives to scaffold poles and making Molotov cocktails always used to be such sensible conversational topics before the left with their vegan sausage rolls went and made these very normal people all look a bit homicidal, right?

More such “sensible” comments ensued with a lovely lady called “Judy” asking: “Can’t we let the guy out of prison to sort a few more MPs out?”

“Glyn” then goes on to accuse George Soros of funding the extreme left. Surely that is anti-semitic trope? 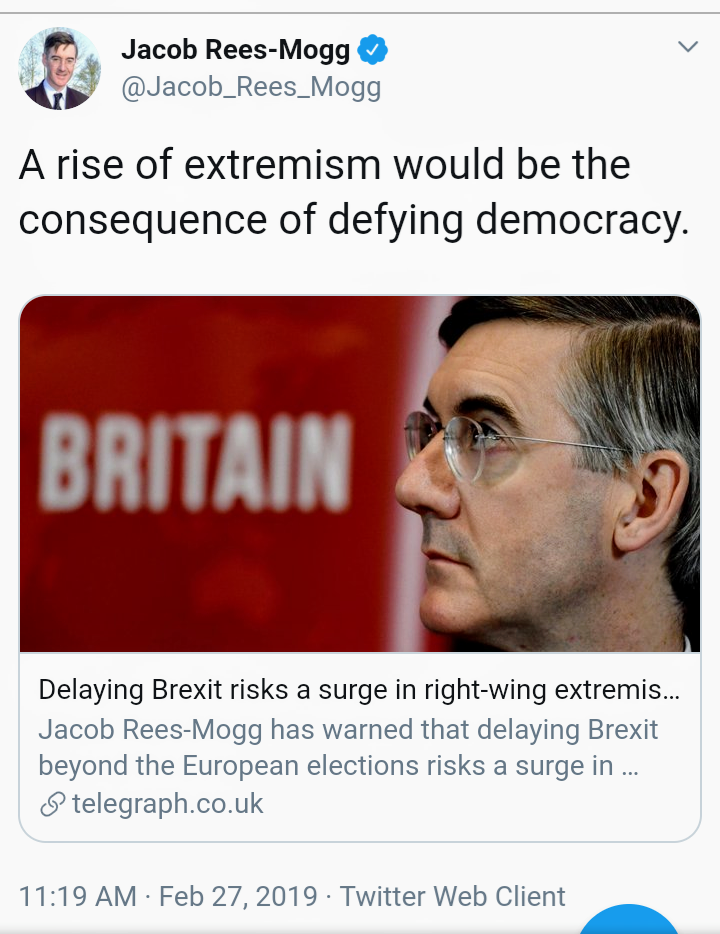 One poster shared a link of a supposed article titled “Man thrown out after confronting London Muslim Mayor over his right to criticise Islam.”

This post received 34 comments and 62 shares. The link to this post takes you to a bitcoin advert, there is no article. It is completely fabricated.

Not one person noticed this within the group, they blindly accepted that this was true and went on to claim that Islam is evil, advising that Sadiq Khan go and live in a Muslim country.

Another said he should be deported to his country of birth (it would be a short trip).

Rees-Mogg was asked for his thoughts on such comments from a group dedicated to him but at the time of writing no response had been given.

However, on February 26 Rees-Mogg warned that any attempt to stay in the EU would result in a victory for the likes of Tommy Robinson, while also tweeting the next day: “A rise of extremism would be the consequence of defying democracy.”