ROSA GILBERT salutes her comrade, the Italian revolutionary killed this week in the fight between Isis and Kurdish-led forces in Syria

ON MONDAY morning came the devastating news that an Italian YPG volunteer, Lorenzo “Orso” Orsetti, had been killed by an Isis ambush in Baghouz, the small town on the Deir Ezzor front where the remnants of the Isis caliphate are surrounded. Orsetti, also known by his nom-de-guerre Tekoser Piling, had been in northern Syria since September 2017 when he travelled from his hometown in Florence, Tuscany to defend the revolution in Rojava led by the Kurds in northern Syria, one he described as “the most beautiful revolution in the world,” “the closest thing I’ve ever found to my ideals and it is a pleasure and an honour to take part.” 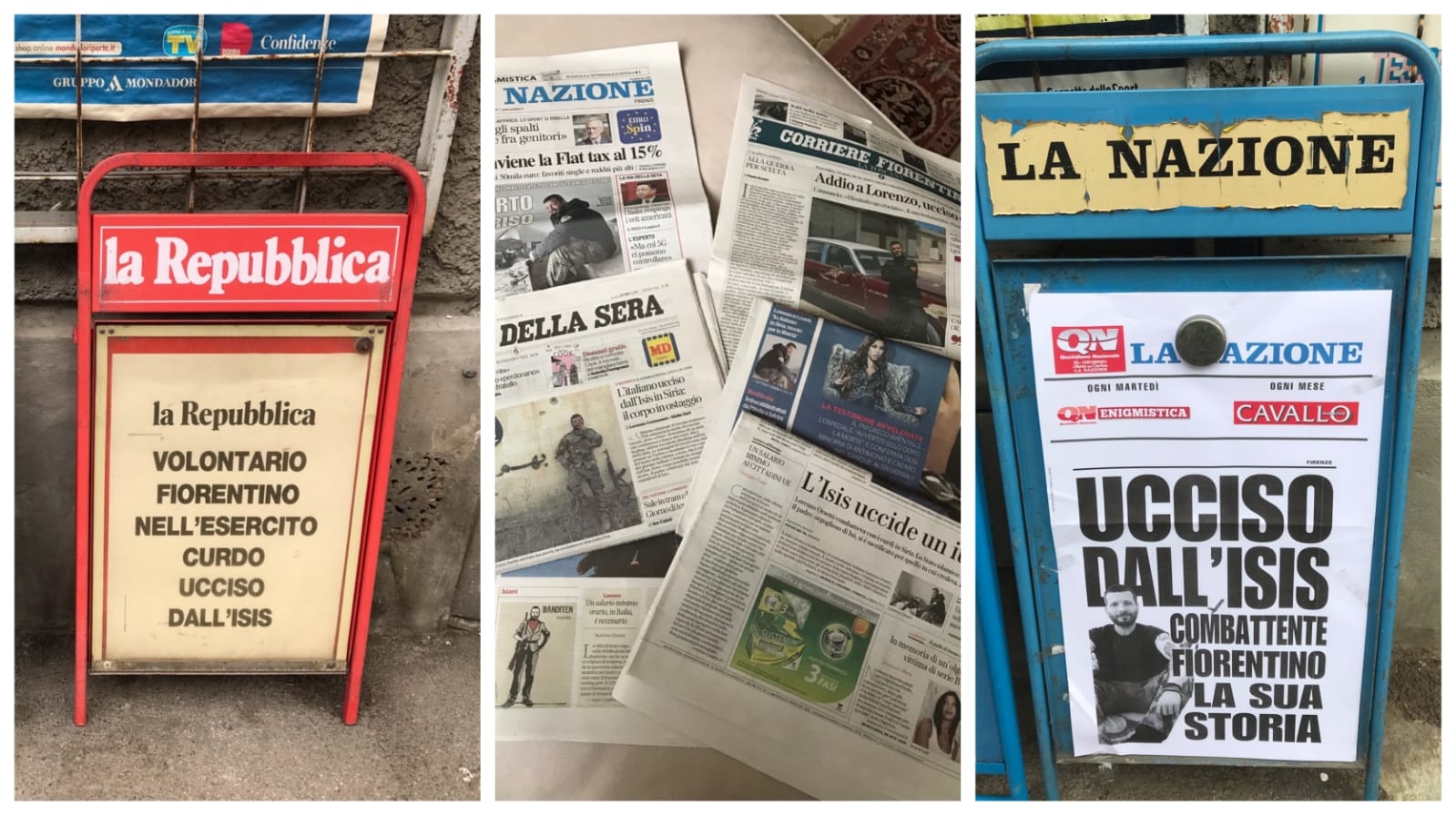 Clarifying his motivation for taking up arms in Rojava, he said that it wasn’t because he liked war or wanted fame, that he didn’t have any mystifications or delusions, simply that “freedom cannot exist without taking risks.” According to countless stories, Orso (“bear” in Italian) was an incredibly brave and selfless fighter, and whilst he always impressed on friends and comrades the need to act in an altruistic manner in his dispatches from the front line, he never boasted or exalted his own activity.

He never even told people how, whilst fighting in the hills of Afrin against the Turkish/FSA invasion in spring 2018, with defeat in sight, he refused to be evacuated with the rest of his internationalist unit, insisting on staying with the civilians to defend them from the invasion at huge risk to himself until civilians themselves were evacuated. Fighting in the hills of Afrin in incredibly difficult conditions surrounded by jihadists and bombarded day and night by Turkey’s air force (equipped by both Britain and Italy), his dispatches from the front line sounded like epic tales of guerilla warfare from the partisan resistance, swapping the olive tree-filled mountains between Florence and Bologna for those of the north-west Syrian Kurdish enclave. 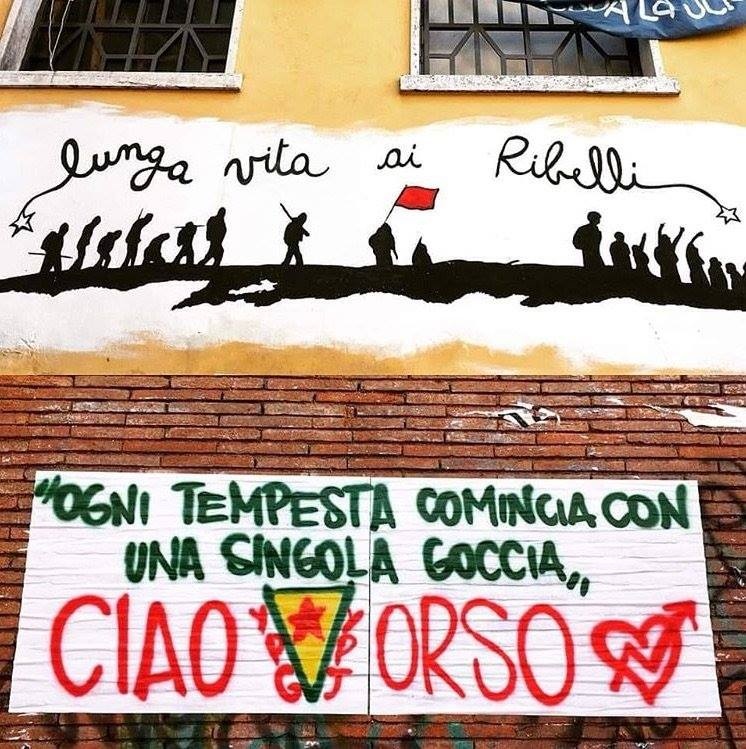 Orso came from a very ordinary family in Rifredi, a working-class neighbourhood in Florence filled with monuments and plaques to the anti-fascist partisans, many of whom hailed from the area in which he grew up. Bored by successive menial service jobs, mainly as a waiter and chef, he looked to Rojava as an escape from the drudgery and trappings of individualistic capitalist society. Not coming from any particular political faction, he was known more socially in Florence than as an activist or political raconteur, so although he had strong political ideals of an anarchist-libertarian disposition, above all he was not given to orthodoxy or dogmatism.

His anti-sectarianism was typical of his political and moral ethos of surpassing egoism and individualism, supporting solidarity events in the city from any and all political factions, fighting in an anarchist unit that was attached to TiKKO, the armed wing of the Turkish Communist Party/Marxist Leninist (TKP/ML) from which he took great inspiration. 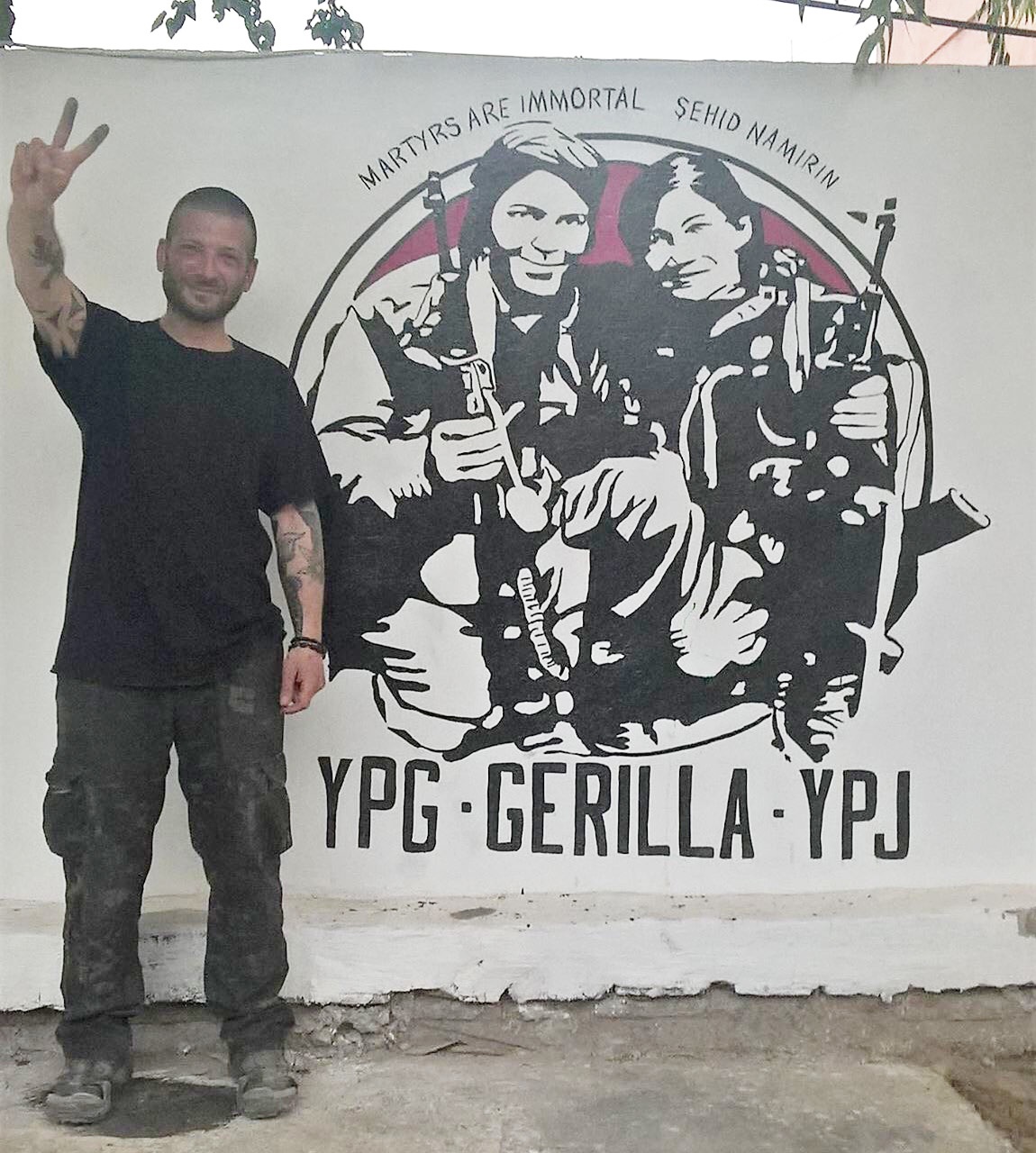 It was perhaps his knowledge of the history of the Spanish Civil War and the anti-fascist liberation of Italy that gave him this anti-sectarian drive, but also perhaps his amenable personality and his very well-attuned balance between ideological rigour and pragmatism. Quietly well-read and intelligent, he would happily defend the need for strong ideology within a coherent, disciplined movement, revolutionary practices of self-criticism and rebut attacks on socialism as “dehumanising” or “impersonal” as liberal propaganda promoting individualism.

It was this anti-individualistic quality to life as a revolutionary that gave him a sense of profound belonging in Rojava, so far away from his hometown, his friends and family, his beloved dog and the high quality tinned tomatoes that he missed so dearly — despite the paltry ingredients, his unit were always delighted when it was his turn to cook.

Addressing a meeting in Florence by video last October, where two of his internationalist comrades were speaking, Orso spoke directly to his YPG comrades to a room packed with activists clinging onto every last word: “I love you guys so much, we went through so many crazy situations together, I love you like a family. In life, even amongst comrades there’s always this deep individualism that permeates everything, but here it’s different… care and attention for others, it’s beautiful.” 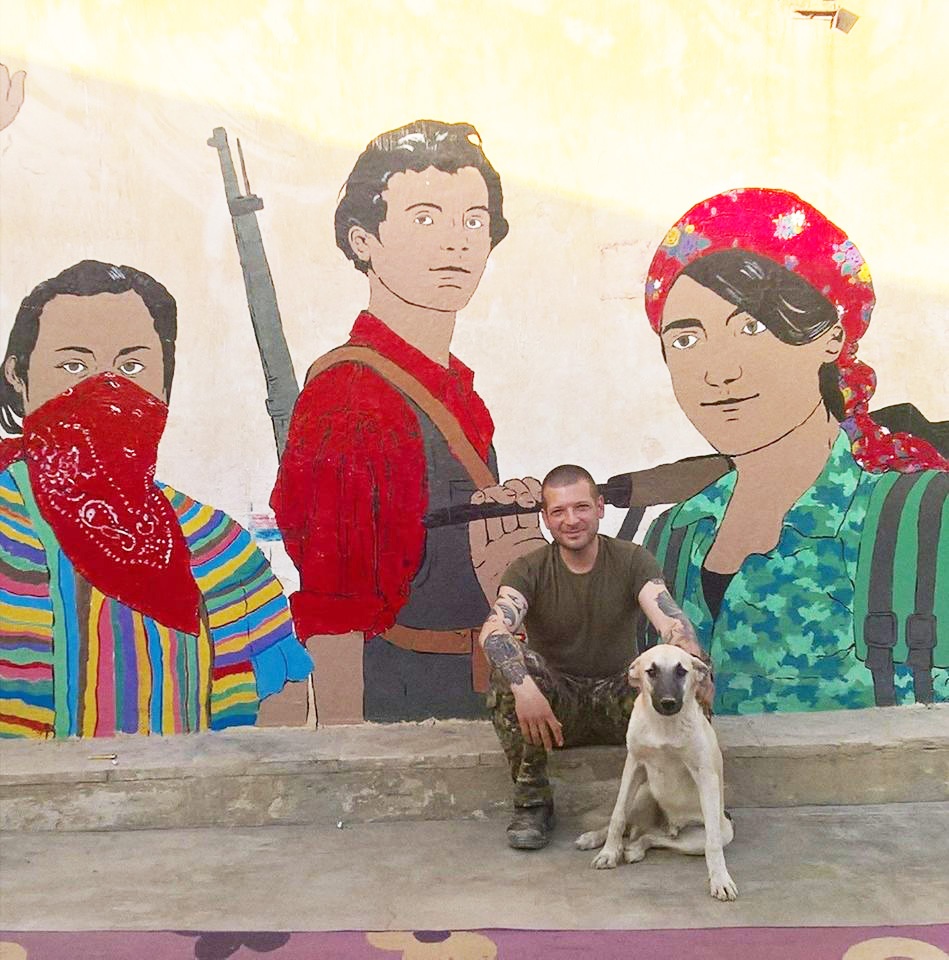 Having come very close to being killed in Afrin and numerous close calls on the Hajin and Deir Ezzor fronts, Orso was philosophical about death, writing in detail about fallen comrades and reflecting on conversations with locals as much as about the geopolitical machinations and his tales of war, which he recounted in an utterly level-headed way but threaded through with intimate minutiae. As he wrote in his final letter to be published in the event of his death (reproduced below), his dedication to the revolutionary cause in Rojava was such that, whilst wanting to live and continue the struggle, he was always ready to die, to sacrifice his life, for what he saw as a social and political revolution.

Today as I see Orso’s name and photo across every newsstand in Florence, on the front page of every major newspaper, I’m reminded of the words in his final letter encouraging us all to inspire each other and to have hope; already Orso has inspired so many, and the reaction to his death has provided hope — hope that there is still something worth fighting and dying for, where the victory is in sight, and hope in the Italian left which has reawakened, producing a deluge of tributes, banners, graffiti, just hours after his death was announced. 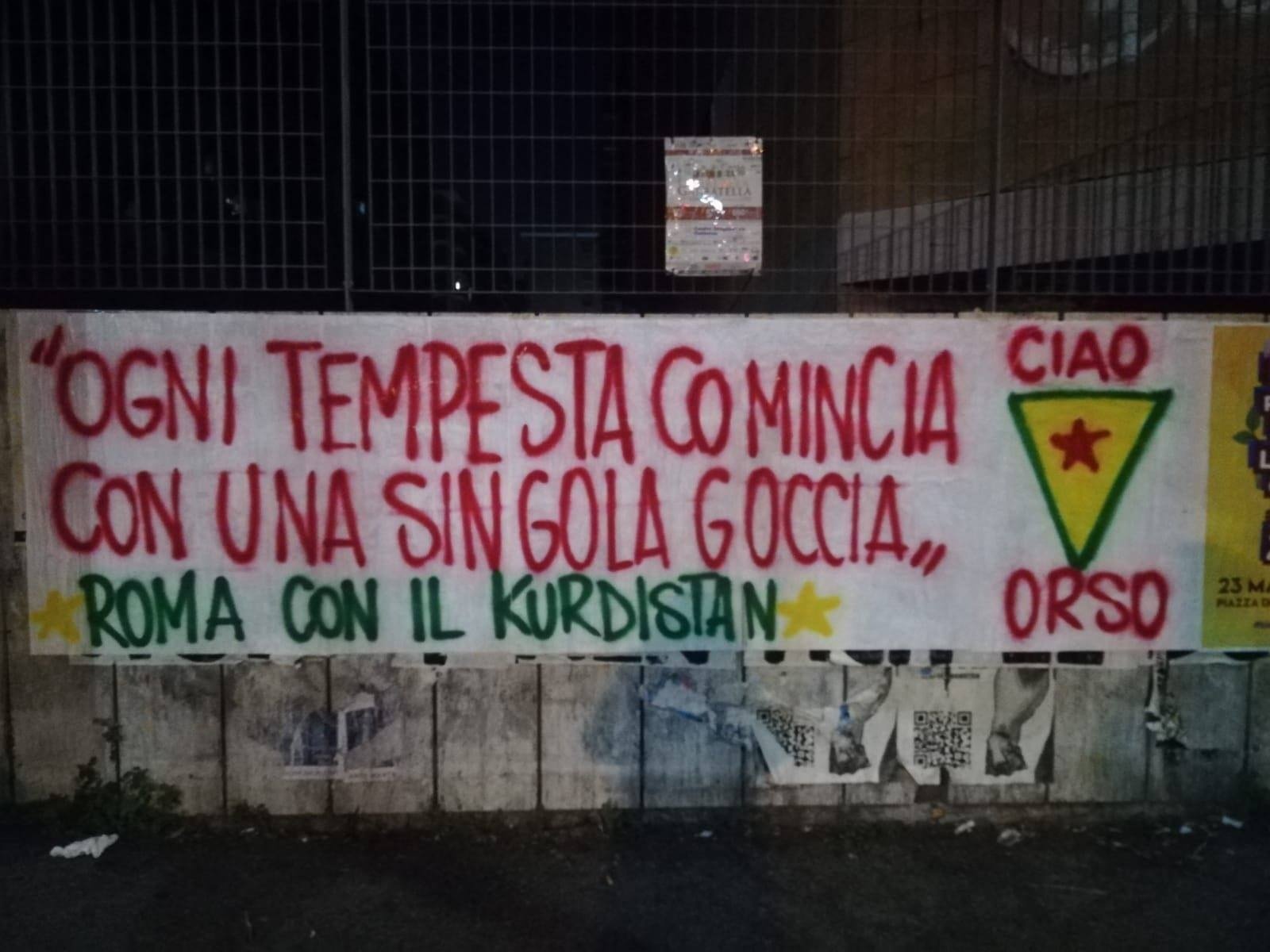 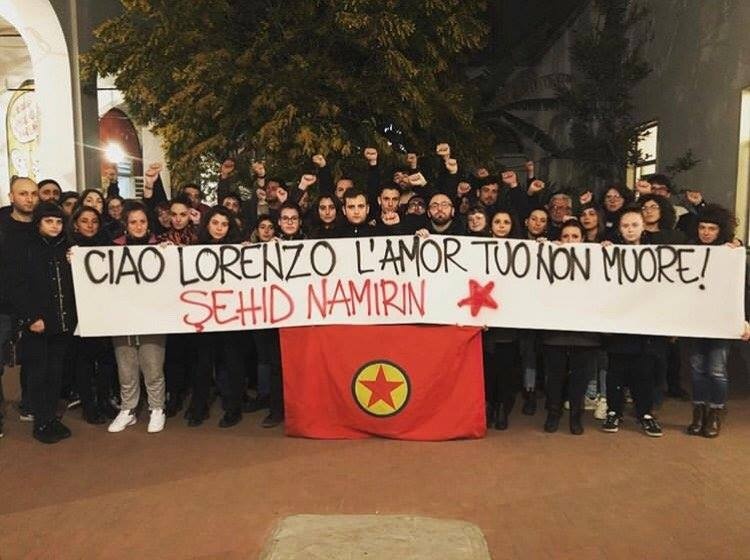 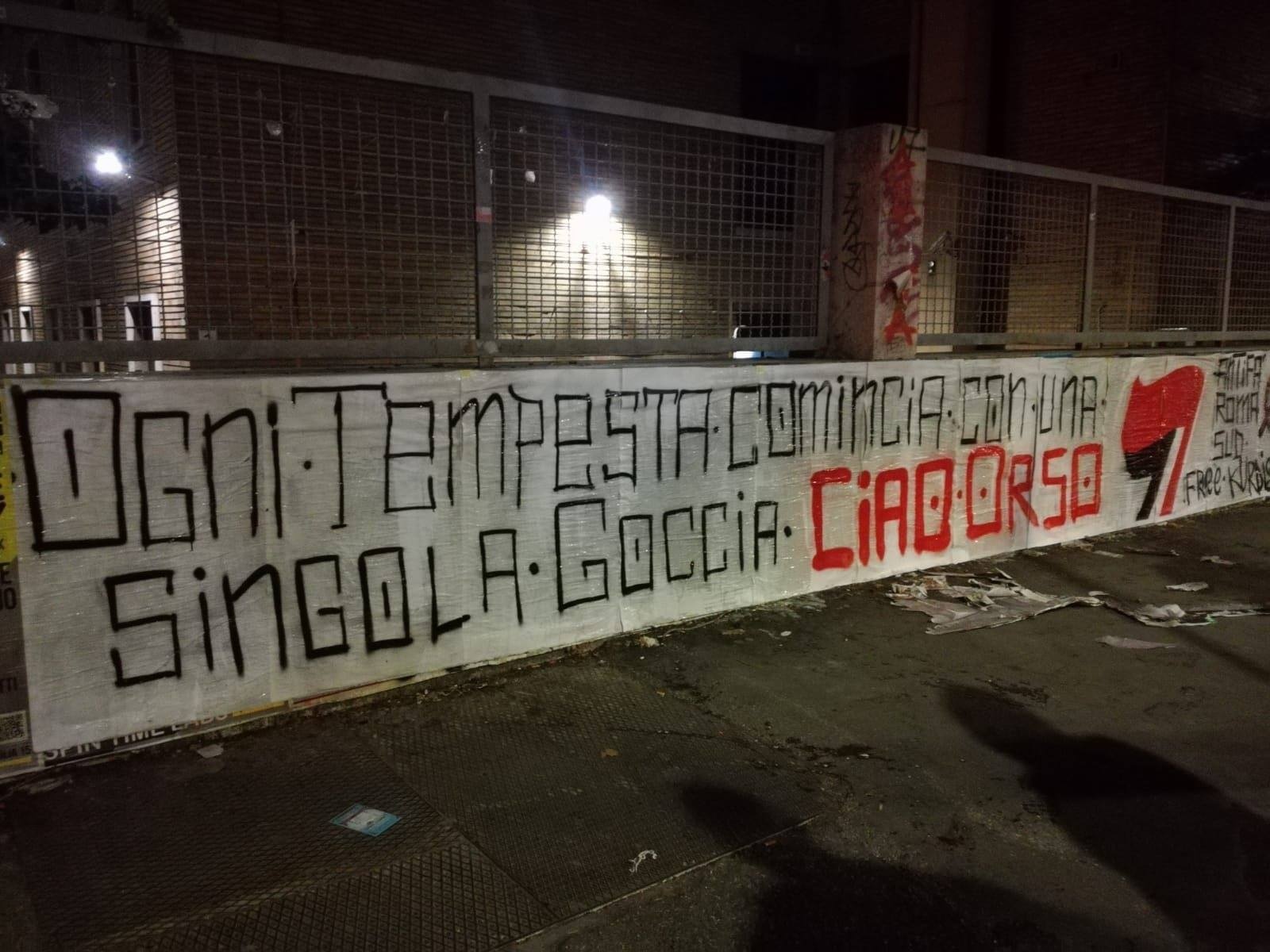 Last year during the Afrin invasion, his presence there and his regular dispatches from the front line were the guiding light for the huge mobilisation of solidarity in Florence, demonstrations, events, club nights, films, with the involvement of his musician friends collecting money for the Kurdish Red Crescent using the name “From Rifredi to Afrin.”

When his father stood up on the stage to proudly speak about Orso at the annual celebrations on April 25 — marking the anniversary of the anti-fascist liberation — we heard that the local ANPI section “Potente” (named after one of the Florentine partisans killed during the liberation of Florence in August 1944) was planning to grant him honorary partisan status in tribute to his bravery and continuance of the partisan cause.

It is a tragedy that this honour will now be posthumous. Unfortunately we don’t get to welcome Orso home, as in the partisan song “Fischia il vento” about the free, victorious partisan returning home. Instead, as in “Bella Ciao,” Orso will be buried under the shade of a beautiful flower where he fell in Rojava. But the story of the partisan bear (“orso”) who travelled from Rifredi to Rojava to fight fascism and defend a socialist, feminist revolution will serve as an inspiration for future generations in this city and across the world, just as the partisans, who have by now all but passed away, kept alive the cause of liberation, and the hope that one day we will win.

“Hello. If you are reading this message then it means that I am no longer of this world. Don’t be too sad, though, I’m OK with it; I don’t have any regrets and I died doing what I thought was right, defending the weak and staying true to my ideals of justice, equality and liberty.
So in spite of my premature departure, my life has been a success, and I’m almost certain that I went with a smile on my face. I couldn’t have asked for more.

I wish all of you all the best in the world and I hope that one day, you too will decide to give your life for others (if you haven’t already) because that is the only way to change the world.

Only by combatting the individualism and egoism in each of us can we make a difference. These are difficult times, I know, but don’t give in to despair, don’t ever abandon hope, never! Not even for a second.
Even when all seems lost, when the evils that plague the earth and humanity seem insurmountable, you must find strength, you must inspire strength in your comrades.

It is in the darkest moments that we have greatest need of your light.
And remember always that “every storm begins with a single raindrop.” You must be that raindrop.

I love you all, I hope you will treasure these words for time to come.
Serkeftin! 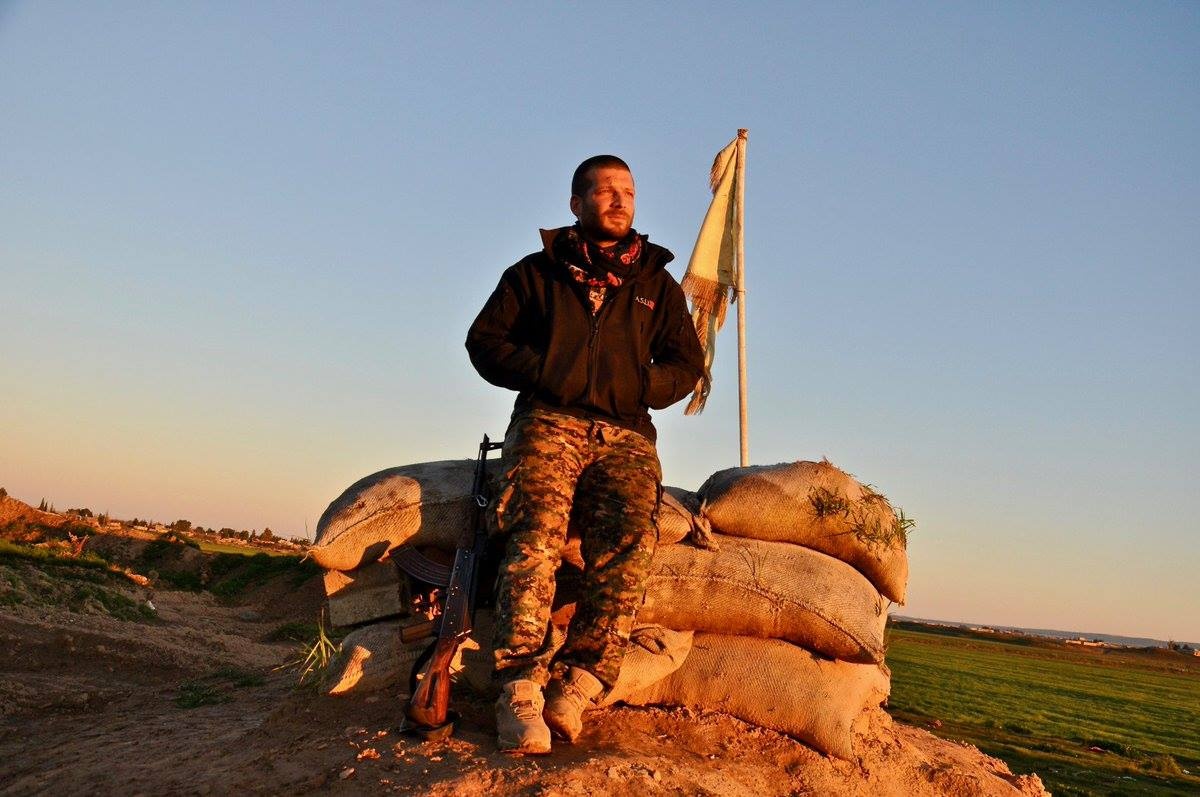