Sea-Watch International’s ship, the Sea-Watch 3, rescued the migrants 300 nautical miles off the coast of Libya on May 15 as they were escaping the war-torn country. 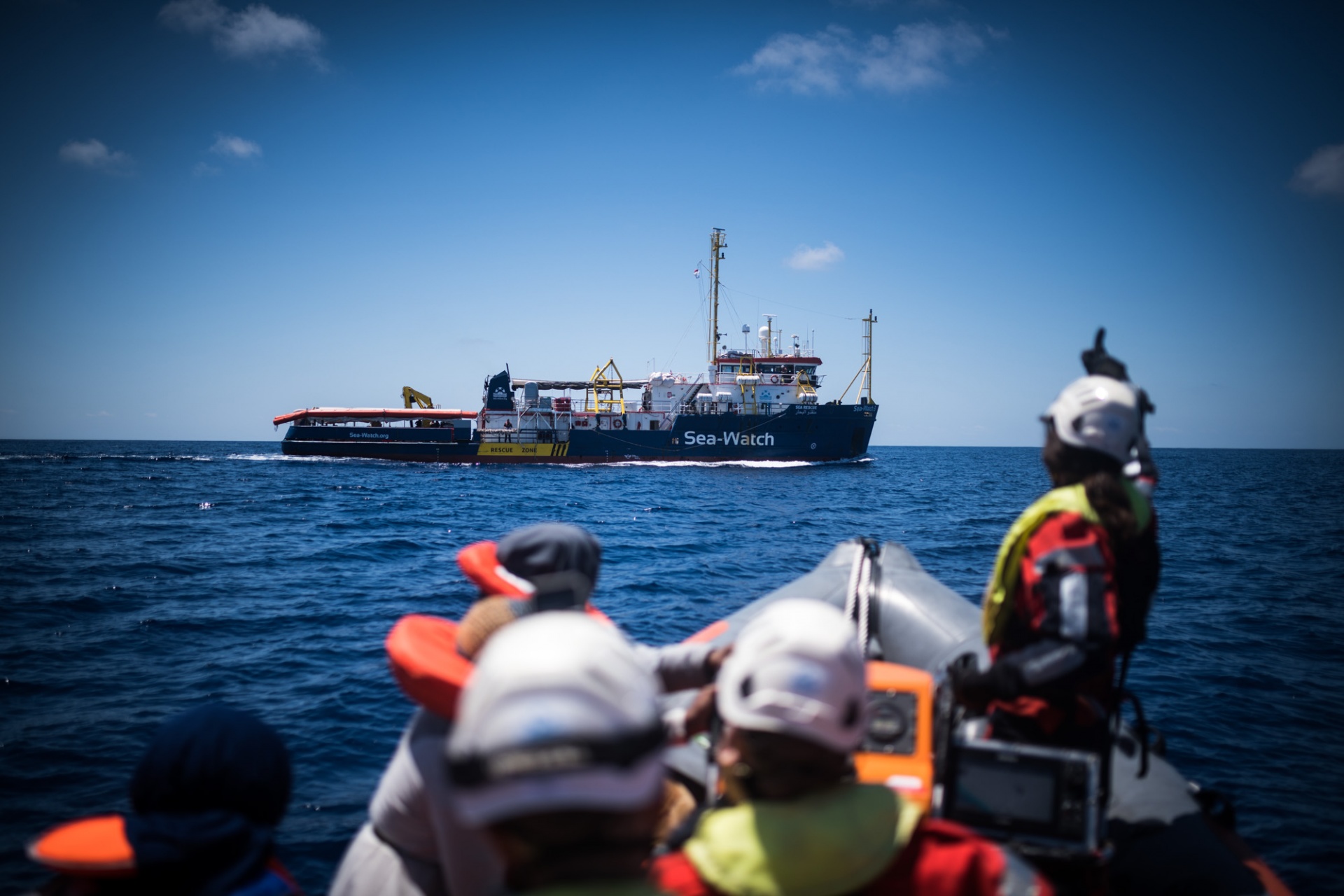 Once on board, the Sea Watch 3 crew complied with international maritime law and alerted the Libyan, Italian, Maltese and Dutch authorities of the rescue and requested a safe port.

“The 65 people rescued are now cared for aboard the Sea-Watch 3,” the NGO tweeted hours later.

“Among them are 11 women, two babies, five children and eight unaccompanied minors. Many are exhausted and dehydrated. We have requested a #PortOfSafety and await instructions.”

At dawn the following day, the Libyan Coast Guard approached the ship and ordered it to leave its territorial waters.

The Sea Watch 3 complied with the demands and headed north towards Europe, still without a safe port.

On May 17, the organisation tweeted: “The medical situation on board is a cause of great concern.

“Many people suffer from seasickness and are at risk of dehydration.

“A woman with burns needs medical treatment. Children are traumatised by remaining in Libyan prisons and risk further psychological harm.”

Later that day, the Italian authorities sent the coast guard to take the children and families on board the Sea Watch 3 to land, leaving 47 people still on board.

The partial evacuation, the crew said, caused great distress to those still left on board. Some, they said, “talked about self-harm and suicide.”

Yesterday, as the ship ran out of supplies and the psychological state of the migrants further deteriorated, the captain and crew declared a state of emergency and headed towards Lampedusa.

At 8.30pm, the 47 migrants and the crew disembarked on the island and were greeted by locals holding banners which said: “Welcome to Lampedusa” and “Whoever saves one life, saves the entire world.”

“The ports are not closed, they cannot be closed,” Sea-Watch International’s Italy representative Giorgia Linardi said.

“We have affirmed a legal duty, a moral duty, an act of solidarity: rescue at sea must be protected and defended.”

The Italian authorities are now holding the Sea-Watch 3 in “probationary confiscation.”

Among the boys we've been lucky to meet on board there is M.

Despite all the difficulties, he managed to complete this stage of his journey.

We wish him to be able to realize his dreams.

The ship only recently returned to the Mediterranean to carry out rescue missions after the Netherlands also tried to stop it from sailing.

Since the European Union suspended its migrant rescue operations in March, a number of the bloc’s member countries have attempted to crack down on NGO rescue ships.

“Everyday the #SeaWatch3 is confiscated, lives are at risk,” the group posted on Twitter yesterday above pictures of the crew cleaning the ship.

“We make the ship ready for mission right away and trust in an independent Italian judiciary that values the constitution above illegal and politically motivated directives.”

The UN’s human rights expert condemned the move and urged the coalition government to put a stop to it.

“The right to life and the principle of non-refoulement should always prevail over national legislation or other measures purportedly adopted in the name of national security,” the independent experts said.

“We urge authorities to stop endangering the lives of migrants, including asylum-seekers and victims of trafficking in persons, by invoking the fight against traffickers.

“Instead, restrictive migration policies contribute to exacerbating migrants’ vulnerabilities and only serve to increase trafficking in persons.”

Newspapers ‘turning on staff’ as revenues plummet during lockdown

Thousands of construction workers sacked without compensation in Turkey

Key workers risking their lives on poverty pay must be paid at least £15 an hour, union demands