A powerful message from Cable Street for today

IF anyone considered commemorations to be some nostalgic remembrance of things past, that notion was thoroughly routed at the weekend’s anniversary of the Battle of Cable Street.

In a series of vibrant events, hosted by the Communist Party of Britain and the Young Communist League, speaker after speaker rallied audiences to unite, to build the movement, and to pull up racism and fascism by their foetid roots. 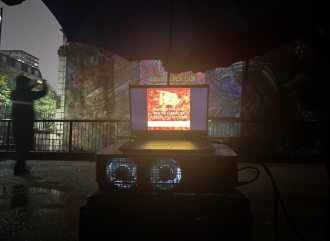 Just as the Tory Party’s conference failed to reach the faithful online, with the site inaccessible from the kick-off, the CPB and YCL were staging film projections, running short films online, stimulating scores of debates on social media and providing an afternoon of top-notch speakers.

As torrential rain hit London, YCL members were out in the streets around Cable Street itself, delivering newly produced leaflets and posters and selling the weekend’s special edition of the Morning Star. 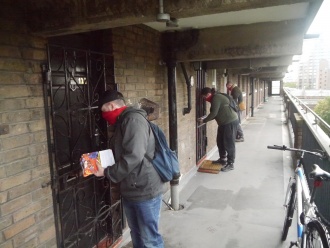 On Sunday morning, they took a new “Cable Street Forever!” banner to the famous mural itself, making history in their scarlet facemasks — socially distanced but united in solidarity.

Robin Turner, of YCL London, said: “We took to the local area around Cable Street not only to publicise its anti-fascist legacy, but also to share our message that we will not allow fascist and other divisive ideologies to rise again, and that in order to stop this, as working people we need to organise and fight for a better future together.”

In a webinar which drew up to 400 viewers (and has had more than 2,500 views since), David Rosenberg from Jewish Socialists’ Group and author of the Battle for the East End (Five Leaves), gave a chilling reminder that Oswald Mosley’s Blackshirts had four large branches among the working class in the East End of London.

“They had won some working-class Irish support, but we know that on October 4 1936, the most unionised sectors — the dockers and railway workers — united with the Jews to resist the police and the fascists.”

Notably, he said, Mosley also had branches in no fewer than 20 public schools.

“Young fascists were not only the street thugs beating up East End Jews.”

He gave a reference made by so-called statesman Winston Churchill to “a worldwide conspiracy for the overthrow of civilisation; the part played by international and atheistic Jews in Bolshevism and the Russian Revolution probably outweighs all others.”

The Jewish People’s Council against fascism and anti-semitism, in 1936, was a grassroots organisation with a lot to teach contemporary activists, he said.

Communists and trade unions played a very significant role. Frustrated by the authorities failing to stop fascism in its tracks, they built their own united front, with Jewish and non-Jewish speakers at outdoor meetings.

Where the British Union of Fascists had sought to divide communities, they bonded.

“Fast forward to today … the far right are rehearsing arguments to blame immigrants, refugees and Muslims for the economic crisis, but they cannot credibly blame other poor people for running the economic and political system!

“So they revive conspiracy theories against some wealthy Jewish figures. Our fight against anti-semitism, Islamophobia and anti-black racism must be completely joined up, conceptually and practically.”

Farhana Zaman, of the Bangladeshi Workers’ Council and Chair of Tower Hamlets Unite Community branch, recalled growing up in the area: “We fought against racism, but there were no such thing as Islamophobia.

“I started wearing my hijab, so then ‘I’m a Muslim’ seemed written on my forehead.”

Watching the horror of the September 11 2001 terrorist attacks on TV, she said her family wept, “but we didn’t realise that would backlash on ordinary Muslims.”

Getting involved in campaigns against the war, she saw how “imperialist wars in the Middle East led to the creation of Isis.

“Lots of innocent people got spat at. Hijabs were ripped off. It was a horrifying time — and some of it is still happening.

“Muslims have replaced Jews as the principal enemies of the West.”

The way forward, she argued, was in unity.

“It is about educating one another. We need to empathise, to feel each other’s pain. It is one common struggle, one common cause.

“We must become one ocean. We are all like streams, like rivers, going into the one ocean.

“We need to show unity for one another.”

Marlene Sidaway, president of the International Brigades Memorial Trust, spoke of the unity shown towards the Spanish Republican government.

“It was a worldwide movement supporting Spain … It was the kind of solidarity and social reform that millions of people wanted. With Aid Spain, people sent what they could. It’s amazing the amount of money they were able to collect and send to Spain.”

Looking at what was learned from the Spanish civil war, she quoted Albert Camus: “It was in Spain that [my generation] learned that one can be right and yet be beaten, that force can vanquish spirit, that there are times when courage is not its own recompense.”

Roger McKenzie, assistant general secretary of Unison, said we all drew inspiration from the Battle of Cable Street.

We needed “eternal vigilance”, and we could not opt in and out of anti-fascism, as if it were a fashion.

“Just because someone is a member of a trade union, or is fairly pleasant in a workplace, doesn’t mean that they do not harbour these racist or fascist beliefs. We have to tackle it wherever it comes up,” he said.

“We beat racism with solidarity. Nobody will do this for us — we have to be the ones that stand up together.

“We draw inspiration from all those battles that went before — that will give us the courage, and give us the hope to stand up in the battles we are to face in the future.”

Harsev Bains of the Indian Workers’ Association said the IWA was formed shortly after the Cable Street event, in 1938.

Their work in trying to get documentation for undocumented migrants was a battle that continued.

A theme which emerged during the webinar was on the desperate need for education on British colonialism.

Mary Davis, historian and author, said this history had to be taught in schools: “Understanding British imperial history is key. I don’t trust the British education system, which is now privatised … They’re not going to undermine themselves by teaching the truth. It’s up to us to do it.”

Nisar Ahmed of the Communist Party executive said: “We have to start from where people are, and then build up trust. The only solution is a class solution, that links culture, politics, economics.

“Nationalism is not a solution — it is a cul-de-sac.”

He applauded the Communist Party’s re-energised work on housing.

“If Phil Piratin [Communist MP for Mile End] and others were around in Tower Hamlets now, they would start campaigning on housing.”

There’s something very special about that mural in Cable Street, where artistic talent has created visual movement; policemen cling to their wildly bucking horses, Hitler, in his underwear, falls headlong as a chamber pot is emptied from above; a hammer and sickle flag is waved like a toreador’s cape.

It’s full of life. There is the remembrance of things past, true, but there’s also a powerful message for all of us.

It’s an instruction, from the ghosts of Cable Street, to fight on.

As Mary Davis said, ending the webinar: “We won the battle — we have not won the war.”